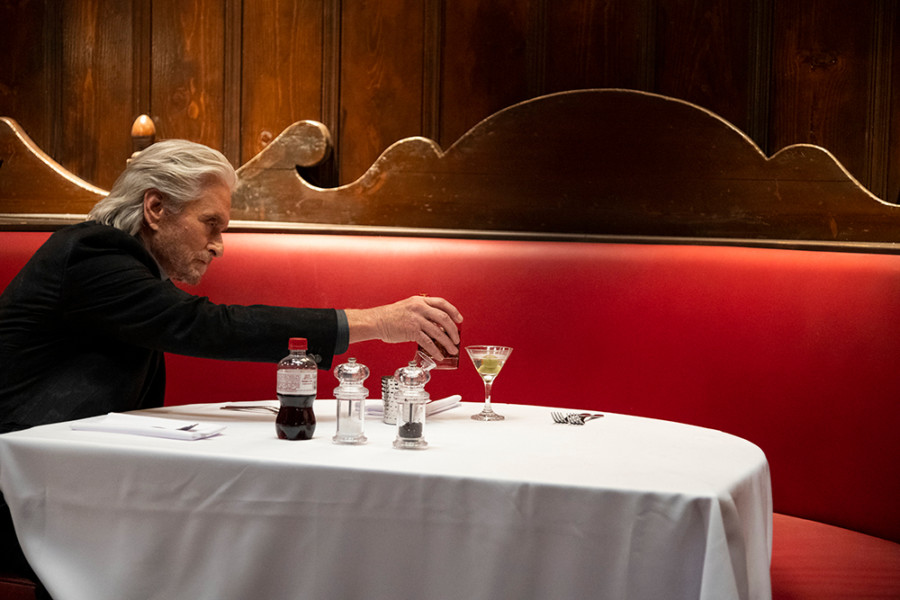 KOMINSKY KOMING BACK — (Via Deadline) Netflix has unveiled the season three trailer for The Kominsky Method, which teases a Norman Newlander-less final chapter.

Set to premiere on May 28, The Kominsky Method season three will no longer feature Sandy Kominsky’s (Michael Douglas) dear friend and agent Norman Newlander (Alan Arkin). Back in September, Deadline learned exclusively that the Oscar-winner would not return for the Netflix series’ third and final season.

Though the trailer doesn’t reveal anything specific about how Norman passed, it teases scenes of Sandy and his closest friends at the agent’s funeral. As some are in the dark about Arkin’s exit from the series, The Kominsky Method characters are left wondering about what led to Norman’s death.

“Scientology,” one character speculates in the trailer.

In season three, Sandy must navigate what aging looks like without Norman by his side. Life only becomes more complicated with the arrival of Sandy’s ex-wife Roz Volander (Kathleen Turner). The pair’s volatile relationship is further inflamed when she comes to L.A. to spend time with their daughter Mindy (Sarah Baker) and her boyfriend Martin (Paul Reiser). Season three, which consists of six episodes, will also deal with money, death, love, murder and dreams coming true. The series also features Lisa Edelstein, Emily Osment, Graham Rogers and Haley Joel Osment.

When season two ended and we learned there’d be as final season three, I posited that having Sandy land a big role and ensuing fame … would be a fitting end. Guess what? It looks as though that will happen with director Barry Levinson, telling Sandy … “I want a new face … that’s an old face.”

All I can say is, Chuck Lorre … call me!

OLYMPIA DUKAKIS PASSES — Olympia Dukakis, who won an Oscar for her supporting role in the 1987 hit Moonstruck and also starred in Steel Magnolias, Away From Her, the three Look Who’s Talking films and Mr. Holland’s Opus, died Saturday at her home in New York City. She was 89 and had been in ill health for some time.

“My beloved sister, Olympia Dukakis, passed away this morning in New York City,” wrote her brother Apollo, who confirmed her death on his Facebookpage. “After many months of failing health she is finally at peace and with her [husband] Louis [Zorich].” The cause of death has yet to be determined.

Her television credits include the 1993 transgender drama Tales of the City and its 1998 sequel, which earned her an Emmy nomination. Dukakis also appeared in Netflix’s 2019 revival, titled Armistead Maupin’s Tales of the City.

Dukakis was a theater veteran who struck gold in the film business later in life. She was 56 when she played Cher’s sardonic mother, Rose Castorini, in Norman Jewison’s classic romantic comedy Moonstruck. Her portrayal of a woman overly involved her daughter’s love life earned her an Academy Award, a Golden Globe and a BAFTA nomination.

1988 was a year of prominence beyond the Oscars, as Dukakis’s cousin, former Massachusetts Gov. Michael Dukakis, was the Democratic nominee for president. She stumped for him during her Oscars acceptance speech, shouting “OK, Michael, let’s go!”

A lifelong activist and philanthropist, Dukakis earned a star on the the Hollywood Walk of Fame in 2013.

She graduated from Boston University with a degree in in physical therapy and a master’s in performing arts.

She then began her career in New York City. She made her debut in The Aspern Papers in 1962. That same year, she married actor-producer Louis Zorich, famous for his hit NBC comedy Mad About You decades later. They had three children.

In 1963, she won an Obie Award for A Man’s a Man, and then a second two years later in The Marriage of Bette and Boo. Her work in the Broadway comedy Social Security playing Marlo Thomas’s mother was her ticket into filmdom.

She was absolutely stunning in Moonstruck; which I can’t quite believe was 1987. Btw: Whatever happen to its author John Patrick Shanley … what a great, great writer.

Shanley did Tweet on her passing: My beautiful friend Olympia, the matriarch of Moonstruck.

Talk about beginning a career later  in life, she was 56, but just sensational, She’ll be missed for sure. Rest Easy Olympia!

SHORT TAKES — PR-pasha David Salidor sent us a treasured photo -from around 1988- when he repped teen-titan Debbie Gibson and they attended an Elton John-concert in Cincinnati. That’s lyricist Bernie Taupin too in the shot. Great one for certain … Ben Affleck back on with J’Lo? Say it ain’t so …

Lana Del Rey’s “Chemtrails Over The Country Club” is just a terrific song. Check out the awesome video: https://www.youtube.com/watch?v=vBHild0PiTE … DC Entertainment’s digital comic convention DC FanDome is returning this fall. The virtual event, which last year consisted of online panels for the comic brand’s TV, film, and publishing titles, will take place Oct. 16, it was announced this week …

G. H. HARDINGJune 10, 2022
Read More
Scroll for more
Tap
Nomadland Scores Big And Quiet Driving Through Those Internalized Badlands
What to Watch in The New Year: May 4