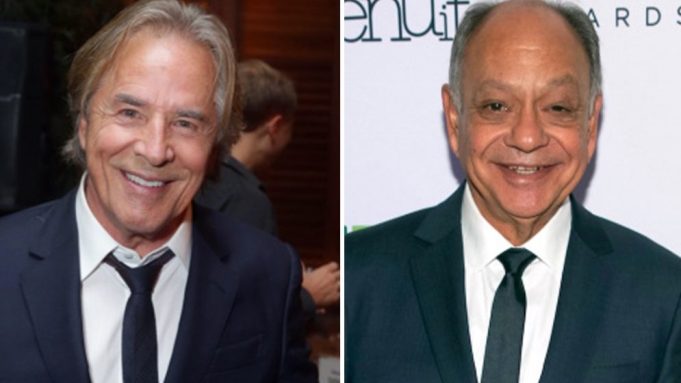 The movie brings Johnson and Marin back together as elite investigators for the San Francisco Police Department Special Investigations Unit. The revival, which has been in development at USA since 2019 as a two-hour movie, comes from Johnson, Bill Chais (Franklin & Bash) and Marc Rosen. Village Roadshow Television, which also controls rights to the property, is producing.

Somerville plays Christina Hunter, a psychiatrist who contracts with SIU to evaluate cops.

Kilpatrick wrote and starred in the Viola Davis-produced digital series American Koko, receiving an Emmy nomination for her role. Her other TV credits include Perry Mason, The Practice and The Last O.G., on which she also served as a writer. She’s repped by CAA and Artists First.

Somerville starred in CBS’ medical drama Code Black and also is known for her roles on Friends and NYPD Blue. She most recently recurred on CBS’ drama Blue Bloods and will next be seen in a recurring role on the upcoming Starz series Heels.

Nash Bridges was Johnson’s prized-series after shooting to icon-status in Miami Vice. He created the character and series after some assistance from Hunter S. Thompson; Johnson’s Aspen neighbor. Johnson has since said, it was a terrible idea initially, but Hunter as there and collected a sizable royalty.

The series had Johnson again, in designer clothes and driving a vintage Cuda, but there was a decidedly fine line between some humor and some drama. He even had Vice-partner Philip Michael Thomas on as a guest star. A classy thing to do for sure.

It’s worth noting that Lost-creator Carlton Cuse had a major hand too in the creation of the character (along with Shawn Ryan who went onto creating The Shield with Micheal Chiklis); and, even wrote some terrific shows. Its on Icon TV right now and sure there was laughable episodes, but overall, Johnson was terrific.

Years after Bridges went off; he sued for unpaid royalties and was granted a small fortune – 19 million. It was, and is, a great show. This is certainly one re-boot I’m looking forward too.

JUST FRIENDS — HBO Max’s long-gestating and much-hyped Friends reunion went live last Wednesday night at 3:00 AM. I watched it the following night and like probably every fan, loved it. It was, to quote my colleague Roger Friedman: like a Friends-infomercial.

I was intrigued by the behind-the-scenes machinations and certainly enjoyed the snippets of old episodes.

The cast looked great, though Matthew Perry became the subject of much speculation. Sure, he’s had his troubles so the trolls were certainly out. Much was made of him slurring some words, but to be honest, I didn’t catch it at all. Sure, he looked a little worse for wear, but he seemed fine.

With David Schwimmer clearly in charge, they played a game referencing old episode’s by way of a test. One question centered on who was the hand model in an episode. Turned out it was actor Thomas Lennon; who was Felix in the Matthew Perry-reboot of The Odd Couple.Nothing was said about that and other than a quick wink from Perry to Lennon, that was about it. Odd for sure. For the record, I thought it was a pretty fantastic re-boot and both Perry and Lennon were great.

Matt LeBlanc looked great, but it was immediately apparent he had put on a lot of weight. One critic quipped; he had a year to prepare for this and surely should have lost that excess weight. To be sure, his comments were funny and he was there 100%.

The girls were great, although Cox’s facework more than once sounded the alarm. She almost didn’t look like the same person. Aniston looked spot on perfect.

It was a good show for sure. Will we see another one? No way. This was it.

SHORT TAKES — HBO’s Mare of Easttown had its series finale Sunday night. It was a good series, not great. If Kate Winslet wasn’t in it, I doubt whether it would have generated as much attention. It was not Succession … I’ve been tuning into The Mosquito Coast and though its terrifically well written and acted (Justin Theroux); six episodes  in and I still don’t have a clear picture of why the family is running, Believe it or not, I had the same issue with the original movie, starring Harrison Ford, in 1986.. Confusing then, confusing now …

The season-18 finale of NCIS saw Agent Bishop (Emily Wickersham) dismissed Too bad, she was a great character. The ending saw Gibbs (Mark Harmon) jetting along on his newly built boat, Rule 91, and then it suddenly exploded leaving Harmon in the water for a moment … then swimming away. Clever for sure …

NBC’s Debris done? Word came last week that the network officially canceled Debris – the show by Fringe-creator Joel Wyman. There were only a handful of episodes and the show did take its time starting up, but the final episode, Celestial Body was just excellent and introduced Fringe-actor John Noble as a new character. Sci-fi shows, as we’ve noted before, do take their time in setting up a proper story. Honestly, I would have bet on a renewal. Hopefully, Debris will find a new home as that final episode was a gem … Micky Dolenz riding high with his new album Dolenz Sings Nesmith, appears at Steel Con on June 11-13 (https://www.steelcitycon.com/) …

RIP B.J. Thomas and RIP Gavin MacLeod. What a monumental actor MacLeod was; from McHale’s Navy to The Mary Tyler Moore Show to The Love Boat; just a masterful body of work.