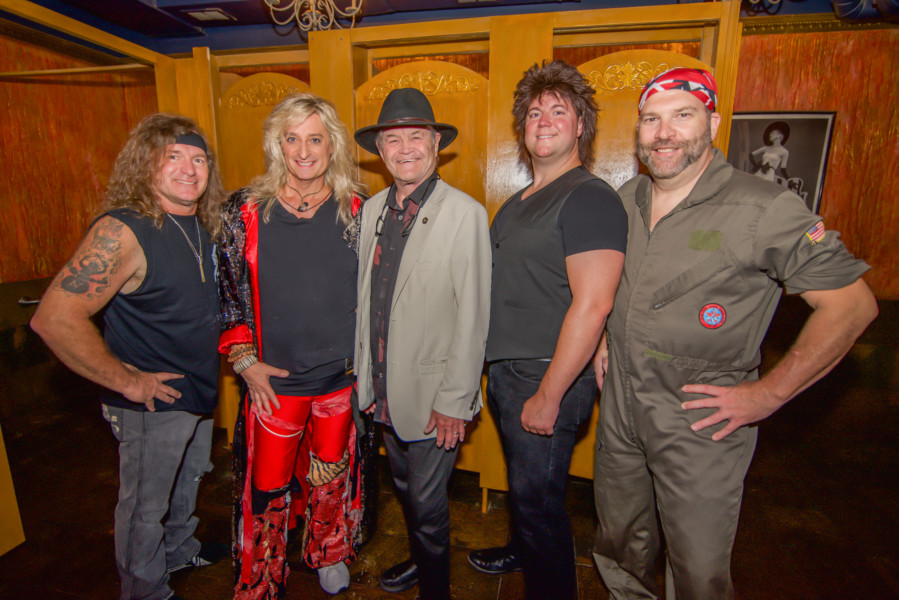 ROMEO DELIGHT DID DELIGHT — We’ve been tubthumping the event for weeks, but Romeo Delight’s debut at Steve Walter’s Cutting Room Saturday night, was a celebration in several ways. It was the group’s first time there and Micky Dolenz (riding hot with his hit Dolenz Sings Nesmith album on 7a Records) was front-and-center cheering them on. Dolenz has been a fan for years; even using the outfit as his backing band a few years back.

Before they even hit the stage, they did some photographs with Getty-photographer Gary Gershoff and Dolenz in their dressing room and (believe it or not) in the lavishly appointed Ladies Room. With Dolenz’s pr-man David Salidor on hand and quickly arranging all the participants, it made for a terrific setting. Salidor also had engaged ace-lenseman Jeff Smith to shoot the night’s performance.

From there Salidor led Dolenz to the stage where he delivered an impassioned intro for the group. If you don’t know it, tribute-bands are currently the #1 form of live entertainment. In fact when The Cutting Room re-opened last Thursday, the group performing was an Allman Brothers tribute-band. Walter event mentioned last night, that he had a Steely Dan-tribute outfit as well coming up.

Pink Floyd has three; Led Zeppelin two; Genesis three and Bill Joel, even stole his current guitarist from one. So, there you go.

The band opened with “Unchained” truly on of Van Halen’s biggest hit and their next two selections, “Dance The Night Away” and “Everyone Wants Some” got the room moving and shaking. Guitarist Kevin Somerville was spot-on with his Eddie Van Halen moments. Wielding a guitar that looked suspiciously like the Van Halen-original one, he was spot-on terrific.

Joby Parendier on bass guitar and Michael Natalini on drums were exceptional all night. Natalini told me later on that Micky Dolenz was the reason he took up drums. Nice.

Mid-set’s “Finish What You Started” was perfect as were “Panama,” and “Ain’t Talkin’ Bout Love.” As the show ended, Dolenz bounded onstage once again to give them a rousing review.

Talking with Buddy Blanchard after the show, he said that an original recording may well be in the future. He also talked about recent shows at New Jersey’s Landis Theater and another one at Daryl’s House – both of which were richly rewarding. Mid-sentence he was gently interrupted by Salidor, who said that a gig at My Father’s Place had just locked in.

Romeo Delight did delight for sure. An exceptional evening.

HAPPY ENDING FROM BRUCE — Good news for international fans of Bruce Springsteen: The Boss’ upcoming Springsteen on Broadway is opening its doors to people who have received the AstraZeneca Covid vaccine.

Last week, the production announced that all ticket-buyers would need to be vaccinated with an FDA-approved vaccine, thus limiting the accepted vaccines to those manufactured by Moderna, Pfizer-BioNTech and Johnson & Johnson. The AstraZenecavaccine, in use in much of Europe and Canada, would not have been allowed for entry at Broadway’s St. James Theatre.

But Jujamcyn Theaters, which owns the St. James, has announced that, “following amended New York State guidelines,” it would now welcome audience members who are fully vaccinated with either an FDA or WHO authorized vaccine. TheAstraZeneca vaccine has been approved by the World Health Organization.

Guests will need to be fully vaccinated with an FDA or WHO approved vaccine in order to attend SPRINGSTEEN ON BROADWAY and must show proof of vaccination at their time of entry into the theatre with their valid ticket. “Fully vaccinated” means the performance date you are attending must be:

– at least 14 days after your second dose of a FDA or WHO approved two dose COVID-19 vaccine, or

– at least 14 days after your single dose of a FDA or WHO approved single dose COVID-19 vaccine.

The only exception, the policy states, will be for children under the age of 16, or those who need reasonable accommodations due to a disability or sincerely held religious beliefs.

Springsteen on Broadway begins performances at the St. James Theatre on Saturday June 26 and runs through September 4.

In a tweet, Van Zandt wrote, “Many of you have asked. Here’s the answer. There were many complications to overcome. Regulations- national, state, city, theater, etc-changing constantly. Happy ending for the fans.”

Jujamcyn’s previous policy, established at the direction of New York State, drew outcries among Springsteen’s international fans as well as Canadians and Europeans alarmed at what the policy could portend for Broadway and New York City tourism in general. The news was greeted in Canada, for example, with The Toronto Star’s headline last Wednesday “Burn in the U.S.A.”

The response to Jujamcyn’s tweet ok’ing the AZ vaccine was better received. “This AZ girl thanks you,” responded one Springsteen fan, inserting a Canadian flag emoji just before the AZ.

SHORT TAKES — (from SHOWBIZ 411) The final weekend tally is in. “In the Heights” est morte. Not just here, but everywhere. The Jon M. Chu directed musical could not get past $20 million in its second week of release. It finished its 14 days at $19.6 million. If Warner Bros. keeps it in theaters over the summer “In the Heights” might get near $40 million, but it’s doubtful. Even worse, the international audience seems to have no interest in it. It made just $2 million this weekend in other countries, the biggest audience being the UK. And they may have come because of the “Hamilton” connection to Lin Manuel Miranda. In Mexico and Spain, where you think there might have been some enthusiasm, there was none.  It’s a headscratcher, but this thing went wrong fast. Even opening the Tribeca Film Festival didn’t help, maybe because Tribeca and Washington Heights are literally almost 200 blocks apart. The biggest blow was Lin-Manuel, who everyone loves, allowing himself to apologize for his own work. He killed the movie with that mea culpa. If he didn’t believe in his award winning popular musical, who should? If you bow to social media pressure, you will never hear the end of it, friends. I watched the first-hour this weekend and thought it was great. As Friedman said, there’s no hit song … and he’s right. Saturday Night Fever had “Stayin’ Alive” and “You Should Be Dancing.” Too bad, I really enjoyed it and always great to see Jimmy Smits …

I clicked on Apple TV’s Physical, with Rose Bryne and was just knocked out. She’s terrific and the script (and, source music) was even better. I watched the first three episodes and just loved it. She portrays a rather bored-LA wife, looking for the next big thing. More on this tour de force next time. The best thing I’ve seen since Ted Lasso and The Morning Show. Must-see for sure … Happy Bday To Michelle Toscas.

G. H. HARDINGJanuary 9, 2023
Read More
Scroll for more
Tap
Following Storm Large Now and Since 2015
In The Heights a Love Letter to Musical Theatre and to Life