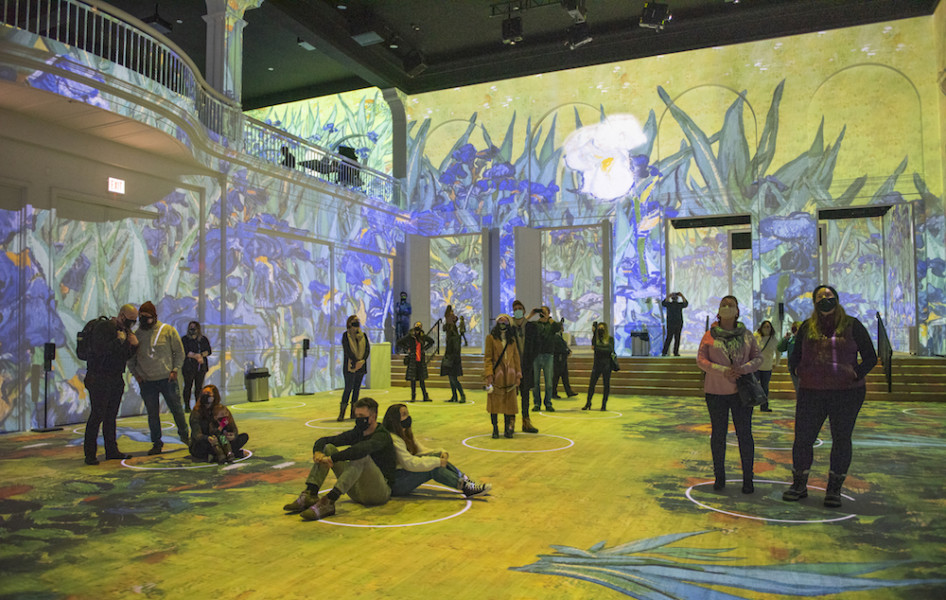 VAN GOGH; VAN NO — I went to NYC’s Van Gogh Immersive yesterday afternoon. I had read all the reviews and heard the very heavy PR-campaign, yet still didn’t really know what to expect. I was never what you might call a Van Gogh-aficionado (Basquiat and Warhol are more my speed), yet I felt that was an opportunity to learn more about the artist.

After a quick subway ride and walk, we approached the entrance which was mobbed. Once inside -and, with masks on- we were ushered to one of four massive warehouse units and instructed to sit on the floor, where the program would commence. With terrific music, Van Gogh’s most impressive works were shown in a marvelous 360-degree manner. To say there wasn’t a bad seat in the house would be an understatement. The ambient music immediately put me into a tranquil mood.

Having never seen much of the artists’ work, the images were terrifically impressive.

After an hour’s worth, the show was over and the exits were in sight, but not before you passed through a huge merchandise center, where you could purchase everything from a Van Gogh hoodie to a Van Gogh key-chain. Honestly, it was a bit much to bear.

Believe me, I know how these massive touring-shows work; they go from city-to-city with an intensive media campaign and you go thinking you’re going to see the best show ever. I’m not saying this wasn’t grand, but the Bowie-show I traveled to Toronto see several years back, had much more lasting power and context.

I would have preferred to have read -or seen- more about the artists life.

HARRISON’S COSMIC EMPIRE — George Harrison cut “Cosmic Empire” on May 27, 1970, the second day of his sessions for the album with co-producer Phil Spector. The deluxe update to All Things Must Pass is executive produced by Harrison’s son Dhani, with varying editions including a book, a Blu-Ray disc, and a wooden crate. The reissue is out August 6.

I’m a big Harrison-fan; loved All Things Must Pass; the Traveling Wilburys and his work with Jeff Lynne. This track, which features Harrison-singing in a falsetto, is cute … and, was left off the album, for maybe being too cute.

It features George’s patented lyrics and it’s definitely up there with “This Song” and Crackerbox Palace.”

BRANSON HAS LANDED — (Via Deadline) The billionaire has landed. “It was the complete experience of a lifetime,” said a beaming Richard Branson of his trek into space, a place where no billionaire has gone before. “Now looking down at the spaceport, congratulations to everybody for creating such a beautiful plane and all the hard work for getting us this far.”

Branson’s rocket was released at an altitude of 53 miles — further than the 50-mile boundary considered by the US to be the boundary of space. The crew then had a few minutes of weightlessness before returning to earth.

The crew was cheered by a crowd on the tarmac as the plane landed. Branson, who served as a mission specialist, jogged down the tarmac for a reunion with his wife, children and grandchildren.

The flight made Branson the first owner of a private space company to take his own spacecraft Origin flight plans by several days, as the Bezos launch is set for July 20.

Bezos’s team, however, claims that its flight will reach the true edge of space, going up 62 miles to Branson’s planned 55.

Branson will be joined by two company pilots and three Virgin Galactic crewmates. They will take wing from Spaceport America, a hub near Truth or Consequences, New Mexico.

VirginGalactic.com will be posting a livestream that morning, hosted by late night host Stephen Colbert. Grammy-nominated singer Khalid will also be debuting a new song at the landing site after Branson’s anticipated return.

Instead of a ground launch, the Virgin Galactic VSS Unity will be carried by a twin-fuselage carrier jet, then released at 45,000 feet for its journey via rocket power.

Virgin Galactic was founded in 2004 and already has a waiting list of so-called “space tourists” eager to take their own flight.

I first met Sir Richard many years ago at a launch for some new product of his. Everyone was attired in Virgin t-shirts and I recall leaving with an arsenal of Virgin-products. I must admit looking back on it now, I was suitably impressed by the quite orderly and detailed the procession of events went off. As one who has produced many a event, I can tell you first-hand that a tightly-wound agenda is a necessity.

Honestly, Branson has always seemed to me to be missing a screw or two, but he has made his dreams reality. Don’t forget, Branson started his whole professional life as the owner of a record store, Virgin Records, in London. The airlines, space program, superstores, and God knows what else, were all his dreams.

Guys like Branson, Jeff Bezos, Mark Zuckerberg and Elon Musk, don’t live in the same world as we do. Their expectations, their needs, are far different than ours. Even the trash-talk between Branson and Bezos was amusing, but that’s how these guys think and work.

In this dreadful year and last, Branson could well have found his own COVID-cure, but he continued on with his dreams.

One non-excited Ralph posted:  So the billionaire “B” boys are bragging over the LENGTH of their…space trips. Gosh, this would be comical if it weren’t so monumentally stupid. Aren’t we dealing with a worldwide pandemic? This is what the richest MEN in the world are doing – playing Luke Skywalker while the world burns. (Yeah, bit ‘o hyperbole there.)

SHORT TAKES — Looks like Wednesday will be my first concert, post pandemic: Chicago at NYC’s Beacon Theater. Details to follow … This week Romeo Delight will be booked at My Father’s Place in Long Island. Stay tuned for additional details … Check out the new single (“Dance Again”) from ex-Village People member Felipe Rose: