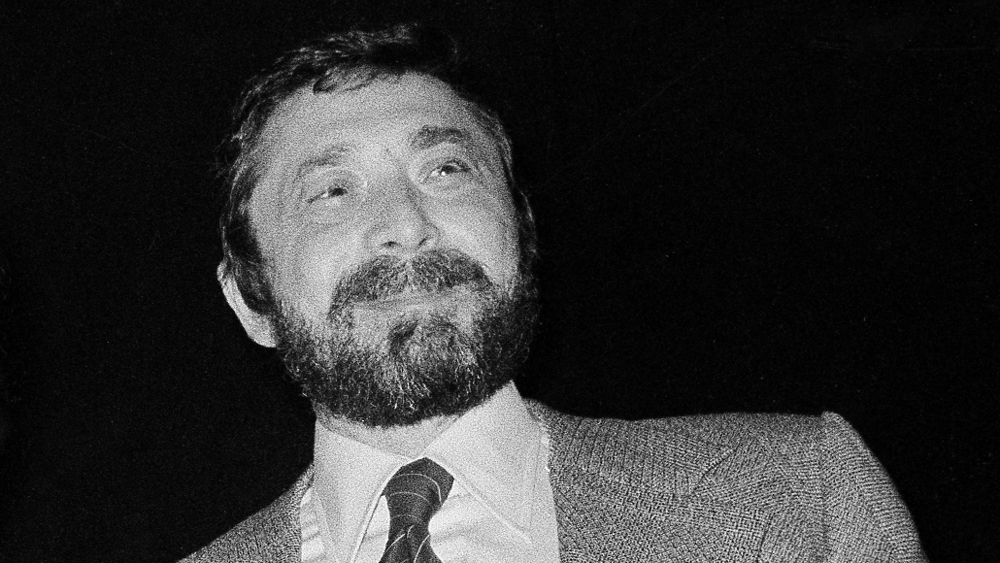 WALTER DONE — (Via Variety) Walter Yetnikoff, a colorful record label executive who led CBS Records as president/CEO from 1975 to 1990 — when its roster was stacked with superstars like Michael Jackson, Bruce Springsteen, Billy Joel, Barbra Streisand, Paul McCartney and the Rolling Stones — died Sunday night at age 87.  He would have turned 88 on August 11.

A cause of death has not been given, although he had been battling several illnesses in recent years. His wife, Lynda, confirmed the death to friends Monday.

Born in 1933 in Brooklyn’s largely Jewish Brownsville neighborhood, Yetnikoff described his childhood as “extremely painful” as a result of having been physically abused by his father. “He would kick me in the street when I was five,” recalled Yetnikoff in the New York Times. “And I thought that was normal. It’s not normal to bang your kid’s head against the wall, though.” His mother “worshipped money… [but] power was more my thing.”

The man who went by the Yiddish nickname Velvel attended Brooklyn Technical High School and Brooklyn College, then graduated from Columbia Law School, where he was an editor of the Columbia Law Review. After graduation, he served in the U.S. Army in what was then West Germany from 1956 to 1958, at the height of the Cold War. Upon his discharge, Yetnikoff was hired by the law firm Rosenman, Colin, Kaye, Petschek and Freund, which represented both CBS and its longtime chief, William S. Paley.

Yetnikoff joined CBS Records in 1961 as an in-house attorney, following in the footsteps of fellow lawyer and friend Clive Davis, serving as general counsel of CBS Records’ legal department. He was instrumental, together with Harvey Schein, in forming CBS/Sony, a Japanese joint venture which became highly profitable under Akio Morita and Norio Ohga and helped to plant the seeds for Sony’s eventual acquisition of CBS in 1988. Yetnikoff was then named CBS Records International President, a post he occupied from 1971 to 1975, growing the company’s overseas operations substantially. In 1975, Paley named him president/CEO of CBS Records following the dismissal of Clive Davis in 1972, who was replaced initially by former head Goddard Lieberson, then Yetnikoff.

Under the boisterous, controversial Yetnikoff, CBS Records set its sights on its rivals, especially the west coast-based Warner Bros. Records, managing to spirit away James Taylor and Paul McCartney from Warner and Capitol/EMI, respectively (Warner chief Mo Ostin retaliated by taking Paul Simon from CBS). Under Yetnikoff, McCartney collaborated with Stevie Wonder on the 1982 hit “Ebony and Ivory,” from Macca’s “Tug of War” album, and with Michael Jackson on “The Girl Is Mine,” from “Thriller.” McCartney and Jackson followed that up with another smash duet, “Say Say Say.”

To get a sense of how powerful a figure Yetnikoff was in the record business, his 50th birthday party in 1983 drew a who’s-who of celebrities, including Mick Jagger, Billy Joel, Christie Brinkley and Ahmet Ertegun. “People sometimes don’t return my calls,” he said about his years as a star maker. “In the old days, you were running a huge risk if you didn’t.”

Yetnikoff ruled the roost with an iron-clad hand and made many, many enemies along the way. His surprise tutelage of Tommy Mottola only made matters murkier when Mottola tuned on him years later and actually forced him to leave. Sides were drawn and remain. In those halcyon days of the record biz, figures like Davis, Ertegun and Ostin made as many headlines as their top acts.

I bet if you asked today who runs BMG, you wouldn’t get any answer. Today, it’s the acts. Back then, it was the mavens of the labels. Anyone recall Morris Levy?

WHITLOCK’S RAP — (via Best Classic Bands) Dozens of musicians famously performed on George Harrison’s 1970 masterpiece, All Things Must Pass. But studio credits have been murky, not only on the original release but in various anniversary reissues. Perhaps no musician is more vocal than Bobby Whitlock, the keyboardist with Derek & the Dominos, the Eric Clapton-led band that performs on the album. In a 12-minute video interview titled The Truth About All Things Must Pass, uploaded to his YouTube channel on August 6, the performer makes his case to set the record straight about credit oversights on the album that’s been expanded for its 50th anniversary.

The video interview was released on the same day the new editions arrived with a wealth of previously unreleased material.

Keyboardist Gary Wright, well known for his 1975 hit “Dream Weaver,” is a frequent target of Whitlock’s ire. “I can tell you right now… Gary Wright isn’t playing the B3 on ‘Let it Down.’ It’s me. There ain’t no two ways’ about it.” He’s referring to the Hammond B3 organ, an instrument for which he’s well known.

While holding a copy of the album cover and perusing the credits, Whitlock rattles off many of the opus’ familiar song titles. “‘What is Life,’ ‘If Not For You,’ ‘Run of the Mill’… I’m playing on all of these,” he says. “‘All Things Must Pass,’” he continues, referring to the title track, “that’s me and Eric [Clapton] singing background.”

Whitlock indicates that he also performed on a pump organ noting, in particular, that he did so on the album’s #1 single, “My Sweet Lord.” “All the pump organ on the album… I’m playing. All the Hammond organ, I’m playing. So anytime you hear a Hammond… Billy Preston is playing a grand piano. That’s how it really went.”

He doesn’t let up on the Gary Wright credits. “If Gary Wright had played organ on ‘Let it Down,’ I’d be saying, ‘That’s Gary Wright playing.’ He hasn’t seen a day he can get an organ to sound like that. There’s only one person I know who can make a Hammond B3 sound like I make it sound and that’s me.”

“If I had only done hand-claps or sang a background part on this great album, that would have carried me for the rest of my life. But, fortunately, I played on pretty much and sang on everything. On ‘My Sweet Lord,’ that’s just George and me singing background.”

The off-camera voice who is asking the questions, is presumably Whitlock’s wife, CoCo Carmel. She occasionally eggs him out.

At one point, Whitlock praises Wright. “He’s a lovely person. He’s a sweet man. But he can’t play Hammond B3 like me. Behind Gary Wright and Gary Brooker,” he says, referring to the Procol Harum founder, lead singer and pianist, “they played piano and synthesizers.” (mimics a synth)

Later, Carmel refers to the album’s core band. “That man,” says Whitlock, pointing to Harrison on the album’s iconic cover, “called Eric Clapton, and asked me and Eric to put together the core band and to be the core band for the album.”

As for the album’s proper studio credits, Whitlock says, “Olivia Harrison and Dhani Harrison [referring to George’s wife and son]… they weren’t around. Nobody called me. Nobody called Eric about this new stuff that’s coming out.”

Now, I don’t know Bobby, although I’ve seen him perform and he’s terrific, but what’s bought on this sudden rash of ill-fated angst. Was he really that bummed that he wasn’t contacted about the re-issue (or, paid)? Could be, but to keep referencing Gary Wright is certainly not the right way to behave. It’s kind of shameless … right? Bad karma for sure Bobby. If George were here, I know exactly what he’d tell you to do.

SHORT TAKES — Band of Gold, from Freda Payne and Mark Bego, is out 10/19 on Yorkshire Publishing … Writer Rush Evans delivers one of the best articles on Micky Dolenz and his current album Dolenz Sings Nesmith I’ve read yet. Just brilliant. Check it out here: https://www.goldminemag.com/interviews/dolenz-sings-nesmith-and-talks-monkees-legacy?fbclid=IwAR3BQEj4kbmxnI_NlkwBqvPchD_BtFu4pbP629hAUPPeR2RyfWodsYlDWjY … As of this writing all go for Robert Miller and his Project Grand Slam benefit concert for Shakespeare & Company next Tuesday, 7/15, at The Tina Packer Playhouse in Lenox, MA … The yearly New Orleans Jazz and Blues Fest has been canceled for this year. Sad. Great event, but poised to return next year …

It only took me 8 years, but I finally started viewing Amazon’s Bosch, with Titus Welliver and its just sensational. Welliver, from Lost, brings a gritty, realistic edge to the character. I didn’t realize that the character is based on a Michael Connelly book (The Burning Room). It’s really just a police procedural, but done just so perfectly. Welliver’s has a swagger that’s hard to resist. The great Lance Reddick from Fringe, is onboard too and just sensational. Eight seasons … I’m on season 2 …

Steve Zahn and Jennifer Coolidge are just so good in this show, which unloads its season finale next week. It’s not really must-see-TV yet, but it was much better than their Undoing. btw: it was just renewed for a second season with a new cast and new location. I’m still waiting for Succession with the great Brian Cox to return … Netflix’s Stranger Things won’t return till 2022 … As we were penning this Governor Andrew Cuomo formally resigned – in two weeks. Am I surprised? No way. Absolute power absolutely always corrupts. It was just a matter of time … HAPPY BDAY TO EBET ROBERTS!