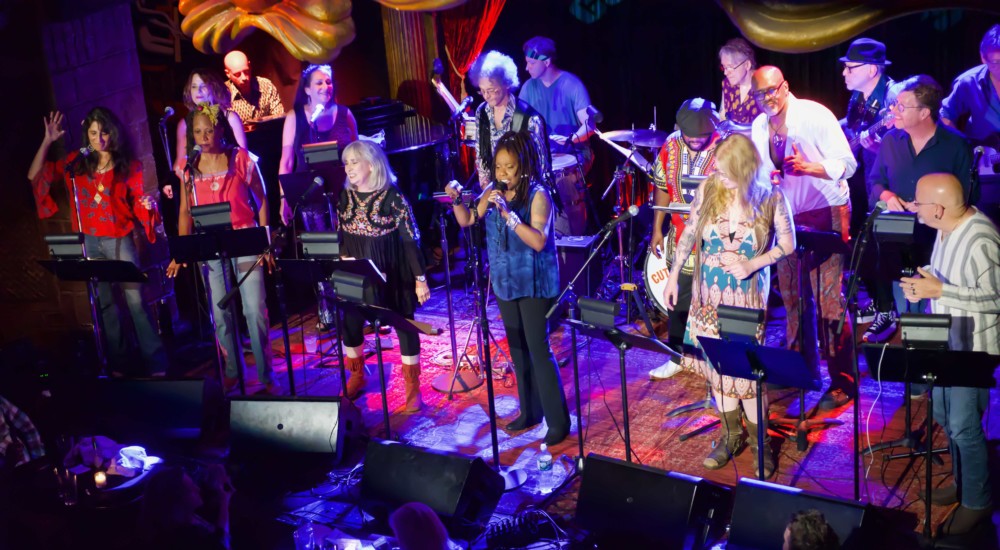 Hair at The Cutting Room (photo by Jeff Smith)

HAIR AGAIN AT THE CUTTING ROOM — Hair: The American Tribal Love-Rock Musical is a rock musical with a book and lyrics by Gerome Ragni and James Rado and music by Galt MacDermot. The work reflects the creators’ observations of the hippie counterculture and sexual revolution of the late 1960’s, and several of its songs became anthems of the anti-Vietnam War peace movement. The musical’s profanity, its depiction of the use of illegal drugs, its treatment of sexuality, its irreverence for the American flag, and its nude scene caused much comment and controversy. The musical broke new ground in musical theater by defining the genre of “rock musical”, using a racially integrated cast, and inviting the audience onstage for a “Be-In” finale.

Hair tells the story of the “tribe”, a group of politically active, long-haired hippies of the “Age of Aquarius” living a bohemian life in New York City and fighting against conscription into the Vietnam War. Claude, his good friend Berger, their roommate Sheila and their friends struggle to balance their young lives, loves, and the sexual revolution with their rebellion against the war and their conservative parents and society. Ultimately, Claude must decide whether to resist the draft as his friends have done, or to succumb to the pressures of his parents (and conservative America) to serve in Vietnam, compromising his pacifist principles and risking his life.

After an off-Broadway debut on October 17, 1967, at Joseph Papp’s Public Theater and a subsequent run at the Cheetah nightclub from December 1967 through January 1968, the show opened on Broadway in April 1968 and ran for 1,750 performances. Simultaneous productions in cities across the United States and Europe followed shortly thereafter, including a successful London production that ran for 1,997 performances. Since then, numerous productions have been staged around the world, spawning dozens of recordings of the musical, including the 3 million-selling original Broadway cast recording. Some of the songs from its score became Top 10 hits, and a feature film adaptation was released in 1979.

A Broadway revival opened in 2009, earning strong reviews and winning the Tony Award and Drama Desk Award for Best Revival of a Musical. In 2008, Time wrote, “Today Hair seems, if anything, more daring than ever.”

A few addendum to the above notes: The Fifth Dimension had a hit with “The Age of Aquarius”; as did Oliver with “Good Morning Sunshine” and Three Dog Night with “Easy To Be Hard.”; the movie-adaption (1979) had Treat William starring as Berger (with a left-on-the-cutting room floor cameo by celeb author Mark Bego; John Savage and Beverly D’Aneglo and the revival in 2009 was pretty good.

Last week, at Steve Walter’s Cutting Room, there was a musical revival onstage under the tutelage of Mike Visceglia (and a crackerjack band) and it was simply terrific re-living those glory days. “Easy To Be Hard” was just outstanding; reminding this writer that they just don’t write them like that anymore and “The Age of Aquarius” which opened the show. “Good Morning Sunshine” was terrific as well.

Between the singers and band, there were as many as 24 people onstage and it looked great. Most were attired in 60’s-themed wear, as was the Room’s Walter. Just a phenomenal evening which was intro-d by Q1043’s Ken Dashow. Also seen were the China Club’s Danny Fried; PR-pasha David Salidor and photographer Jeff Smith.

Sure the SRO crowd was of a certain age; but it was great fun. I do hope there’s a repeat performance soon.

BTW: Congrats to Walter and the club for nabbing an excluisve appearance by Cindy Blackman-Santana for October 13. I’ve seen her work with Lenny Kravitz and it is sensational. I’ll be there for sure. BTW: both Walter and Santana attended Boston’s Berklee School of Music..

SHORT TAKES — What’s going on over at Jeopardy? It’s been nine months since the tragic passing of Alex Trebek and the show is now enduring its own sense of jeopardy for sure. Executive producer Mike Richards, who I never even heard of before Jeopardy, was poised to take over as permanent host of the show, when comments made on a podcast years ago surfaced; defaming women; Jewish people and short people. Almost immediately he was jettisoned from the host position, but interestingly it was reported he will remain as producer of the show. But, believe me folks, that will never stick …

Robert Miller and his Project Grand Slam ensemble headlined a benefit last week in Lenox, Massachusetts (at The Tina Packer Playhouse) for Shakespeare & Company. According to Miller, “I adore the Berkshires, and as a longtime resident I’ve always wanted to have the band play a major concert in the area,” said Miller. “This benefit concert is a great event in a terrific setting for a wonderful cause” …

Just a sensational and accurate piece on the Vanity Fair web this week on The Monkees; who begin their tour September 10 in Spokane, Washington. Check it out here: https://www.vanityfair.com/style/2021/08/the-most-influential-pop-rock-band-ever-the-monkees …

Boy, has there ever been a more mysterious persona than Sean Penn? Speed The Plow; Madonna; Mystic River; Fast Times at Ridgemont High; Haiti … he’s literally been a whirlwind of mixed messages. Sunday’s interview with NBC’s Willie Geist  (at Gallagher’s no less) was pretty good, though they didn’t touch on Madonna or his Broadway work, Fast Times or his recent marriage to Vincent D’Onofrio’s daughter. His new movie, which has gotten pretty mixed reviews Flag Day (which stars his daughter Dylan) is out now … Happy Bday Lora Evans; Van Dean; and David Salidor and RIP Don Everly and Chuck Close!