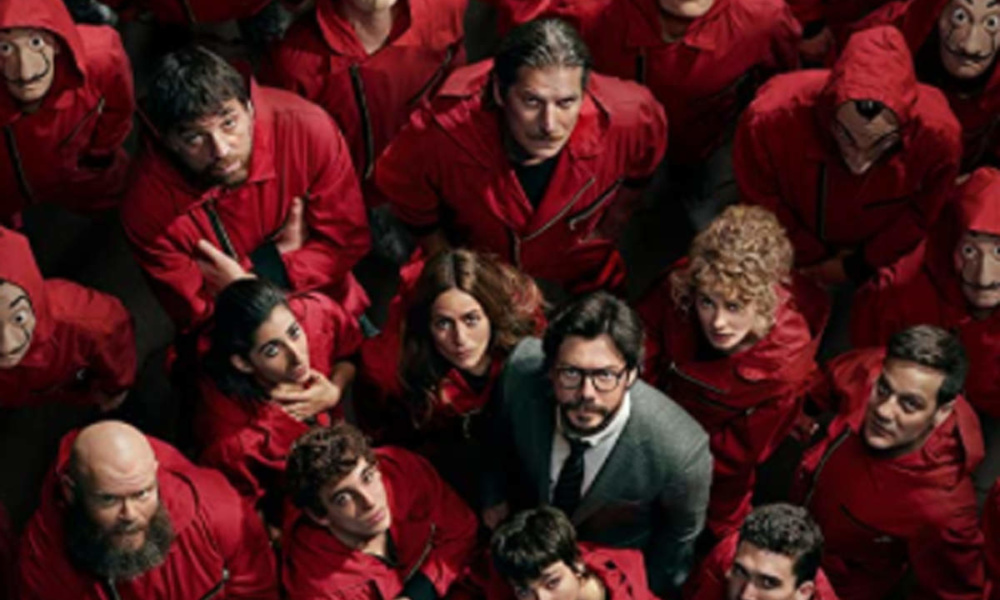 MONEY HEIST — I think pretty much everyone will agree that while sitting at home during the pandemic, Netflix’s Money Heist was one of the most desirable shows to view.

From Spain, it had just downright awful dubbing, but the characters, the visuals, the acting, and the witting was just miraculous. It immediately drew you in and literally you couldn’t stop watching.

I was blown away by all four seasons which I viewed literally in a few days.

The show’s creator Alex Pina has a splendid flair for visuals and fire – which I literally saw in ever other scene.  The writing was just sensational; with flashbacks into each of the characters, who adopted a name of a country: Nairobi; Tokyo; Berlin; Denver; Rio; etc.

Without giving too much away, for those who foolishly didn’t watch this; it’s the story of a band of outlaws who combine their forces, led by the mysterious Professor, into a museum heist which turns into a hostage situation and then a battle of wits between the good and bad.

After a serious hiatus caused by the pandemic, their fifth and final season returned last Friday – split into two mini-seasons, and the first five were just riveting.

Money Heist is as good as Lupin!

ROCKETEER RETURN — Disney is reviving a cult classic favorite, The Rocketeer, with a new Disney+ movie titled The Return of the Rocketeer. David and Jessica Oyelowo are producing under their Yoruba Saxon banner.

The project, written by Ed Ricourt, will also be a possible starring project for the Selma actor. The original movie, released in 1991, was directed by Joe Johnston and adapted from Dave Stevens’ graphic novel. In that film, which made close to $47 million at the domestic box office and became a fan fave for the studio, a young pilot stumbles onto a prototype jetpack that allows him to become a high-flying masked hero.

The Return of the Rocketeer will have an all-new creative directive, with Ricourt’s story focusing on a retired Tuskegee airman who takes up the Rocketeer mantle.

Ricourt wrote Lionsgate’s hit feature Now You See Me which grossed more than $351M worldwide and spawned a sequel that made close to $335M globally. He’s written for Marvel/Netflix’s Jessica Jones on which he was also a consulting producer; Wayward Pines; and produced and wrote the Netflix series Raising Dion.

The original 1991 movie, which starred Billy Campbell; Jennifer Connolly and Alan Arkin, was a great romp. Terrific effects considering the year. Maybe Joe Johnston should direct the new one? btw: Whatever happened to Billy Campbell? He was spot-on great!

SHORT TAKES – NYC’s Fashion Week began Tuesday. Some shows will be virtual; others will be live.

Stay tuned … That Band of Gold book, by Freda Payne & Mark Bego, is out November 2 via Yorkshire Publishing …

If you are like me, and missing Mary Wilson, check out this great new remix of her disco hit from 1979 – “Red Hot.”  It is been given a fresh new lease on life, and can be found on YouTube.  I remember dancing to the original version at Studio 54.  Check out this link. The artistry of Mary lives on!

– https://www.youtube.com/watch?v=JdwF5LJyIn0 … And, writer/director Michael Domino’s has had his film Mott Haven (with Robert Davi) accepted for the forthcoming Mott Haven FilmFestival. Details to follow.