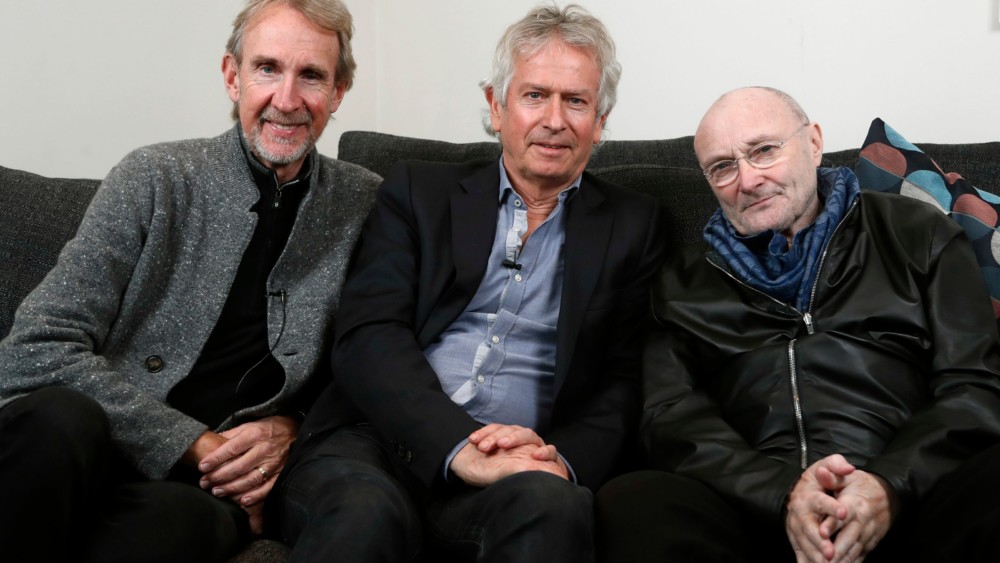 MY GENESIS — In the late-70’s I was working for a PR-firm and one of my clients was Hit & Run Music, who were the publishing concern for prog-rock geniuses Genesis.

Peter Gabriel had just left the band and they were out performing a series of shows with their new lead vocalist, their drummer Phil Collins.

These show were part of the albums Then There Were Three and the still brilliant live-album Second Out.

I spent at least a month out on the road with them; watching their simply unbelievable show and watching just an amazing light show. every night Did you know that Genesis were among the first to use Vari Lites, that have now become an industry standard. Look them up!

I got to know them all fairly well and Collins in particular; an avuncular, funny, funny guy. All of them, Mike Rutherford and Tony Banks included, would be up for literally anything. Sure, Gabriel’s departure hurt, but they soldiered on in the best way possible. Truth be told, Collins sang so much like Gabriel it was a bit uncanny. The audiences and shows were just amazing in every way.

Interestingly enough, I got to know Collins and the band all over again several years later, when I was involved with director Jim Yukich’s FYI company, who did pretty much all of the Genesis videos and even some Collins-solo ones. I actually loved the one Jim did with Philip Bailey and Collins, “Easy Lover.” Yukich is just a brilliant director from concept to execution,. If I needed a video guy, he’d be my one-and-only choice. He also did all the early-Debbie Gibson ones that you can’t forget.

Which brings me to the fact that this past week, the three-man Genesis began their so-called Last Domino tour,. As you can see from the video here:

Their light show was as amazing as ever, but Collins, now sidelined by several back issues, is in a chair and clearly his vocals are not what they used to be. It’s just plain sad.

In an interview right before the tour started, Collins admitted he could barely even hold a drumstick; which as you can imagine was either a brilliant PR-move to sell every last ticket, or a sad side-note to the tour. The media was set on fire with this comment.

The music, however, sounded as fresh and brilliant as ever; with Collins son Nic on drums. Watching him was inspiring; as he surely must have taken lessons from the old man, but you know what they say, it’s in the genes.

They’re coming our way next month and the shows should be just terrific. In fact, I’m quite sure the reception they received will boost Collins confidence. He looks terrible frail and watching him sitting is just plain awful.

Genesis is a great band-I’ve loved them since their “Watcher Of The Skies” and we’ll definitely miss them. Catch them is you can. Musical history for sure.

THE ORVILLE IS BACK … AT LAST — The Orville is, at long last, (almost) ready for its next mission — on Hulu.

The streamer has announced that Season 3 of the space adventure series, which is now titled The Orville: New Horizons, will premiere on Thursday, March 10, in the year 2022 — nearly three years after its sophomore finale aired on Fox.

Among the new additions for Season 3 (besides Hulu, that is) are 13 Reasons Why‘s Anne Winters (as a character named Charly Burke) and guest star Eliza Taylor (The 100) as a character TBA.

Although The Orville‘s first two seasons aired on Fox, it was announced in July 2019 that MacFarlane’s sci-fi series would move to Hulu for Season 3 — and that those new episodes would not arrive until “late 2020.” (“As the show has evolved and become more ambitious production-wise, I determined that I would not be able to deliver episodes until 2020, which would be challenging for [Fox],” MacFarlane explained at the time. “So we began to discuss how best to support the third season in a way that worked for the show,” by offering it up to Hulu.)

“All I can say is we’re working on it. We’re working very hard,” MacFarlane shared in September 2020 during an Instagram Q&A with Szohr, who plays Xelayan officer Talla Keyali.  “For a show with a lot of prosthetic makeup that requires close contact, a lot of background artists… you want to make sure you do it in a way that keeps everyone safe and secure,” McFarlane explained. “Once we have those protocols figured out, we will start up again and you will get more Orville.”

I never cared for MacFarlane’s shtick, but I started watching this show and it was just sensational. Sort of a not-so-serious Star Trek. MacFrarane was just hilarious and the special-effects were pretty compelling too. I loved it. Then, MacFarlane said something about Fox and The Orville was gone … banished from the network.

Thankfully, it has surfaced on Hulu after a too-long delay. I hope it’s as good.

SHORT TAKES — I came across American Gangster on TV and couldn’t pull myself away. Denzel Washington and Russell Crowe were just amazing in this 2007 Ridley Scott-movie. Josh Brolin and Robert Funaro as crooked cops were pretty stellar too. A classic … The last episode l Hulu’s Nine Perfect Strangers aired and was a perfect conclusion. Suffice to say that each of the characters after some sturm and drang, got exactly what they wanted. The series wasn’t for everyone, but we loved it. Michael Shannon, Bobby Cannavale and Melissa McCarthy all delivered Emmy-worthy performances. Bravo! …

We watched the second episode of Apple’s The Morning Show (their second season) titled It’s Like The Flu and it definitely captured more of the feel of their stellar first season. More momentum, more action for sure. It caught up with all the characters, including Mitch (Matt Lauer) Kessler who’s in exile in Lake Como, Italy. Actually, it seems like Mitch may have gotten the best deal of all. Bill Crudup continues to shine. The time-line is a year-behind where we are right now and they deftly touched on the burgeoning Covid-virus. Nicely done …

Another new Tom Hanks movie? Finch. We loved News of the World. Check out the trailer:

G. H. HARDINGJune 10, 2022
Read More
Scroll for more
Tap
Grammy Award Winner Catherine Russell Is Like A Glass of Sparkling Wine Effervescent
A Thrilling Tony Awards Where The Best Play Is The Inheritance