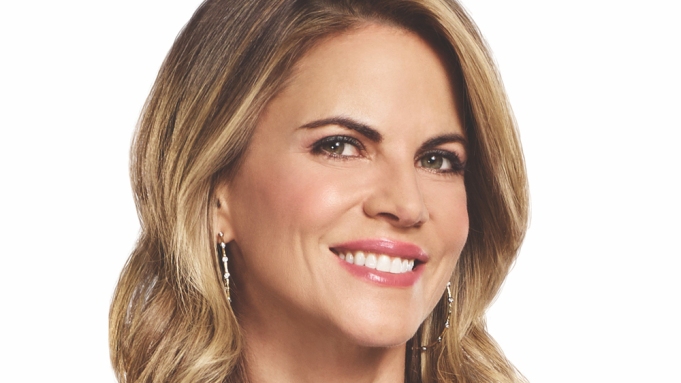 HERE’S NATALIE — (Via Deadline) It’s official. Natalie Morales is joining The Talk as permanent co-host. The news, which had been reported by Deadline and other media outlets Friday, was announced live today on the CBS show.

“We couldn’t be more excited to have Natalie Morales join The Talk family,” said executive producers Heather Gray and Kristin Matthews. “We have been fans of her and her work for years. Her varied skillset and versatility are a great addition to our talented panel. Natalie’s intelligence, passion and enthusiasm always shine through in all her work, and we are fortunate to have her on the team. In addition to her role as an exceptional broadcaster, we believe her perspective as a wife and mother will provide a special connection with our audience.”

“It’s an extraordinary opportunity to be joining this team at The Talk,” said Morales. “I love the new energy and direction and couldn’t be more excited to join Sheryl, Amanda, Jerry and Akbar. I’m looking forward to many good times while talking about the days’ topics, and I can’t wait to get going.”

Gbajabiamila joined the panel last month, following the exits of Carrie Ann Inaba, Elaine Welteroth and Sharon Osbourne, who had been fired in March after sparking a media firestorm over comments she had made on air.

Inaba and Welteroth exited the show in August.

The Talk returned September 13 for its 12th season.

Morales announced Friday she was leaving NBC News after 22 years for an unspecified new opportunity.

Most recently, Morales was the West Coast anchor of NBC News’ Today, correspondent for Dateline NBC, and anchor of Behind Closed Doors with Natalie Morales. She previously served as host of Access and co-host of Access Live, as well as news anchor of Today, where she co-hosted the show’s third hour. Morales joined Today in 2006 as a national correspondent and went on to appear on other NBC News programs including NBC Nightly News and Dateline. She will continue to appear on Dateline through the end of the year.

Morales is just terrific. I especially loved her on NBC’s The Today Show; where a rumored dalliance with Matt Lauer was brought up for decades. When Lauer was fired, and Morales was asked about it, she politely declined to answer. When she surfaced on Access and Access Live, I thought she was a perfect fit; but then both shows substantially cut back on their budgets, which precipitated Morales leaving. But, 22 years at NBC just has to be a record!

When she was East Coast bound, she lived in Hoboken and often reported on events there.

With the roles changing almost weekly on The Talk, I wish for her only success and a long run there.

LA BREA –— We watched NBC’s La Brea which debuted last week and kind of liked it. Imagine this: The infamous La Brea tar-pits in LA implode and dozens of people fall through … to a fairy-tale like land on the other side. Plausible? Not really, but you never know.

In the undiscovered country, they meet all sorts of individuals and initially, to me at least, it seemed liker Lost; where every character had a different sturm and drang. The effects were pretty good and Natalie Zea and Jon Seda lead the cast and they’re particularly formidable.

Zea has just separated from her husband and their daughter Izzy (Zyra Gorecki) has a prosthetic leg. Gorecki, by the way, is sensational; literally stealing every scene she’s in.

The writing, by David Applebaum, is interesting for sure. Compelling too. NBC’s Debris, which came and went last year, was a tad more cerebral. Sci-fi shows rarely work on network TV … this one just could.

SHORT TAKES — New Kids On The Block have announced a renewed Mix Tape Tour to begin in June of 2022 which features all new participants, including Rick Astley, En Vogue and Salt ‘n Pepa (who were on last year’s outing). Wonder why there’s no Debbie Gibson or Tiffany this time around. Stay tuned for more intel on this … New Adele single “Easy On Me” is out next week. The first new music from the songstress since 2015. Wonder if her new album will be titled 30? She’s actually 33, but 30 has a nice ring to it … I attended a wedding in Boston over the weekend and the band there, performed The Killers’ “Mr. Brightside.” And, very impressively so. Bravo! … Celeb-writer Mark Bego will be crafting a special ‘Band of Gold’ cocktail for his event, with Freda Payne, at Steve Walter’s Cutting Room on Monday, November 1. The event is for the launch of their Yorkshire Publishing book, Band of Gold … Speaking of Payne, she guests this Saturday on Cousin Brucie’s WABC radio hour (https://wabcradio.com/show/cousin-brucies-saturday-night-rock-n-roll-party/) and will serve as a guest DJ on SiriusXM’s 70’s show … I haven’t yet watched David Chase’s The Many Saints of Newark, but, boy, is it ever getting raked over the coals. I’m watching it this weekend …

So, the last moments of last week’s The Morning Show on Apple, had Reese Witherspoon’s character (Bradley Jackson) lean over to Julianna Margulies and give her a big wet one. It was surprising to say the least. Somehow after only 3 episodes, this show’s second season is surprisingly sluggish; and, I don’t know why, though this scene was a bit of a shocker … Also, tonight at The Cutting Room, Cindy Blackman aka Mrs. Carlos Santana. Can’t wait for this one; Cindy does know her away around a drum-kit … Two other Boston hot-spots to mention: Kane’s Donuts and the South Street Diner. Both exquisite …

We just watched the Season Two premiere of ABC’s Big Sky and just loved it. As quirky as ever, and at the end, there front-and-center was Big Ed Lagarski’s twin brother as telegraphed late in the first season, The brother, with a long ponytail, frolicked along to the music of the Turtles’ “Happy Together,” opened a door, and there was bad-boy Ronald. Chained to the wall. More to come for sure. John Carroll Lynch is as good as ever.

Welcome back! … Micky Dolenz, on tour, visited Graceland last week in conjunction with his performance at the Soundstage at Graceland in Memphis … RIP Alan Kalter.