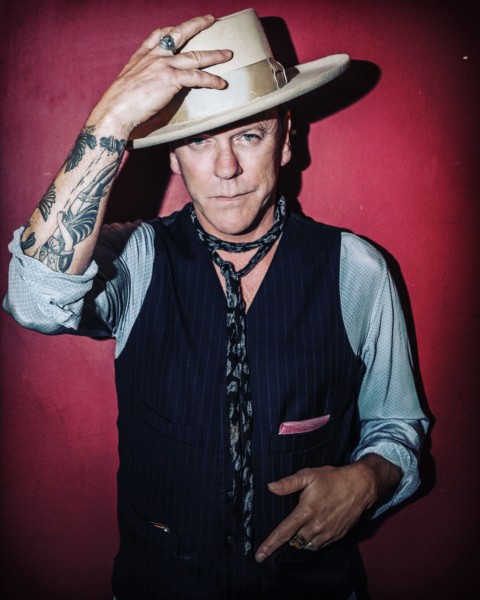 SUTHERLAND RETURNS — After announcing details of his upcoming third album Bloor Street as well as an extensive UK and European tour, Kiefer Sutherland shares the album’s new single. The Bloor Street album will be released on January 21 via a new deal with Cooking Vinyl.

The “Bloor Street” single provides a taste of what to expect from the album. A serene country-tinged rock ballad, “Bloor Street” finds Kiefer reflecting on his time growing up in Toronto, Canada, taking in the rush of the city alongside its biting winds and iconic skyline. The details are specific to the city, but the broader meaning is universal: wherever we grow up inevitably plays a part in shaping our future.

The single is released alongside an accompanying video. Directed by Tom Kirk at Hidden Road Studios, it extends the song’s poignant sense of nostalgia. Interspersed between cuts of Kiefer’s performance of the track are a montage of images of snapshots from Toronto’s history. That tender mood is enriched by personal photographs of Kiefer, dating all the way back to childhood.

Kiefer says, “They say you can never go home. This song, for me, says in your heart you never leave.”

I’m a huge Keifer-fan and really have been since the movie The Lost Boys – in 1990 – I loved original! I loved him in 24. It was a pretty terrific series, and yes, there are talks about bringing it back for a brief revival. I also loved the first Season of Designated Survivor; I didn’t even know  what a designated survivor was and he made the most of hthe role. Some of his music has been pretty outstanding and, this new single sounds great. Here’s the video

WILSON REDEUX —Singer, activist, author, fashion icon, actress, mother, grandmother, friend, trailblazer, legend, Supreme: Mary Wilson earned her place in music history.  She was the only original member of The Supremes in every incarnation of the groundbreaking group from beginning to end (1961 to 1977) but her story didn’t end when The Supremes did.

Now, the late superstar’s remarkable legacy of music is being collected for the very first time in a deluxe 2-CD set. Real Gone Music and Second Disc Records are proud to present Mary Wilson’s The Motown Anthology.

This comprehensive overview of Wilson’s Motown discography presents 38 songs, including a whopping 33 tracks only available physically on this collection. It boasts nearly two dozen Supremes classics, deep cuts, and never-before-heard songs (most in stunning new mixes) from a host of songwriters including Berry Gordy, Smokey Robinson, Holland-Dozier-Holland, Deke Richards, Barry Mann and Cynthia Weil, Thom Bell and Linda Creed, and others.

In addition to the worldwide CD debut of the 1979 Mary Wilson album, The Motown Anthology premieres on CD solo tracks produced by the late Gus Dudgeon, the first-time-available album version of Mary’s new single “Why Can’t We All Get Along,” and Eric Kupper’s remix of “Red Hot.”

The set has been produced by the team of Andrew Skurow, George Solomon, and Joe Marchese and mixed and mastered by Kevin Reeves.  Its 44-page booklet is stuffed with rare and previously unpublished color photos plus liner notes from Marchese, Skurow, and best-selling author Mark Bego.

We finally were gifted the new Debbie Gibson album, The Body Remembers, and while we loved the majority of it, it’s essentially a throwback to what she began with her tremendous (and, somewhat overlooked album) Anything Is Possible, including the masterful single “Losin’ Myself” in 1993; on which she worked with the brilliant Lamont Dozier.  She’s singing basically in the same throaty, disco-flavored style that began with “Girls Night Out” and the new single “One Step Closer.” Truth be told, I love the title track most of all. Lyrically, Gibson’s never been better. While there are more than several nods to rapping and contemporary accouterments; it’s a powerhouse of an album-her first in 20 years. Not any new ground, but solid-Gibson. It’s hard to define exactly where her audience is right now, but they’ll adore this. When she started out in 1986, dance-clubs were in vogue and I recall her doing five different ones some nights. Still, her “Lost In Your Eyes” and “Foolish Beat” have established her as a force to reckon with and working with the best of the remixers out then; including Tony Moran and M&M, she’s developed a large and loyal following. With this album; it’s Electric Youth-time  all over again… Freda Payne speaks to the Closer’s Katie Bruno next week and in L.A. just celebrated her Let There Be Love EP release with Johnny Mathis at the Catalina jazz haute-with her co-writer Mark Bego on-hand …  Harry & Me! authors David Roberts and Neil Watson speak to Atlanta’s INsite Magazine’s Lee Valentine Smith Tuesday for a major interview. The magnificently adorned book is officially out next week …

In the 1992 movie, Billy Crystal starred (and, directed) the movie Mr. Saturday Night as comedian Buddy Young, Jr., on the tail end of somewhat lackluster career. While the movie had many, laughable moments, to me, most heartfelt were when Crystal/Young realized his career had not been all good and he regretted what he didn’t take the time for. Most shuddering was the moment when Crystal confronted his agent after realizing he had no dates for the summer … and, said ‘there’s goes my summer.’ For anything in this business, this was a catastrophic blow. Now, Crystal is mounting a stage show. How will it play? The movie was not a hit; but, all these years later (and, with the success of Hacks) it may translate very well to the stage. Crystal’s a good guy. I remember sharing a coast-to-coast flight with him decades ago and he was delightful company. Crystal’s uncle owned and operated the legendary Commodore Records: Milt Gabler … On Saturday, November 27, USA Network brings us the much-anticipated Nash Bridges-revival, with Don Johnson and Cheech Marin. Some have said this is the revival no-one wanted, but, me, I can’t wait … Tears For Fears are readying their first album, The Tipping Point, in 17 years .. 40 years ago Lindsey Buckingham came out with his first solo album (Law and Order); and, it was a killer.

Now, comes another album called Lindsey Buckingham. Innovative and delightful, just like that first one. More on this next time  … Watched the CSI: Las Vegas re-boot and enjoyed it immensely. Billy Petersen’s entrance was literally in the last two minutes, but well worth it. He’s a great actor for sure. This re-boot will be interesting. And, yes, The Who’s “Who Are You” is still the theme song … Happy BDay Heather Moore!