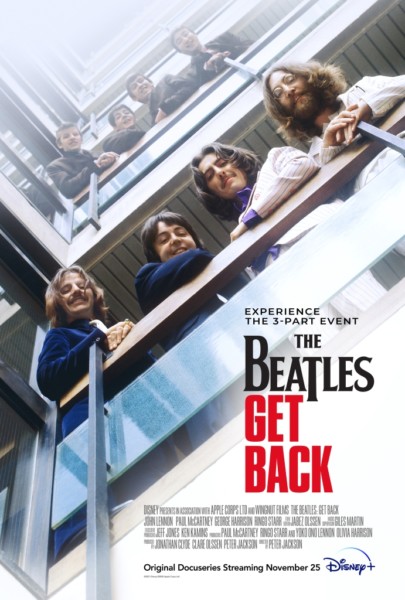 GET BACK JACK — (via Deadline) The first official trailer dropped Wednesday for Peter Jackson’s The Beatles: Get Back, which chronicles the band’s creative process as they attempt to write 14 new songs in preparation for their first live concert in over two years. It would also be the band’s final live performance.

While Jackson previously released a sneak peek at his upcoming six-hour Disney+ series, that footage was mostly a montage of moments, rather than a trailer or clip.

Today’s footage shows the Beatles at work on the new songs and imagining a concept for the concert, which became an iconic moment in music history. Faced with a nearly impossible deadline, there is disagreement and doubt among the band’s members as they compose some of the world’s most iconic songs.

“The best bit of us, always has been and always will be,” says Paul McCartney in the trailer, “is when we’re backs against the wall.”

The footage, which Disney says has never before been seen, is from a planned 1969 TV special and documentary that never came to be. The nearly 60 hours of unseen footage was shot over 21 days by Michael Lindsay-Hogg, who had previously directed The Rolling Stones Rock and Roll Circus. Jackson also had access to more than 150 hours of unheard audio.

“Jackson is the only person in 50 years to have been given access to this Beatles treasure trove,” said Disney in a statement, “all of which has now been brilliantly restored.”

The upcoming three-part series will be arriving on Disney+ “just in time for the Thanksgiving holiday,” rolling out over November 25, 26, and 27, 2021 exclusively on Disney+.

The docuseries features – for the first time in its entirety – The Beatles’ rooftop concert on London’s Savile Row, as well as other songs and classic compositions featured on the band’s final two albums, Abbey Road and Let It Be.

Now, we‘ve written about this before and voiced our strong objection to this bit of revisionist history. I mean, the trailer is great: but I must ask: If the lads were so happy and enthralled with each other … then why did they break up?

I saw only a brief shot of George Martin; Neil Aspinall doesn’t even look like he’s there and original director Lindsey-Hogg is in the briefest of flashes. Mal Evans actually is in a lot of it.

I saw the original movie in 1969 and it was sensational; it showed a band in crisis, but still making incredible music that’s lasted till now.

I know I’m in the minority here, but the way I am choosing to look at it, is like this: There’s a whole new audience out there for the group and their music and there’s absolutely no reason they shouldn’t discover it and enjoy as I have.

NCIS ADIEU — I don’t know how we got the episode title screwed up earlier in the week, but Monday night’s episode -yes, the one where Gibbs said adios- was titled Great Wide Open.

It was a bittersweet one as viewers one by one, knew early on what was happening.

There was a goodbye scene with 88-year-old David McCallum and one with Rocky Carroll, so good as Vance.

Bittersweet is really the only way I can describe it. It was terrifically well written, but you knew the end was at hand.

Mark Harmon – a treasure for sure!

CINDY BLACKMAN @ CUTTING ROOM — I’ve been a fan of Cindy Blackman ever since she appeared with Lenny Kravitz at a 1999 show at The White House (Clinton-style) guest Eric Clapton, performing a blistering performance of “All Along The Watchtower.” Despite being one of Clapton’s best-ever performances, Blackman is absolutely stellar on drums. Mr. Kravitz ain’t too bad either!

So, when I heard that Blackman was going to be at The Cutting Room, I just knew I had to see it. Last night, with her very able backing band, featuring Jaco Pastorius son on bass, they performed a great, high intensity set of jazz.

I mean, jazz in the caliber of Weather Report and The Tony Williams Lifetime-type. I loved it, but I fear the SRO crowd maybe just didn’t quite get it. Blackman has toured extensively with Santana and several years back, she and Carlos married.

I hung with Modern Drummer’s Billy Amendola who told me that Blackman was participating in a podcast for the magazine. She was definitely terrific; supremely atmospheric.

Truth be told, I would have loved for her to open with “Watchtower,” but that was not meant to be.

Per her web site: Her new album Give The Drummer Some features a 17-song tour de force album highlighting Cindy’s incredible versatility both behind the drum kit and in front of the microphone and features the creme de la creme of guitarists, including eight songs with Carlos Santana, two songs with John McLaughlin, three songs with Vernon Reid, and one song with Kirk Hammett. With multiple tracks produced by Grammy Award-winning Narada Michael Walden, the album is an eclectic mixture of old school funk and radio-friendly rock/pop combined with rock and jazz instrumentals.

SHORT TAKES — From Kent Kotal at Forgotten Hits: Falling into our Is That Really Necessary category this morning comes news that Asia will be releasing a 10-CD Box Set of live performances from the early 80’s, including 2-CD full concerts recorded in Buffalo, NY (1982), Worcester, MA (1983), Sao Paulo, Brazil (2007), Tokyo, Japan (2008) and London, England (2010).  (In that Asia never released a live album during their hey-day, wouldn’t ONE “best of” concert sufficed?)  The time-span encompasses the group’s very first tour in 1982 through several “reunion” shows spread throughout the rest of the decade. Street date is November 26th. I love Asia as much as the next one (and, Ken Dashow) – face it, their debut single “Heat of the Moment” in 1982 was simply stellar and its held up over the years, but 10-CDs? A collector’s item for sure … New album from Coldplay, Music of the Spheres …

Freda Payne, interviewed last week by SiriusXM for their 70’s show; speaks to Katie Bruno of the Closer this week. Her event at The Cutting Room, with co-writer Mark Bego, is locked for Monday, November 1. She’ll be on hand for sure …

HBO’s Succession roars back this Sunday. I’ve read terrific reviews one by one, then a not-so-hot-one from Vanity Fair, of all places. I’ll be watching nonetheless, as Brian Cox chews the scenery. A great show for sure … The Monkees at Town Hall next Sunday and The Paramount in Long Island … Happy BDay Markos Papadatos!