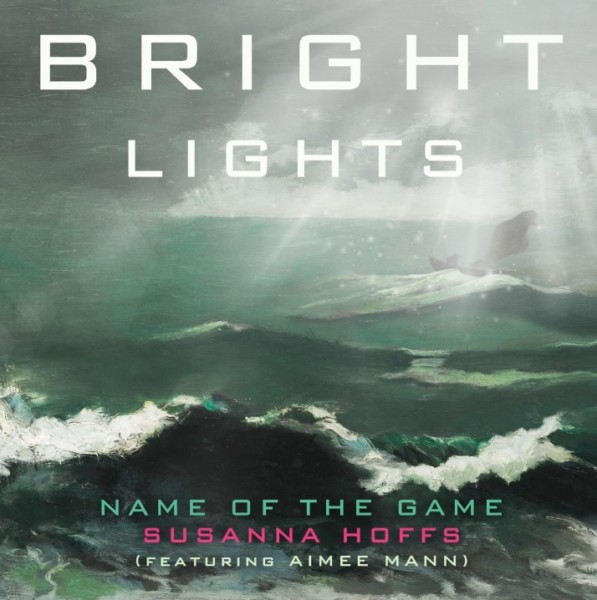 BADFINGER’S BACK — (Via Rock Cellar) On November 12, Susanna Hoffs will release a new covers album, Bright Lights — and as a preview of the new collection, the esteemed front woman of the Bangles debuted a version of “Name of the Game,” originally made famous by Badfinger.

Accompanying Hoffs on the new version is Aimee Mann, making for a very pleasant collaboration:

“There is a beauty and poignancy to ‘Name of the Game’ which has always moved me deeply,” Hoffs told Rolling Stone of her decision to cover this song. “The song’s verse lyric deals with coping with life’s difficulties and challenges, and those feelings are reflected in the verse’s gorgeous somber melody.  But when the chorus arrives, there is an opening up, an almost exalted intensity and release, an outpouring of all of those emotions, made even more poignant, knowing that Pete Ham, the singer and songwriter of the song, suffered so deeply.”

And regarding the collaboration with Mann, who also has her own new album coming out next month:

“I have known Aimee Mann since the Eighties and count myself extremely lucky to have had the privilege of performing with her numerous times. Aimee’s voice is iconic and instantly recognizable, and I’ve long wanted to record with her. When I was setting about recording ‘Name of the Game’ (with producer Paul Bryan), Aimee’s name sprung immediately to mind. She is a good friend. It was a true honor having her join me on ‘Name of the Game.’’

1. “Time Will Show the Wiser” – The Merry-Go-Round

Now, I loved the Bangles and love Aimee Mann even more, but the fact that they’ve teamed up on perhaps my favorite Badfinger song of all time, is simply amazing.

“Name of the Game” is from the group’s stellar Straight Up (1971) album and if you listen quite closely, you can even hear Beatle-George Harrison on the vocals; who produced the album with Todd Rundgren.

We won’t go into the tragic Badfinger saga as it’s really too troubling, but suffice to say, Pete Ham remains one of the best songwriters ever. He wrote “Without You,” which became a huge international hot for Harry Nilsson. Also, Badfinger had a major pop hit with “No Matter What.” Just a terrific ensemble.

I got a chance to talk to Joey Molland two years back on the 50 Years Ago tour and found him utterly delightful. Todd Rundgren was on that tour too and to witness Todd and Molland reminiscing about their days together was awe-inspiring.

EASY ON ADELE — (from Showbiz 411) Adele’s “Easy on Me” got a slow start on radio. When I wrote it about Friday. The top stations weren’t playing “Easy on Me” yet. In fact, it wasn’t until I said something that hourly adds started appearing on websites.

This evening, All Access Media Base reports that over 200 stations added “Easy on Me” to their playlists. There were 94 adds each on Adult Contemporary and Hot Adult Contemporary. (We used to call these Easy Listening or MOR aka Middle of the Road). There were 24 adds on another group called Triple AAA. (Those stations also added Sting’s great new single, “Rushing Water” and Elton John’s “Cold Heart” duet with Dua Lipa.)

I don’t think rock stations are playing “Easy on Me.” I’m sure they’re hoping she’s got a “Rolling in the Deep” type number on her “30” album.

But basically everyone who can is playing this record now, over and over. The single has had a minimum of 3,000 “spins” since its release on Thursday night across all these stations.

Add Adele to BTS and Lil Nas X and you have to give credit to Sony’s Rob Stringer and Ron Perry for pulling moribund Columbia Records out of a ditch. For years the company depended on Bruce Springsteen, Barbra Streisand, and Bob Dylan, not to mention Tony Bennett, to keep them going. Even Bryonce was iffy with an inconsistent release pattern. But they’ve got the top artists booming away right now. When “30” hits on November 19th, they will release confetti from their windows!

SHORT TAKES — Is one of my favorite actors Michael Caine retiring? At 88 he claims he hasn’t been offered a role in two years. I remember seeing him in 1965’s Ipcress File as super-spy Harry Palmer and it was love at first sight. He was Alfie in 1966; and, Woody Allen’s go-to-guy in the director’s brilliant Hannah and Her Sisters in 1986. Trust me, we haven’t seen the last of him – he’s just too good … Freda Payne and Mark Bego get interviewed by Adam White for his stupendous West Grand Blog this week; for their upcoming book Freda Payne: A Memoir (Yorkshire Publishing). White, for those who don’t recall, was Billboard’s best-ever editor! … Just learned that Tony Orlando has a show on WABC too; along with Cousin Brucie and Cindy Adams. Orlando, a music legend for sure …

The Monkees’ farewell tour is at NYC’s Town Hall this Sunday and expected to be there are Showbiz 411’s Roger Friedman; James Clash from Forbes and Ken Dashow from Q1043. Dolenz’s PR-man David Salidor told me that the press on this tour has been uniformly positive. Dolenz will go out after this as a solo act after, but what a nice tribute to have this Monkee-tour be so well received. Kudos … CBS’ FBI International has been the first new-show renewed for another season. We like NBC’s LaBrea, but so far, no renewal … Don’t know what to make of the latest The Batman trailer. Robert Pattinson as the caped crusader says his Bruce Wayne/Batman is in a somewhat confused state; not knowing who the real Bruce Wayne is. What??!! Say what you will, but the Batman-origin story is pretty well know; as are his main adversaries The Joker; The Riddler and The Penguin.

That said, Zoe Kravitz as Catwoman seems to be the most interesting character so far. Stay tuned. Here’s the trailer:

And, David Roberts and Neil Watson, the authors of the new Nilsson book, Harry & Me!, (This Day In Music) on November 1 will be hosting an event (in London) commemorating the 50th anniversary of the great Nilsson album, Nilsson Schmilsson. They are also celebrating the release of their book; which comprises more than 280 stories and memories of the esteemed singer/songwriter. Fans are invited to join the book’s authors for what will be a day of much merriment visiting London haunts Harry frequented back in the day. The Blind Beggar pub; outside Trident Studios (where the album was recorded); his Belgravia flat and the Antelope pub are all penciled in already.