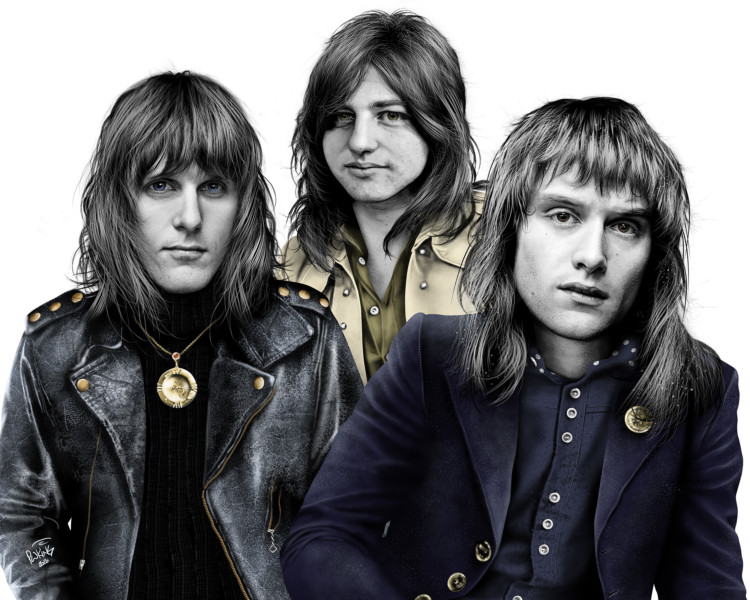 WELCOME BACK MY FRIENDS — Emerson, Lake  & Palmer drummer Carl Palmer said he was planning a virtual tour that would find him performing live alongside rediscovered film footage of late bandmates Keith Emerson and Greg Lake.

The prog-rock trio last performed together at a U.K. rock festival in 2010, after which Palmer told the others he didn’t want to do it ever again. He then went on to form his ELP Legacy project. Emerson died in March 2016 and Lake passed away nine months later; both had long-term health issues.

“That concert for me was sad, because as I was playing it, I knew this would be it,” he told Rolling Stone in a new interview. “I knew after the rehearsal period that I wasn’t going to be going on with the band. I didn’t want to be the one that pulled the plug. But I did wait a week after that concert, and I explained to both Greg and Keith, ‘I think we’ve done everything we can do. I don’t think we should go any further. We’ve treated the fans. We can’t tour it globally because of various health restrictions or whatever. And let’s just leave it now.”

“Keith was very happy because he had some major problems with his hand, and he said, ‘Carl, thanks for saying it.’ Greg was a little bit annoyed I’d made this decision and possibly he hadn’t. I didn’t see any reason to watch either of those guys suffer anymore. That was it.”

Palmer said there had been discussions about touring with an augmented lineup to help deal with the original trio’s limitations, but the drummer didn’t approve of that setup. He also planned to reunite with Emerson during an ELP Legacy tour before his death. The latest round of activity came when additional unused footage from ELP’s 1993 concert at London’s Albert Hall was found.

“I can actually have Keith and Greg playing on a large screen each side of the stage along with my band, and as all five of us playing together,” Palmer explained. “If it needs it, we’ll do what we need to do to make it sound as big. … But I will get to that when the time is right.” He reported that both late members’ estates have signed off on the concept, and it could come together in the coming year, with residency appearances in the U.S. part of the plans.

“That, to me, would be the way to present an Emerson, Lake & Palmer show again,” Palmer said. “That’s going to be extremely possible. It will look authentic, it will look real and it will be in sync. And it’ll be something better than a hologram.”

SHORT TAKES – Last week I saw the first FYC (for your consideration) ads for the upcoming Grammy’s. Usually the label takes these ads out, but in this case, the artist did. Kind of tacky if you ask me. What does it say if the label doesn’t think the record is worth a Grammy ad and the artist does. Kind of reminds me when the actress Brooke Smith from Big Sky took out her own ads and launched her own EMMY campaign (her mother was famed PR-doyenne Lois Smith, so she did know what she was doing). But, she wasn’t even nominated. Stay tuned. For more on this developing story …

Celebrity-scribe Mark Bego personally delivered the very first copy of BAND OF GOLD-A MEMOIR by FREDA PAYNE to her yesterday at The Bucks County Playhouse in  Pennsylvania where she is performing her Ella Fitzgerald tribute. She’ll be back in NYC Monday night for the launch party for the book at at Steve Walter’s Cutting Room. Details and photos to follow …

Interesting item from the new Paul McCartney The Lyrics book via Roger Friedman’s Showbiz 411:Paul McCartney recorded three songs with Michael Jackson in the early 80’s including “The Girl Is Mine,” “Say Say Say,” and “The Man.” The latter appeared on Paul’s “Pipes of Peace” album but gets short shrift even though I think it’s the best of the trio.“Say Say Say” is the only one of the three documented in Paul’s “The Lyrics” two volume memoir of songs that will be published on Tuesday. Considering what happened after these sessions– Michael bought the Beatles catalog out from under McCartney — Paul is very generous to Michael in the recollection. Initially Paul says he thought the high pitched voice on the other end of the phone was someone else. “I thought, This is a fan girl, and how the hell did she get my number?” Quickly Paul realized it was Michael Jackson, who asked him, “Do you want to make some hits?” Paul writes that Michael flew to London, and they met in his office. “We were both quite excited to work together, and the song came together quickly,” McCartney recalls in “The Lyrics.” He says: “I let him lead quite a bit, and I think a lot of the sensibility of the song was Michael’s. ‘Baptised in my tears’ — that’s a line I wouldn’t have used.” McCartney says of writing, “It’s a time of discovery, and that’s what I love about it.” There are two versions of “Say Say Say.” One was the hit, and the other was an outtake in which they reverse the singing parts. If you know the original, this other one is cooler … SIGHTING: PR-pasha David Salidor back at Indian eatery Mint in Brooklyn Heights .. And, speaking of Freda Payne and Mark Bego. The duo just confirmed a virtual-conversation with LA’s terrific Book Soup on Thursday, December 9.