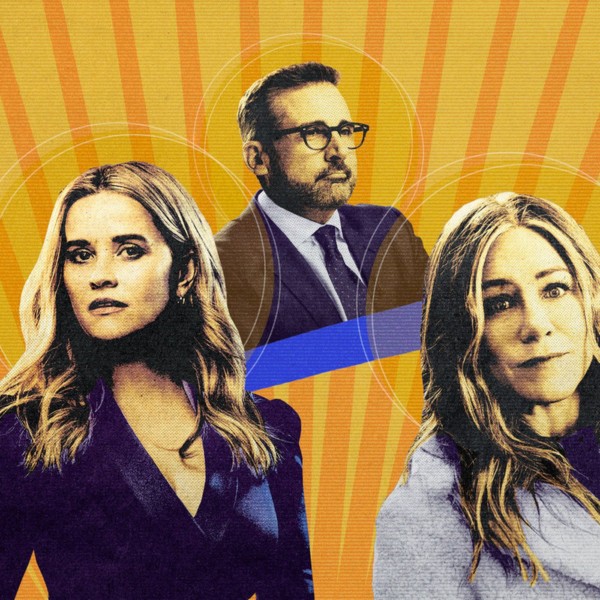 MORNING SHOW — Friday’s The Morning Show episode was in my opinion, not only the best show of the uneven Season Two yet, but may well be one of their finest episodes yet.

The sheer energy of the show in the opening moments immediately propelled it along and set the perfect tone. We watched as Cory Ellison (Billy Crudup) psyched himself up for another day at the office. In the elevator he confronted Stella (a stunning Greta Lee) and explained away her last negative conversation with him.

We flashed to the opening minutes of the TV broadcast when unconfirmed rumors of Mitch Kessler’s demise began pouring in. Producer Mia, terrifically moved by the events, said she needed two confirmations before they could take the story to air. Cory said that the station should be the first with the news and ordered producer Chip (Mark Duplass) to find co-anchor Alex Levy (Jennifer Aniston).

Chip deduced that her plane was returning from Italy at Teterboro airport in New Jersey and drove there to meet her head-on. Aniston’s portrayal of the beleaguered Alex is a testament to her fine acting. Chip welcomed her back, but then told her of the rumor surrounding Mitch’s potential demise. She said she was just with  him in Italy, but in due course, everything was confirmed.

Say what you will about Mitch Kessler, but the women he became involved with truly had feelings for him and the more I think about it, so did Mitch; as he did say to Alex in the previous episode, she was the one.

In these MeToo times, you’ve got to be cautious about not only what you do, but what you say … so, it was a nice revelation, that these women, so-called preyed upon by the character, actually did care for him. I don’t know who write this episode, but they deserve an Emmy. Truly heartfelt and save for one idiotic conversation that went on a bit too long, was a perfect episode.

I for one will miss Steve Carell, who to me just a brilliant actor. His performance in the previous episode where he questioned all his actions was just brilliant. And, we still don’t know whether the accident was indeed just an accident or a suicide. Honestly, we’ll probably never know.

THE BLACKLIST — We’re big fans of James Spader. Just a brilliant and often underrated actor. As The Blacklist entered their new season without Elizabeth Kean (Megan Boone), who perished at the end of last season, there were those who felt the series had no place to go. There was a two- year time jump, but the gang sans Elizabeth, is all back and the four shows so far have just been off the charts.

Let’s cut right to the chase and say that Reddington’s former ally Dembe, is now an FBI agent and essentially has replaced Keen. I don’t think anyone saw this coming and it works remarkably well, although how he became an agent remains a mystery for a future episode no doubt.

Based in Havana for the last two years, Red has re-emerged as a key player. With his shaven head and new casual wardrobe (and, ensconced in a Mercedes black G-wagon), he’s deadlier than ever.

Nine seasons in, this show remains as on track as ever. I am loving it.

SHORT TAKES — Donald Berman, one of The Views’s original producers has retired after a long and illustrious career. Let me be the first to say, in all the years I’ve known him and worked with him, I’ve never known a more approachable and honest fellow. We’ll miss you my friend. Thanks for all the kindness … Just heard that Freda Payne will be making an appearance on a AM-talk show later this week. I’ve been sworn to secrecy … but, stay tuned as it’s a biggie …

Am watching the new/old CSI: Las Vegas with Billy Petersen. Pretty terrific. The new cast doesn’t have the staying power or charisma of the original cast, but the shows have been pretty good. The genie’s out of the bottle, but they’ve concocted a pretty good yarn …

We caught The Cutting Room’s terrific reprise of the music of Hair led by bassist Mike Visceglia. We caught the original presentation back in August and just loved it. With 13 people onstage, it was just a masterful production. Notable this time was vocalist Audrey Martells, who was just exquisite. The music was from the original 1968 presentation of the show by James Rado and Galt MacDermot. They don’t write ’em like this anymore, so it was a true masterclass. Just brilliant. We sat right next to producer Tony Visconti who seemed to love the show. Also there, PR-pasha David Salidor. Great time. Thank you Steve Walter …

Sunday, November 14 is the date of the final Monkees show in LA at the Greek Theatre. The shows have generated just terrific press and according to PR-man David Salidor (who handles media for Micky Dolenz) “The media’s been uniformly sensational, heartfelt and often poetic. What with Micky’s Dolenz Sings Nesmith album earlier this year which garnered just terrific reviews, it’s been a stellar and memorable year for him” … RIP Dean Stockwell.