MONTE’S GOLD — (Via Showbiz 411) John Legend’s first album was his biggest hit. “Get Lifted,” released in 2004 was the beginning of his career.

Now, 17 years later, Legend– whose real name is John Stephens — has left the label and signed a deal at Universal’s Republic Records. Republic is the hottest label in the music business.

Legend’s last Sony-Columbia release was a dud, selling just over 200,000 copies. It was called “Bigger Love” and it didn’t have any singles or radio friendly songs. Did anyone at Sony “A&R” it, as they say, i.e. supervise it or executive produce it? My guess is, no.

John told Variety in 2020: “The way you monetize your work is through so many other things, beyond streams and physical sales. For me, recording is about building my legacy and my brand, and using it as a calling card to do other things, like perform live. We can do it on our own; the question is, do we want to? Columbia has been cool. I’ve been there since the beginning of my career, and we’ve had a lot of success together. Obviously, personnel changes matter — [chairman/CEO] Ron Perry is fairly new there, and we’re getting to know each other — but we’ve had a great run there. Ask me in a year.”

Sony has also lost a very big act, BTS, which moved to Universal Music, and R&B legend Maxwell, in the last few months. BTS’s move is tied up with the company that owns the Korean boy group and their deal with manager Scooter Braun, who is tied to Universal. Maxwell hasn’t released a new record since 2016. Indeed, he’s only had five albums in 25 years. Now he’s left for vanity label BMG, where his music will sink like a stone into obscurity.

Sony has had some hits this year, with BTS, but also with Lil Nas X and with The Kid Laroi. They may have a Beyonce album coming. (No one ever knows.) When they release Adele’s “30” album next Friday, Sony will be on top of the world again. So John Legend and Maxwell may seem old hat to them. And BTS? Well, that’s the way the cookie crumbles.

Republic’s Monte Lippman -and, his brother Avery- have really built the label into a powerhouse. If memory serves, the brilliant Doug Morris gave him the keys to the highway when he departed. He’s a low-key guy, with his ear really to the street; born in Brooklyn no-less.

As for Legend, he’s indelible … in the record-books for sure, but it’s so difficult these days to resuscitate a career. Many have tried, but it’s virtually impossible. Ask Usher or Mariah Carey or Debbie Gibson or Harry Connick.  Having a major label definitely helps, as that’s where the funds will come from to feed the machine.  But, that said, if anyone can do it, it’s the Brooklyn-born Lippman. One of the new-era gunslingers for sure.

FREDA’S VIEW — I don’t know if you caught it Friday, but that was indeed “Band Of Gold” songstress Freda Payne singing her worldwide hit to The View’s Whoopi Goldberg on her birthday show.

In town for more media on her just-released charted memoir Band Of Gold-A Memoir (via Yorkshire Publishing) she joined in with Anita Ward, signing her terrific hit “Ring My Bell,” for the celebration. Freda signed copies of her book to the 5 hosts and posed for pictures with the cast … and, she looked super-great!

Also, as a surprise guest, was Nicole Wallace, who in my opinion is one of the best on-screen newscasters out there. As Whoopi herself said, Nicole, a past host of the show, became a fast friend.

As we’ve all watched far too much news in my opinion in the last 16 months, she’s stood out .. and, deservedly so.

I hadn’t been up to The View in quite some time and was surprised to see they’ve relocated to West 66th (re-christened Studio 66 on Friday) street from their original West End studio. A tightly run ship, I was thoroughly impressed. Thanks for producer Susan E. Harrington for her assistance.

btw; there’s a hardcover version of the book for a bit more money, but having just received my copy, it is simply sumptuous.

EDGE RIP — Graeme Edge, drummer and co-founding member of the Moody Blues, has died at the age of 80. The Rock & Roll Hall of Fame-inducted British prog band announced Edge’s death Thursday. No cause of death was revealed.

“It’s a very sad day. Graeme’s sound and personality is present in everything we did together and thankfully that will live on,” Moody Blues singer Justin Hayward wrote on Facebook. “When Graeme told me he was retiring, I knew that without him it couldn’t be the Moody Blues anymore. And that’s what happened. It’s true to say that he kept the group together throughout all the years, because he loved it.”

Moody Blues bassist John Lodge added on Twitter, “Sadly Graeme left us today. To me he was the White Eagle of the North with his beautiful poetry, his friendship, his love of life and his ‘unique’ style of drumming that was the engine room of the Moody Blues…”

Edge was a member of the Moody Blues from their formation in 1964 — when they briefly featured future Wings member Denny Laine, who features on their first hit “Go Now” — through his death; as Lodge and Hayward joined following Laine’s departure in 1966, Edge was the only Moody Blue to be a member of the band’s entire existence, although the drummer retired from touring in 2019.

“When Denny Laine left, that almost broke up the band,” Edge told Rolling Stone in 2018. “We had to get a new lead vocalist and [bassist] John [Lodge] came in. That’s when we started to reorganize and rethink our direction.”

“In the late Sixties we became the group that Graeme always wanted it to be, and he was called upon to be a poet as well as a drummer,” Hayward added. “He delivered that beautifully and brilliantly while creating an atmosphere and setting that the music would never have achieved without his words.”

In addition on every Moody Blues album, Edge also provided the spoken word interludes, like “Late Lament” on the album version of “Nights in White Satin” (recited by pianist Mike Pinder) and “Departure,” which opened the 1968 LP In Search of the Lost Chord and preceded the hit “Ride My See-Saw.”

In 2018, Rolling Stone spoke to the Moody Blues for an oral history about “Nights in White Satin,” including Edge’s contribution to the hit.

“I was trying to write a song… called ‘Morning Glory,’ with lyrics between morning and evening,” Edge said. “Then I went to the guys and said, ‘Can you do anything with this?’ I spoke the lyric out to them and they looked at me and said, ‘There are just too many words. There’s no way you can sing this!’ Then Tony Clarke said, ‘Oh, make it a poem!’”

Edge continued, “At the time Mike [Pinder] had a much more gravely kind of voice. Cigarettes and whiskey had modulated his chords a bit more than mine. If you had a high-pitched voice it doesn’t really work on the poem.”

(As for the song’s success, Edge joked, “Some time later they interviewed the DJ who got it going in Seattle and he said, ‘I was on the graveyard shift and I wanted to go out into the car

PR-man David Salidor, worked with the group in it’s heyday on the much-missed London Records and says: “Graeme was always a tad mischievous; but a totally creative fellow. We had a lot of fun together. WIll be much missed for sure.”

SHORT TAKES — Paramount +’s Yellowstone with Kevin Costner had somewhere between 8 million and 14 million viewers for their season premiere? That’s pretty amazing considering it’s on a streaming service. Impressive … I just love the trailer for Amazon’s Being The Ricardos (here it is:

but it does look a tad dark; especially the scene where Lucy (Nicole Kidman) seems momentarily dazed by the audience.

Aaron Sorkin’s work is nothing short of brilliant and I’m amazed the this project came together so quickly. It seems like they announced it only a few months ago. Can’t wait for this one  … Micky Dolenz and band just announced a Saturday, January 22 show with Felix Cavaliere at NY’s Palladium; formerly that terrific Lowes Astor Plaza Theater and most recently the Nokia Theater and Best Buy Theater ...  HAPPY BDAY Eppy! 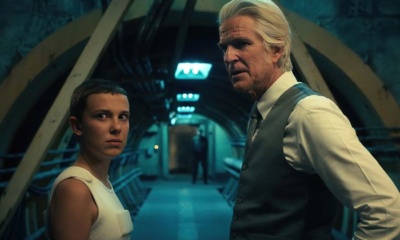