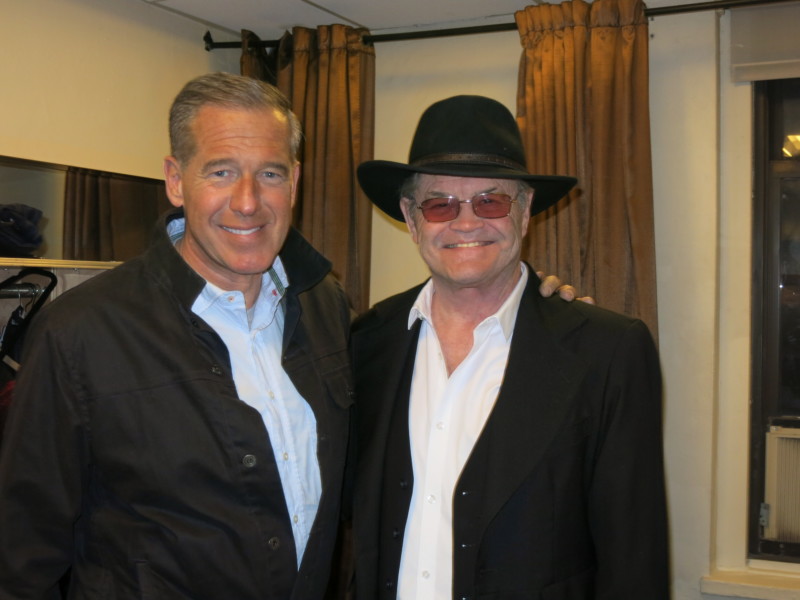 LYIN’ BRIAN LEAVES MSNBC — Here’s my Brian William story: I absolutely loved him on the Nightly News at NBC … and, then I met him at an event. I was with some co-workers and after we introduced ourselves, he went on about himself and his career for a good 20-minutes.

I left that encounter with the definite feeling that Brian likes the sound of his own voice a little bit too much.

He came out with a statement this week that after a 28-year run at NBC, (and MSNBC) he was leaving -as his current contract is running out- to spend more time with his family. That’s code for he asked and didn’t get, more money.

Strange fellow for sure. I still think he’s a brilliant broadcaster, but if you’re not telling the truth … that’s a problem.

MSNBC is also losing the nightly services of Rachel Maddow, their #1 cash cow. She’ll still be on, maybe once a week and developing other shows. Tough times for the cable-caster.

HANKS’ FINCH — On a cold Saturday night in NYC, this first of many yet to come I fear, we watched Tom Hanks’ latest (Apple TV) Finch. Save for a robot and a dog named Goodyear, it’s only Hanks and I loved it.

Finch is apparently the last man on earth after what seems to be some sort of catastrophic event.

What other actor, save for Hanks, could pull off a feat like this. He did it in Castaway (2000) and he’s doing it again here. In that movie, he basically acted with a volleyball. Here with a dog and Jeff, the robot he builds, there’s a bit more dialogue as Jeff actually speaks … and, eventually drives! Its interesting that Hanks character beginsbuild a relationship with the robot and they exchange some key dialogue.

Except for once scene where they’re followed by a mysterious car … that suddenly disappears, I loved the script, the effects and the buddy relationship with Jeff.

Writers Craig Luck and Ivor Powell have delivered a stellar script and in Hanks’ able hands, a stellar performance. Here’s the trailer:

Similar in mood  to George Clooney’s recent  The Midnight Sky, I loved this one. Thanks Hanks!

SHORT TAKES — Is Jeffrey Donovan, late of the great Burn Notice series on USA, slated for the new, re-booted mothership Law & Order? I don’t see his casting at all … NBC has renewed their La Brea series about a giant sink-hole in Hollywood. Make your own joke here. Viewers are divided. Half-think it’s a great series; the other half, think it’s a joke. I loved Debris last year on the network and that got canceled. Honestly, La Brea is a little-less serious than their Manifest, which was canceled, then became the biggest series on Netflix and then renewed … by Netflix. NBC is having a bad, bad year ….

Musician Dave Mason (who I’ve always loved) is releasing a bio next year via BMG books titled Only You Know and I Know … co-written with Chris Epting, who got so many facts wrong when I tuned into a recent Facebook Q&A, I was stunned this was his biographer. In the brief explanation, it says that Mason will go into a lot of never-before-talked-about areas like a cocaine addiction; the death of his son; and his well-documented-battles with various record companies, but I want him to discuss a former manager, one Jason Cooper; affectionately termed The Moke. Cooper was the man who drove Mason’s success with Columbia Records in the 80’s and, then suddenly disappeared. I well remember a concert at the long-gone Calderone Concert Hall in Hempstead, New York, when the band gathered in Mason’s dressing room, with Copper, and suitably prepared for the show. It was a great show, as were most of his shows in those days.