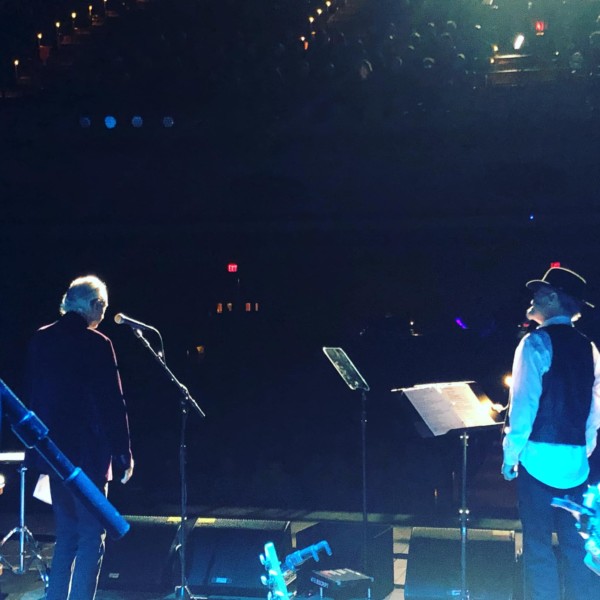 THE MONKEES TAKE THE GREEK — Sunday’s final show of The Monkees, at the Greek Theater in LA,  sounds like it was a terrifically memorable event. Former LA Times music critics Randy Lewis filed this report for us:  It was a sweet, poignant farewell performance Sunday night by the two surviving members of the Monkees: Micky Dolenz and Michael Nesmith, who wrapped up this swan song tour at the Greek Theatre here in L.A. For more than two hours they coursed their way through an impressive body of songs that began in 1966 with their introductory hit “Last Train to Clarksville,” from Tommy Boyce and Bobby Hart, and went on to include masterful pop songs from the likes of Carole King and Gerry Goffin, Barry Mann and Cynthia Weil, Neil Diamond, Harry Nilsson and John Stewart. This show was also generous with songs written by Nesmith, from “Papa Gene’s Blues,” “Sweet Young Thing” and “Tapioca Tundra” through “You Just May Be the One,” “Sunny Girlfriend,” “Different Drum” and, in what was perhaps the most moving segment of the evening, “While I Cry.” Nesmith, 79, has surmounted recent health issues to resume a tour that had been interrupted by the pandemic, and appeared more fragile than frail during the show. He spoke endearingly of the way he and his bandmates had bonded with one another and with their fans so long ago through the common affection for the music they played. His voice was strong and emotion-packed. At other times during the evening his vocals were harder to discern, while Micky’s voice, at 76, was as distinctive and assertive as ever while he served as both emcee through most of the show, and lead vocalist on much of the material. Tour producer and Monkees archivist Andrew Sandoval once again made sure they were supported by a stellar band that, like the Brian Wilson Band of recent years, has studied the recordings and nailed the arrangements down to the last guitar effect, drum fill and keyboard sound, while also serving up so many multi-layered vocal harmonies in spot-on fashion. The Monkees’ journey of 55 years has indeed been a long, strange trip in many ways, but one the created much joy–evidenced by the number of preteens, teenagers and young adults in the audience singing out for all they were worth alongside the parents and, likely, grandparents who accompanied them. Nesmith underscored the two-way street of this group’s remarkable longevity when he emphasized the refrain to “Tapioca Tundra”: “It cannot be a part of me, for now it’s part of you.” Thanks guys. It’s been the pleasure of a lifetime.

OLIVER FINALE — (via Deadline) John Oliver decided to close this year’s season finale with fewer explosions and more star power. During the Season 8 finale Sunday night, the Last Week Tonight host called on his reliable celebrity friend George Clooney, a person he conjures almost every episode with the snap of his finger, to make him feel a little less drab about the year’s events.

Oliver requested that the Oscar-winning actor cheer him up, with Clooney acquiescing a bit out of pity.

“I’m not supposed to do this, but you seem more pathetic than usual,” Clooney said before granting Oliver the power – by way of a finger snap – to summon any celebrity he wants for a few minutes. The personalities that followed seemed to offer much-needed comedic respite from Oliver’s show.

In a humorous bit, Jennifer Coolidge appeared and confused the British American host for other colorless, late-night talking heads like Jimmy Kimmel, Jimmy Fallon and his fellow statesman James Corden.

Will Ferrell was caught onscreen and scorned the Emmy-winning late-night host while weaving his own likeness into an embroidery hoop.

RuPaul then appeared in full dress and makeup and attempted to shoo Oliver away à la Drag Race.

“I’m not a contestant on your show,” the HBO host replied. “It’s me, John Oliver.”

“Oh gosh, I thought it was one of the queens dressed as a marionette doll,” RuPaul quipped.

After cycling through Cardi B, who confused Oliver for Amazon’s Alexa voice; Kevin Baumgartner, who thought he was doing a cameo, an occupied Leslie Jones; and the Void, a cartoon character voiced by H. Jon Benjamin who would appear on the blank wall of Oliver’s audience-less set and was in middle of preparing for his own late-night show; Clooney returned to teach Oliver a lesson in self-awareness.

“Just because this year didn’t work out like you thought it would, that doesn’t mean that shamelessly bringing in celebrities for the finale wouldn’t cheer you up because — say it with me — ‘celebrities make everything better except in the many situations where they do not,’” Oliver and Clooney said in unison.

Shortly after signing off, Oliver tackled the Void after it was revealed the cartoon head’s main topic would be 9/11 conspiracy theories.

I like Oliver; his show does make you think. I love Fallon too, but it’s like a too-long SNL sketch and Kimmel is funny, but his sarcasm is often a bit hard to take. Face it, Carson and even Merv were the best … and, they always will be!

After seven weekends of offshore release, No Time To Die continues to bond with audiences and has crossed $700M global. Importantly, that includes over $558M at the international box office, making Bond 25 the biggest Hollywood movie overseas in 2021 and throughout the pandemic era, overtaking F9. Globally, it is currently sitting about $12M behind F9. The Cary Joji Fukunaga-directed NTTD had a great start in Australia this session and has now surpassed Skyfall’s lifetime in 18 markets and Spectre’s lifetime in 22 … Speaking of Payne, check her out at Birdland in NYC this Monday night (https://birdlandjazz.com/) …

I heard Q1043’s Ken Dashow mention that The Rolling Stones make in excess of 10 million per show. Wow! I mean, they certainly deserve it, but I’d love to know how that breaks down after paying the band, the crew, light and sound and staff. Still, very impressive … SIGHTING: PR-pasha David Salidor at Table 87 in Brooklyn … The 60 Minutes story on The Beatles’ new and improved Get Back movie didn’t impress at all. First; the legendary Twickenham Studios where the production began wasn’t even mentioned; and, Two: original director Michael Lindsay-Hogg wasn’t mentioned either. I love Peter Jackson, but, he didn’t shoot ANYTHING … and, most likely was still in school when this all happened. He’s 60. Again, I’m not in the business of revisionist history and cannot for a moment champion this thing at all …  Dave Mason, after sitting out the pandemic at home in Hawaii, has announced a tour starting in January with The Marshall Tucker Band. I never would have guessed that one. Amazing if you ask me … Happy 70th Bday to Stephen Bishop … And, finally, hard to believe the Harry Potter series is 20 years old. and, they said it wouldn’t last!