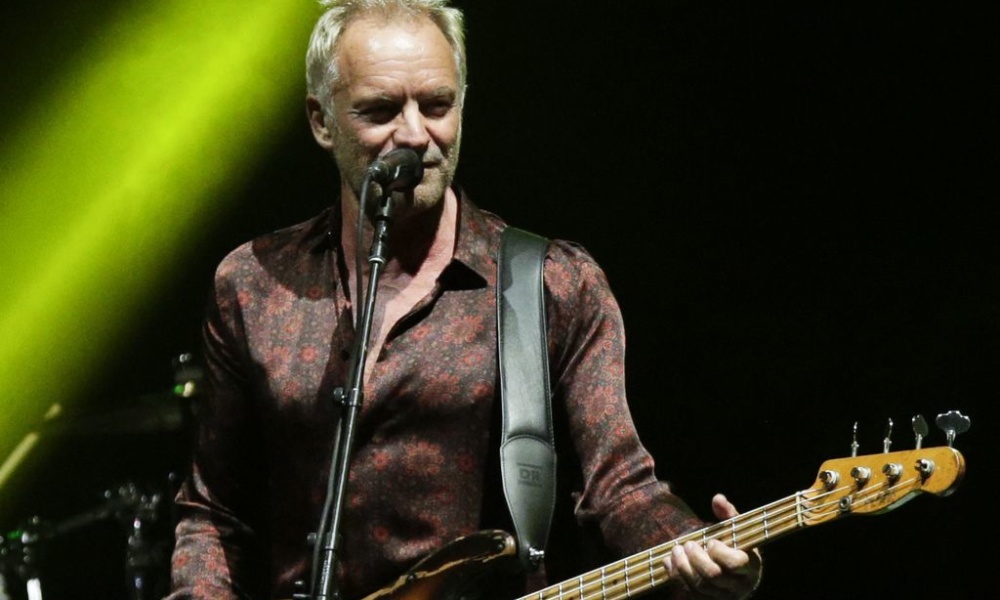 STING STILL STRONG — (via Showbiz 411) Word is spreading fast that Sting is joining the ranks of other top rock stars and composers. He’s said to be shopping his catalog of songs for at least $250 million.

The catalog includes “Every Breath You Take,” “Fields of Gold,” “Fragile.” “Roxanne,” and a plethora of other hits that can be monetized easily. Dozens of Sting written songs can be covered by other artists or used in movies or commercials.

I reported a couple of years ago when Paul McCartney cited “Fields of Gold” as the song he wished he’d written. He probably said that because “Fields of Gold” is a gold mine for any publisher.

Of course, “Every Breath You Take” was awarded most played song ever by BMI last year.

There are a couple dozen more hit songs Sting wrote for The Police including “Every Little Thing She Does is Magic” and “Don’t Stand So Close to Me.” Then are the solo hits, including a number of lesser known songs just from the last five years that are ripe for the picking. The sale would include the songs from Sting’s Broadway show, “The Last Ship.”

Sting has a sensational new album coming out tomorrow night called “The Bridge.” He’s “only ” 70 and clearly not going to stop working any time soon. So the catalog’s value just increases more and more.

Sting is one of the best artists out here and methinks his music would be a goldmine for anyone. Interesting how this song-selling-mania has become de rigueur of late: Paul Simon, Bob Dylan, Fleetwood Mac … I don’t know if it’s a result of the pandemic –and not touring for almost two years- but, it is a sign of the times. With an estimated worth of $400 million already, I wouldn’t cry for der Stingle just yet. Stay tuned!

MIDAS TOUCH — (Via Deadline) Midas Man, the biopic of Beatles manager Brian Epstein, has hired a new director as it looks to get back into production as soon as possible.

Sara Sugarman, known for directing movies including music comedy Vinyl, Lifetime’s House Of Versace and Disney’s Confessions Of A Teenage Drama Queen, is newly aboard.

As we revealed earlier this month, the movie entered hiatus as producers sought to replace director Jonas Akerlund.

Akerlund told us today: “I regret that things haven’t turned out as we had planned on Midas Man. I wish Jacob [Fortune-Lloyd] and the team the best with the film.”

The Queen’s Gambit co-star Jacob Fortune-Lloyd stars as Epstein in the biopic, alongside Emily Watson, Eddie Marsan, Lukas Gage, Rosie Day and Bill Milner. The project charts Epstein’s role in the creative explosion of the 1960s and his sizable influence on pop music.

We understand exit terms are being discussed with Akerlund and that he could still get a credit on the movie given that the production won’t be re-shooting scenes already in the can. Some key crew will remain, others will be replaced.

Sources close to production have re-confirmed to us that the director’s exit from the film largely came about due to a belief that other commitments were getting in the way of Akerlund’s work on Midas Man.

Filming began last month in Liverpool but has been on hold for almost three weeks. Producers are aiming to re-enter pre-production next week and hope to start filming again from November 29. Filming is due to continue until early February in the UK and U.S.

The movie still has a few important roles to be unveiled, including the actors playing the Fab Four.

Brit filmmaker Sara Sugarman grew up near Liverpool and in her teenage years was herself in a band. She has worked on multiple music-themed projects including Vinyl and Very Annie Mary, and also had a supporting role in rock biopic Sid and Nancy. She most recently directed Sky Original movie Save The Cinema, which is due for release in January, starring Samantha Morton, Tom Felton, Jonathan Pryce and Adeel Akhtar.

Filmmaker and music director Akerlund is best known for movies such as Sundance pic Lords Of Chaos, Polar with Mads Mikkelsen, and music videos for the likes of Paul McCartney, Madonna, Beyonce, Lady Gaga and Taylor Swift. He also was due to have an input on the soundtrack of Midas Man. The Swedish filmmaker remains in post-production on Netflix TV series Clark.

SHORT TAKES – I didn’t see all of Adele’s recent CBS special; but it beat the last few Grammy-shows in the ratings …

Freda Payne, who appears at NYC’s Birdland Monday, does an hour interview Friday with Robert Shahid on his widely heard Master Class program on WEAA-FM. This interview can be heard at https://www.weaa.org/show/master-class-with-robert-shahid … She’ll also appears at Baltimore’s Keystone Korner Friday and Saturday …

We just received a copy of Elton John’s The Lockdown Sessions and on first listen, we absolutely love it. Especially “Chosen Family” with Rina Sawayama. More next column …

Check out Keith Girard’s New York Independent for an article on the new Harry Nilsson Harry and Me! tome: https://www.thenyindependent.com/music/336792/harry-nilsson-recalled-new-book/…

Remember The Oxfords? Is there new music coming? Stay tuned … According to old pirate Dave Mason: this week is the 50th anniversary of the release of his forever-golden Alone Together album. His so-called followup album Alone Together Again died a horrible death in the marketplace. Still, that first album was utterly brilliant … Celebrity-scribe Mark Bego’s parents just celebrated their 70th wedding anniversary. Congrats! … And, Happy BDay Cody Gaier and Lanie Speiser!

G. H. HARDINGJanuary 3, 2022
Read More
Scroll for more
Tap
The Paley Center for Media Reopens with the Return of PaleyLand Holiday Extravaganza
How to Bet on Virtual Sports