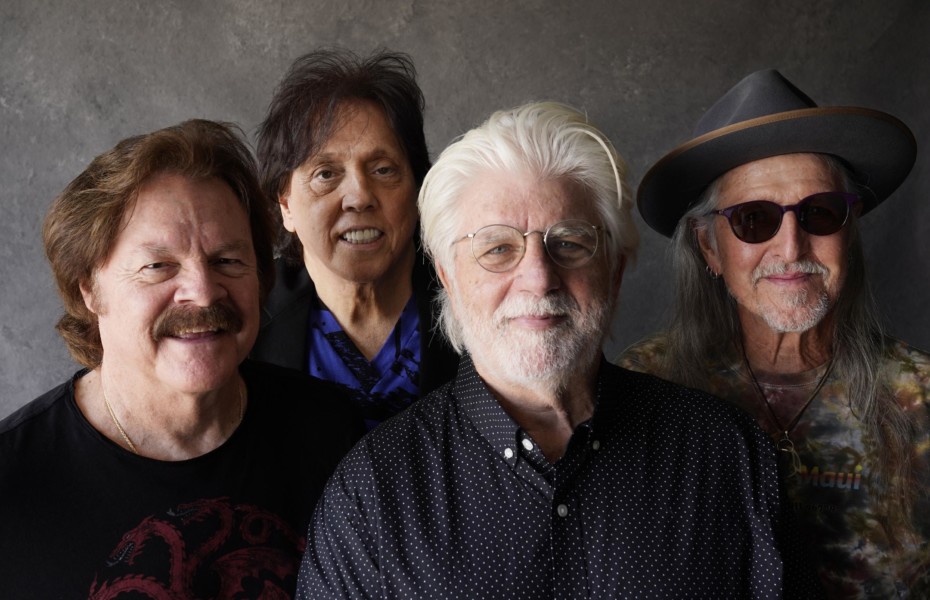 DOOBIE ON — (Via Rock Cellar) In the works for some time and delayed because of the pandemic, the Doobie Brothers‘ 50th anniversary tour has been a triumph. With Michael McDonald in the mix to make the shows that much more memorable, the tour is a victory lap for the recently inducted Rock & Roll Hall of Fame band — and now, the outing has been extended a bit.

The Doobies added 11 new dates to the schedule this week, with the tour’s next leg now starting back up on June 2 and wrapping on Oct. 12. More on the new shows, per JamBase:

And coming up in May, an official memoir from Tom Johnston and Pat Simmons will tell the story of the Doobies as only they could.

Officially penned by Johnston and Simmons alongside writer Chris Epting, here’s the synopsis of Long Train Runnin’: Our Story of The Doobie Brothers:

Only a very few rock bands have had the longevity, success, and drama of The Doobie Brothers. Born out of late 1960’s NorCal, and led by Pat Simmons and Tom Johnston, they stood alongside their contemporaries The Grateful Dead, The Allman Brothers, and many others as an iconic American rock band. The train was rolling along, hits were flowing like wine, and arenas were packed with fans who wanted to see them live…then Tom Johnston, the band’s front man and lead guitarist, became ill and had to leave.

The Doobies’ train came to a screeching halt. All of a sudden the band started contemplating the end of the road only seven years into their career, just as things were taking off. But Pat Simmons made sure they were far from the end and began the process of keeping the band together through most of the next decade.

A soul-steeped backup singer for Steely Dan named Michael McDonald took a shot at singing some of the Doobies’ songs on tour, and all of a sudden a new chapter in the Doobie Brothers’ story began. The band expanded their sound and had even more hits with their new front addition. Tom recovered from his health issues, but the band had moved on. When it came time for a reunion concert in the 80’s, Tom got the call and was back in the mix. Led once again by Pat and Tom, The Doobie Brothers have been touring ever since and maintain a massive fan base the world over.

Never before have Pat and Tom shared their story, in their own words. In Long Train Runnin’ they’ll change that. 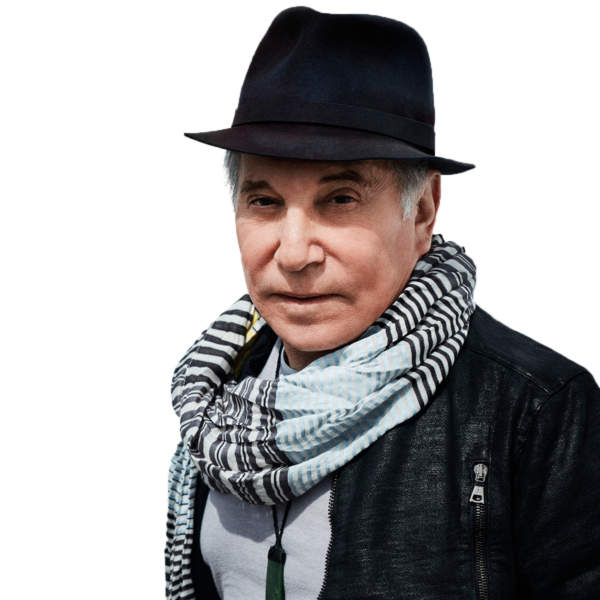 SIMON DO — (Via Showbiz 411/Roger Friedman) While a huge chunk of the music business at Clive Davis’s 90th birthday extravaganza in New York, another big event was going on in Los Angeles.

As I told you first last week, the Grammys filmed a TV tribute to legendary singer songwriter Paul Simon. The show, produced by Ken Ehrlich and written by David Wild, will air on CBS sometime this spring or summer.

And Paul Simon himself. The 195 minute taping concluded with Simon performing “Graceland,” “American Tune” with Giddens, and “The Sound of Silence.”

Other artists also included Garth Brooks and Trisha Yearwood, the Jonas Brothers, Eric Church, Jimmy Cliff, Ledisi, the Bangles’ Susanna Hoffs, and Eric Idle plus the Puddles Pity Party. Not in attendance: Art Garfunkel, because he was in New York singing at the Davis birthday.

Not all of this will make a two hour special on CBS. But it would be swell to see it all on Paramount Plus one day.

How did it all turn out? We’ll have to wait until the producers do their magic and we see the finished product. But it sounds amazing. Bravo Paul Simon!

SHORT TAKES — Major bloodbath this week at Warner Media as the company segues to Warner Discovery shortly; with Discovery’s David Zaslav purging six top execs, including Ann Sarnoff and Jason Kiler, who brainstormed the day-and-date release for several Warners-movies last year-meaning that the day it premiered, it was also available on HBO Max. Say what you will – and many believe that move instantly killed the movie business; it made the new movies much more available. Zaslav has his supporters and naysayers, so it’ll be interesting to see what he makes happen … Interesting review for Debbie Gibson’s The Body Remembers album from last October from V13.net’s Christopher Long. A Deb-head for sure, I think he pretty much nailed it. Great album; no Electric Youth, but a great album. Check it out here: https://v13.net/2021/10/debbie-gibson-the-body-remembers-album-review/ … 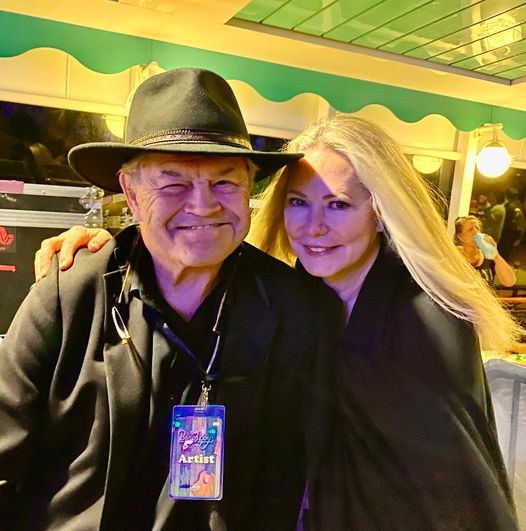 Micky Dolenz, currently on tour with his Monkees-celebration show, speaks to Forbes.com writer Jim Ryan next week. Speaking of Dolenz, here’s a great shot of him with wife Donna from the Beach Boys Cruise by Natasha Rubin … This weekend are the last two episodes of AMC’s Killing Eve, which has become big favorite and for my money one of the best shows ever on cable. There is some talk about a possible spin-off with one of the characters. Check out the story from Deadline: https://deadline.com/2022/04/killing-eve-spin-off-on-spymaster-carolyn-martens-in-development-bbc-america-amc-networks-1234995490/ … 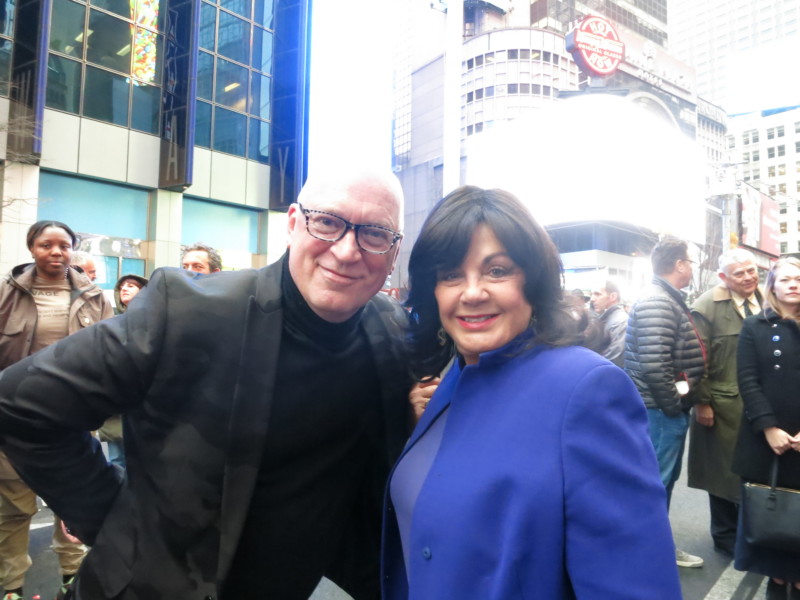 And, Thursday saw The Times Square Alliance and Playbill officially unveil the Grand Gallery in Times Square, in which Donnie Kehr performed at and served as MC. Under threatening skies Kehr welcomed the crowd with his song “New York City Strong,” (accompanied by Kevin Kuhn) which will be on his forthcoming album Beautiful Strange on Jazzheads Music Group. Also performing were Broadway favorites Jessica Vosk and Alex Newell, along with remarks from Times Square Alliance President Tom Harris, Playbill’s Alex Birsh, and Broadway League President Charlotte St. Martin. 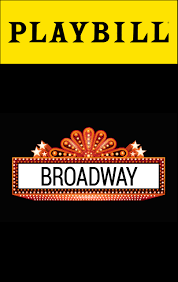 The entire event was filmed for streaming on Playbill.com. Seen in the crowd were the PATH Fund’s Cori Gardner and Kehr publicist David Salidor. Bryan Campione, from Playbill  who directed the terrific event. A surprise guest was Mayor Eric Adams who delivered a stirring message to the crowd. A great event for sure as NYC gets its groove back.