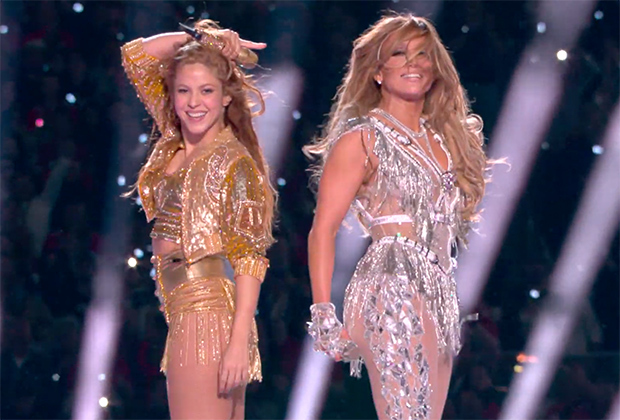 J LO FOREVER – It was a pretty spectacular Super Bowl Sunday night; in fact, it was certainly better than the slew of commercials they premiered. Face it, that Jason Maomoa one, with wife Lisa Bonet there too, was pretty lame. And, that Bill Murray one, harkening back to Groundhog Day was also pretty silly.

Truth be told, I liked the one with Marty Scorsese the best! Dunno why, but Scorsese always makes me smile.

Funnily enough, earlier in the day I watched Prince’s Super Bowl performance back in 2007 and it was still pretty smoldering. Performing :”Purple Rain” in the rain was a pretty neat trick.

I’ve never met JLO, but have always been in awe of her work ethic; rehearsing, practicing, making in as good as it can be seems to be her mantra. When you think about it, she’s made a pretty good career, when she’s really had only three major turntable hits, “Jenny From The Block” “Waiting For Tonight” and “Let’s Get Loud,” but, boy she’s eye candy for sure.

I loved her in the recent Hustlers; not a real brain teaser of a movie, but she was simply terrific.

Of course, her Super Bowl appearance started with her descending from a lighted-pole. For the kids? Dunno, but she sure was sight to see. She’s 50, but looks like 25 and totally commanding onstage. She was sight for sure.

Shakira was good too. Her “Hips Don’t Lie” certainly commanding attention for sure. It was her birthday Sunday (43) and I’m sure she couldn’t have imagined a better place to be. One wag said that Shakira and JLo united the masses for 15 minutes. Bravo!

BEACH BOYS BROUHAHA —(Via LA Times) — Beach Boys founding members Brian Wilson and Al Jardine alerted fans Monday that they have no part in an appearance later this week by a version of the group fronted by cofounder Mike Love at a trophy-hunting convention where Donald Trump Jr. will be the keynote speaker.

Love’s touring edition of the Beach Boys, for which he holds the legal rights to the name, also includes longtime band member Bruce Johnston. They are slated to play tomorrow, Feb. 5, at the Safari Club International Convention in Reno, where hunting enthusiasts can arrange trips to hunt exotic animals. Trump Jr. and his brother, Eric, are longtime trophy-hunting supporters.

“This organization supports trophy hunting, which both Al and I are emphatically opposed to,” Wilson tweeted on Monday. “There’s nothing we can do personally to stop the show, so please join us in signing the petition” protesting the private event at Change.org.

As of early afternoon Monday, the petition had surpassed 60,000 signatures toward a stated goal of 75,000 signees.

The petition, started by Eduardo Goncalves and addressed to Beach Boys manager Elliott Lott, asks, “Wouldn’t it be nice if all the Beach Boys, stayed away from those who kill for fun?”

“We the undersigned,” the petition states, “pledge to stop buying or downloading all Beach Boys music, going to Beach Boys concerts, and purchasing any Beach Boys merchandise until the Beach Boys withdraw from the SCI Convention and publicly state their opposition to this sick ‘sport’ of killing animals for ‘fun.’”

A spokesman for Brother Records Inc., the Beach Boys’ management company, declined to comment on Monday.

Wilson’s tweets made it clear that Love holds legal authority to use the Beach Boys name for his touring group.

Love attended the inauguration of Donald Trump as president in 2017. “I understand there are so many factions and fractious things going on — the chips will fall where they may,” Love told Uncut magazine at that time. “But Donald Trump has never been anything but kind to us. We have known him for many a year. We’ve performed at some of his venues at fundraisers and so on.”

One of the Beach Boys’ most highly regarded albums is Pet Sounds, released in 1966 with a cover photo showing the band members feeding goats at a zoo.

Our colleague Roger Friedman posted a great (and, right on) story about the kerfuffle. Check it out here: https://www.showbiz411.com/2020/02/04/beach-boy-mike-love-confuses-surfin-safari-with-the-real-thing-group-founder-brian-wilson-urges-boycott-of-group-plan-to-play-hunting-convention .

GUN N’ ROSES REBORN —It doesn’t seem too long ago that the thought of any Guns N’ Roses tours — especially any involving Axl Rose and Slash together on stage — was little more than a dream.

But now, a few years after their reunion and massive Not In This Lifetime world tour, GnR is as viable a touring unit as any. And on Monday, the iconic rockers announced an epic 2020 tour that will bring their explosive live show to gigantic stadiums around the world.

Among the stops in this global quest will be the first-ever concert at SoFi Stadium in Los Angeles (the soon-to-be home of the NFL’s Rams and Chargers) and MetLife Stadium, home of the Jets and Giants.

SHORT TAKES —Monkee-Micky Dolenz begins his 2020 tour this Saturday, in Tucson -with the Tucson Symphony Orchestra- (where Tucson-based celebrity-author Mark Bego will be on hand) and runs through to March 28 in del Ray Beach, Florida; and, then reprises his Mike & Micky tour with Michael Nesmith in April. Here’s a great write up on Dolenz from Tucson Lifestyle:  https://www.tucsonlifestyle.com/hey-hey-hes-a-monkee/ … Romeo Delight will be back at Daryl’s House on Saturday, June 27 …

Swiss-born Adriana Kaegi was a Coconut in the legendary Kid Creole & The Coconuts. She was married to Kid Creole himself for a time and even had her own group Boomerang. Now, she’s re-invented herself as Addy Media-a creative house covering all facets of video content and video publishing, sizzle reels, and brand marketing. She was a guest at Wendy Stuart Kaplan’s BDay two weeks back at Bedlam and starting this week, will be on-hand for New York Fashion Week. Thanks to Dahlia Weinstein for the photo of Adriana …