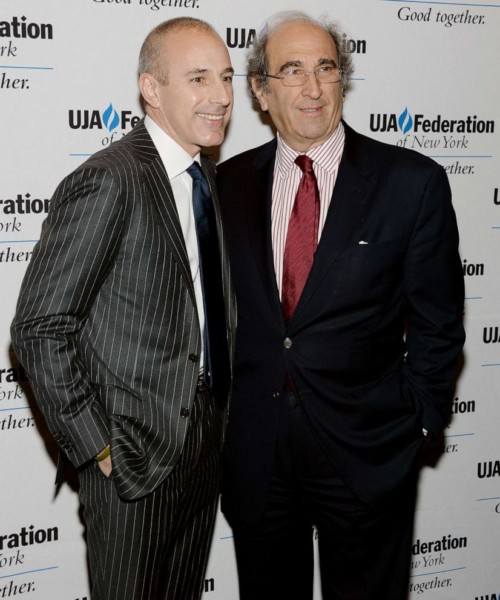 NBC’S LACK GONE —- (Via Showbiz 411) Andy Lack is out as head of NBC. He’s been there since 2015 and was widely thought to have protected Matt Lauer during his downfall.

Lack was seen as lacking in many areas, not the least of which was directing the company out of the MeToo scandals. He will be gone at the end of the month if not sooner.

The new chairman of NBC is Cesar Conde, 46, the head of Telemundo. He will be in charge of NBC, MSNBC, and CNBC. NBC News president Noah Oppenheim and MSNBC president Phil Griffin will both report to Conde. Mark Lazarus will be in charge of the company’s entertainment properties, as well as its new streaming service Peacock.

The end of Andy Lack is not only connected to Matt Lauer, but also to the whole Ronan Farrow episode regarding Harvey Weinstein. Farrow — as he’s told us over and over– was working on his investigation of Weinstein, but Lack pulled the plug after a war among lawyers. Farrow took his piece to The New Yorker, and the rest is history. Standing up for the old guard did Lack in. It was a failure to see the writing was on the wall for the old regimes.

Conde represents the new generation. He came to Telemundo in 2013 after a 10-year run at Univision, where he turned that company into an international player. He’s young, successful, and not white, which is going to be very important if NBC is going to evolve into a 21st century company. Conde will report to Jeff Shell, the head of NBC Universal, just recovering from corona virus and coming back strong with today’s announcements.

When the Matt Lauer incident(s) occurred, many thought that Lack would be gone immediately. He wasn’t. Though his steady hand wavered throughout, he actually survived the successful addition of Carson Daily and several other notable additions …. including, Craig Melvin too.

I can’t help but think of the network big-wig Fred Micklen (portrayed by Tom Irwin) on Apple TV’s Morning Show. The day Mitch Kessler was fired … Micklen’s days were numbered.

Will Lack surface at another network? Not with the Lauer-blemish upon him. Face it; NBC’s had troubles since Lauer left.

SCORPIONS — Scorpions’1991 hit “Wind of Change” will be eternally connected to the historic fall of the Berlin Wall. But the classic track was almost released without its distinctive whistling.

“Wind of Change” was the brainchild of singer Klaus Meine, who initially came up with the song’s tune during Scorpions’ 1989 performances in Russia.

“The second night that we played in Moscow, we were in the bus coming back from the gig, and Klaus was whistling ‘Wind of Change,’” Scorpions’ former manager, Doc McGhee, recalled to Rolling Stone. “He had this idea in his head. And then the next day he pretty much had the whole song written.”

In 1990, the group began work on its 11th LP, Crazy World. It was then that Meine presented “Wind of Change” to his bandmates. “Up to this point, I very rarely wrote music,” he said. “I focused more or less all those years on lyrics. But with ‘Wind of Change,’ I presented the whole song to the band.”

“It raised the hairs on my arms,” admitted the album’s producer, Keith Olsen. “I had a copy of the lyrics, and it was just, ‘Whoa.’ It was a very strong emotional statement. But it wasn’t a ya-ya-ya, rah-rah-rah political statement. It was so genuine.”

Initially, Meine’s whistling was provided simply as a guideline.

“The beginning melody, I guess I just whistled my way through it because I play guitar, but I’m not a lead guitarist,” the singer explained. “So I was just whistling, and it went down pretty cool.” While the rest of the band “liked the song,” Meine said “they were not so sure about this whistling part.”

Although the band was convinced to keep the whistling, its record label was not. “The record company came and said, “You know, guys, the song ‘Wind of Change,’ it’s great … but maybe you can cut the whistling out?’” Schenker recalled. “I remember that an A&R guy from Mercury Records in New York called me before that song was released in America,” Meine remembered in the book Wind of Change: The Scorpions Story, “and he said, ‘Klaus, I like that song a lot. But we have to take out that whistle. It won’t work in America.’”

“It was actually someone in my office who was talking to the record company, and the guys there were saying, ‘They gotta get the whistling out,’” McGhee explained. “I went, ‘You’re crazy! You can’t get the whistling out.’ It was just as much of a hook as anything in the song.

“So we said, ‘Fuck it! We keep the whistling,’” Schenker proclaimed.

For his part, Meine never understood why there was such a debate about the whistling. “It worked perfectly,” the singer said, noting that artists such as John Lennon and Axl Rose had already used whistling in their songs.

The stylistic decision paid off for Scorpions. “Wind of Change” became a global phenomenon, topping the charts in countries all over Europe, including Germany, France, the Netherlands and Norway. In the U.S., it peaked at No. 4 and became the band’s biggest hit.

SHORT TAKES — Broadway’s Donnie Kehr (Jersey Boys, The Who’s Tommy) has written and produced the song “New York City Strong” an anthem for the city’s First-responders and front-line workers during the COVID-19 crisis. Kehr also issued this week on social media, the NYC Strong-Video Challenge, where he asks New Yorkers to send a self-tape video singing the phrase “New York City Strong.” Adds Kehr, “We will then combine all the videos into one, and will be released world-wide on May 11th … The single will be available on iTunes and everywhere Friday May 11th …

Venice the band, from California, who dazzled two weeks back with their “Middle Age Lullaby,” on the All Together Now LA benefit, have a terrific new album entitled Jacaranda. Loving it. Check it out

… Guess who don’t sue: We’re still reeling from the news that a certain blonde-haired influencer, who split with her PR-person right before the pandemic officially hit, lost 4 (yes … 4) rather lucrative TV and cable show-opportunities. Amazing. According to the flack, he was going to let her know … but, has now decided against it. Retaliation I guess. Timing is everything … And, RIP A&M’s Bob Garcia.