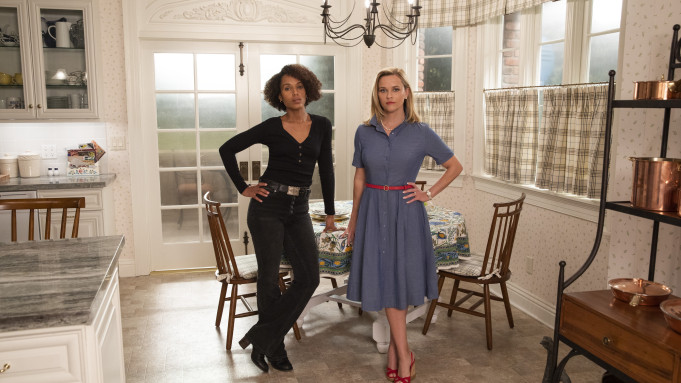 FIRES DOWN BELOW — I just finished Hulu’s first-run of Little Fires Everywhere, starring Reese Witherspoon and Kerry Washington, and have to say, although there were some great moments (two flashback episodes were exceptionally good) it was just a disturbing, exhausting series of events.

Based on Celeste Ng’s 2017 bestseller, Little Fires Everywhere follows the intertwined fates of the picture-perfect Richardson family and an enigmatic mother and daughter who upend their lives.

Starting with the show’s climatic event and working backwards, it’s interesting for sure, but, depressingly so. Witherspoon, who is definitely on a career-high, plays Elena Richardson, with just a bit of her entitled Big Little Lies-character and a dash of her character in The Morning Show.

Needless to say, TMS is her career high for sure, with Big Little Lies a close-second.

With Lies, she definitely seems to have captured the rich-white-woman persona, that’s immediately recognized, but a little sad.

In Fires, you sort of know how this slog is going to end up. I’ve been told that the 2017 novel was a big hit, but I hadn’t heard of it before.

Joshua Jackson, who was so brilliant in TV’s Fringe, is not given much to do, until the show’s later episodes, than explodes exhibiting his amazing abilities. He’s simply great in one scene where he finally calms down Elena to calm down. He doesn’t have to do, or say, much to get his point across. He’s the unsung star of the series.

Washington, playing a conflicted-artist with an affection for weed, is good, but again, with a mischievous snout, her character is decidedly nasty to her daughter… and, we do find out why.

With terrific production values, It wasn’t what I wanted it to be, but after Witherspoon’s two previous outing, the bar was set real, real high.

WEST HOLLYWOOD DISASTER — For 60 years, the historic club the Troubadour has anchored the western edge of West Hollywood with live music. A perennial presence in Los Angeles live music since the beatnik era, the club opened by Doug Weston has provided thousands of artists the opportunity to make magic on hallowed ground.

But as Gov. Gavin Newsom was recently laying out the stages by which businesses may be able to re-open, Christine Karayan, the club’s current general manager (Weston has long passed), realized the seeming futility of the Troubadour’s plight. Newsom has announced that music venues will be among the last to open, in Phase 4.

“That means the middle to the end of next year to potentially open, and maybe a 25% cap” on crowd size, Karayan says. “I can’t foresee being able to ride this out like that.”

A rustic general admission room with a small balcony and an upstairs VIP area, the 500-capacity club’s selling point has long been its intimacy. Save a few pesky support beams, there’s not a bad spot in the place. A folk and blues venue to start, in the mid-1960’s it started adding rock, jazz and pop acts that included rising artists such as the Byrds, Lee Hazlewood, Nina Simone and Judy Collins. It served as a crucial early comedy platform for Richard Pryor, Steve Martin and the Smothers Brothers.

Though it’s a tourist destination, its location just south of the Sunset Strip has made it a kind of neighborhood spot for musically minded Hollywood Hills, Beverly Hills and Hollywood residents.

Starting in the late 60’s, the Troubadour helped guide artists including Joni Mitchell, Linda Ronstadt, Jackson Browne, James Taylor, Tom Waits, the Eagles (who actually began at Dan Tana’s down the road) and Warren Zevon into the mainstream. Most famously, it was on the Troubadour’s stage in 1970 that a 20-year-old Elton John, across a series of shows, became a household name. That moment was captured in the recent John biopic, Rocketman.

“My whole life came alive that night, musically, emotionally… everything,” Elton John told the LA Times a few decades after those auspicious performances. “It was like everything I had been waiting for suddenly happened…. I could tell it was a magical night from the moment I stepped onstage.”

In the decades since, the Troubadour has remained defiantly independent. As other clubs shuttered or made booking arrangements with moneyed promoters such as Live Nation and AEG, the Troubadour has charted its own course — and continued booking standing-room-only gigs. “My last four talent buyers, actually, have all gone to Live Nation,” Karayan says with a fatalistic chuckle. “I’m the training ground, apparently.”

Outsiders commonly think of the Troubadour as a folk and singer-songwriter venue, but across the decades it has adapted and evolved. In the ‘80s, as heavy metal ripped through Southern California, the Troubadour served as a stage for early gigs by Slayer, Metallica and Motley Crue. In the 1990’s and 00’s, the club hosted Brit pop, grunge and alt-rock: Foo Fighters, Queens of the Stone Age, Melvins, Dave Matthews, the White Stripes, Bon Iver and Weezer all played beneath the club’s iconic neon sign on their ascents to main stages.

The Troubadour brand in Los Angeles is so embedded into music culture that many fans misunderstand the mechanics of the club, Karayan says. Describing it as “a little bit forgotten,” Karayan says, “We’re lumped in with the big boys, and we’re not the big boys.

Karayan’s father, Ed Karayan, owns both the club and the building that it’s housed in. He’s been sole caretaker since his former business partner Weston died in 1999. The club leases neighboring offices and storage space at market value, and insurance premiums are exorbitant.

Listing the costs, Karayan pauses. “The more I think about it, it’s just completely futile. At least a big seated venue has space where they can keep people apart. But I don’t know how that works for a general admission venue. Are you going to stop them from using the restroom?”

Like most proprietors, at first Karayan figured that the pandemic would prompt some temporary belt-tightening. She remembers her mind set: “At first, it was, ‘What is happening?’ And then we started canceling shows.”

The last gig was Glass Animals on March 11. YouTube videos show the band’s singer, Dave Bayley, singing from up in the balcony before moving his way through the VIP area and back onto stage. The place was packed. The next day, doom set in, Karayan says. “When we walked into the office on March 12, I thought, ‘Something horribly wrong is coming our way.’” So she decided to cancel shows through May. “And then it just started unraveling.”

When she read a month ago that Live Nation and AEG were predicting a fall 2020 reopening, Karayan was relieved. “I was like, ‘We can do that. We probably won’t have concerts until the end of the year, but it’s OK.” But, she adds, “Now its like, ‘Oh, I’m sorry. We’re talking, potentially, the middle of next year.’”

As an active member of the National Independent Venue Assn., she’s communicating with its 800 affiliates about lobbying for government aid. She says that many have expressed doubt that they’ll be able to survive an extended closure without immediate help.

Like many businesses, the Troubadour set up a GoFundMe page to help its 20 hourly employees, some of whom have worked at the club for decades, meet their needs. All but three have been laid off. To date, the campaign has raised $11,400 of its $30,000 goal. But that was a stopgap measure, and Karayan said the club will soon be raising its goal to underscore the urgency. It’s one of the only remaining options.

“It looks tacky, but it’s a reality at this point. It’s not a joke,” she says. “If we’re going to survive this thing — and that’s a big if — we’re going to need all the help we can get, from any direction we can get it.”

Whether that aid comes from one of the many multi-millionaires who owe their fortunes, in part, to momentous gigs at the Troubadour, or through the thousands of fans with once-in-a-lifetime memories, response to the Troubadour’s ask will likely determine whether that Glass Animals gig was the last show at the club.

“We know there’s going to be a huge fatality rate as far as how many venues will not be able to open again when/if this thing ever ends,” Karayan has concluded. “We’re just looking to survive, like everybody else.”

SHORT TAKES — Interesting headline from AP: Broadway considers the path forward for shows to go on by AP’s John Carucci and Mark Kennedy-Insiders say tickets will need to be deeply discounted to attract wary customers when Broadway reopens, and that means theaters will need to be full. … The shows with the best shot of survival will probably have to be both popular and offer attractive sale prices. Broadway will also have to depend more on New Yorkers, since tourism accounted for 65% of sales during the 2018–2019 season and the number of city visitors will likely dip … Micky Dolenz interviewed by Ageist’s David Stewart for a feature profile …

Mark Bego tipped us off to Netflix’s Hollywood-opus, helmed by the always-awesome Ryan Murphy. We love it and lead Dylan McDermott (as Ernie West) is sensational. He’s been in dozens of pilots and movies, but this is his shining moment … PR-pasha David Salidor called to say there could be a retrospective of legendary dance club Danceteria coming up. Stay tuned …

It took me a while, but I finally caught the HBO Phil Spector film-doc top lining Al Pacino and Helen Mirren. Definitively a fan of Spector and of the Mark Ribowski book on Spector and directed David Mamet, it’s a deep dive into the clearly surrealistic world of Spector. Mirren as his lawyer comes into the picture right after the shooting of would-be actress Lana Clarkson. As is his want, Mamet explores both sides and certainly explores the fact that if Spector did indeed shoot the actress, why was the no blood splatter on him. There’s the famous John Lennon-shooting-in-the-studio, where Lennon’s hearing was definitely affected and other famous moments dropped here and there. Ultimately, Jeffrey Tambor (as lawyer Bruce Cutler) predicted he’d get convicted because he’s a freak. The first trial was declared a mistrial and Spector walked. The second trial … not so lucky. Intense for sure … moody, very atmospheric, it wasn’t a big hit, but Pacino is a hoot as Spector; in various wigs, glasses, and dress … Happy BDay Rich Dart and RIP Sweet Pea Atkinson; Florian Schneider and Gem Spa!

G. H. HARDINGJanuary 16, 2023
Read More
Scroll for more
Tap
Looking For Podcasts That Will Keep You On The Edge Of Your Seat? – Look No More
How Are We Coping With Self Isolation: Insight From Around the Country And The World With Brian Hester