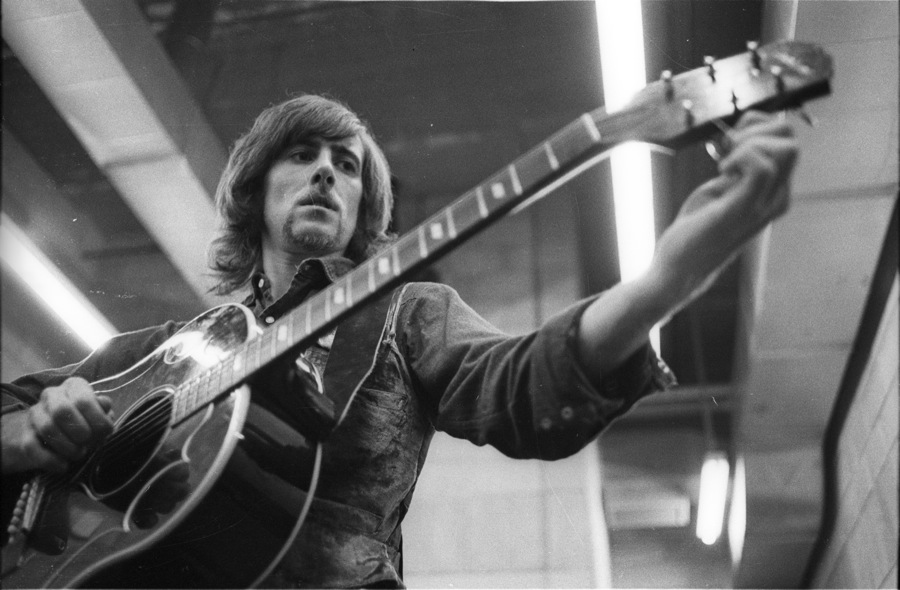 LAUREL CANYON DEBUTS MAY 31 — (via Best Classic Bands) – The two-part documentary series, Laurel Canyon, will premiere this month, May 31, on EPIX. As the riveting film unfolds, it explores the lives and evolution of the musicians – the Byrds, Buffalo Springfield, the Mamas and the Papas, Crosby, Stills, Nash & Young, Joni Mitchell, Linda Ronstadt, the Doors, Jackson Browne, Eagles, and many more – who inhabited that unique part of the Los Angeles music scene. Through rare and newly unearthed footage and audio recordings, the documentary features an intimate portrait of the artists who created a music revolution of the 60’s and 70’s that would change popular culture.

Alison Ellwood (History of the Eagles) directed it. Part one will premiere May 31 at 10 p.m. on EPIX. Part two airs one week later, on June 7.

One of the film’s frequent interview subjects is the well-known photographer, Henry Diltz, who became close with many of the era’s stars and documented it with countless images, scores of which are used in the film to great effect. He shares, in significant detail, his first-hand accounts of the artists he befriended and the iconic events he documented.

Early in the film, Diltz says, “I made a list of everyone I could think of that I photographed in Laurel Canyon,” as his shots of such figures as Mama Cass, Micky Dolenz, Jackson Browne, David Crosby, and more, are shown. “Lot of people.”

The producers also crowd-sourced fans’ personal film footage, photos and other materials that feature artists in the Canyon, the Sunset Strip and other area locales.

Laurel Canyon features all-new, original interviews with many of the legendary artists. It all unfolds beautifully, taking the viewer back to that fertile music scene.

“We were at the very center of this bubble of creativity and friendship,” says Graham Nash.

“[My home] turned out to be a gathering place,” says Dolenz. “We began to throw these soirees along with a ping-pong tournament. Up the street were the Turtles. Zappa was a little further down. It was a very small community of musicians and long-haired weirdos.”

The enclave and its unique geography were also part of what made it special. “It was so magical,” says Chris Hillman, who moved there in 1965. “Literally within four or five minutes you could be down on the Sunset Strip into Hollywood.”

“Once you got above 20 or 30 of us living there,” says his Byrds bandmate, David Crosby, “it was kind of a community. We would go around and visit one another quite a bit.”

The film pinpoints many moments that changed the face of popular music.

When the Byrds drastically reinterpreted Bob Dylan’s acoustic “Mr. Tambourine Man” in 1965, with a much richer version, filled with harmonies and jangly guitar, the public embraced the song, sending it to #1 on the Hot 100.

“[Dylan] loved what we did,” says Hillman.

The Byrds were regulars at Ciro’s, a nightclub in West Hollywood. Roger McGuinn recalls, “I remember Bob came and said, ‘Wow, you can dance to it!’ He got on stage with us.”

“The next day,” says Crosby, “everyone in town was talking about us. All of a sudden, people were lining up. It was every kid’s dream.”

“When I heard that electric version of this song, it inspired me to go to California to start a band,” says Richie Furay.

“We were creative people,” says Furay. “We were young. We were ambitious. The spectrum we covered was incredible.”

Much of the community’s musical output is featured in some marvelous footage and through the neighborhood’s legendary soundtrack: The Turtles’ “Happy Together,” the Mamas and the Papas’ “Creeque Alley,” and, the Doors’ “Break on Through.”

Interviews with Furay, the Monkees’ Dolenz and Mike Nesmith, and Stills himself, explain the genesis of the latter’s “For What It’s Worth,” which stemmed from the clashes between teenagers on the Sunset Strip and police, that took place in 1966. “I get home, pick up an acoustic guitar, and all of a sudden it turns into a song,” says Stills.

When they performed the song at 1967’s Monterey Pop festival, they were joined on stage by David Crosby (but minus Neil Young). Watch them get introduced by Stills’ close friend, Peter Tork

“It didn’t bother me that much at the time,” says Croz’s bandmate, Chris Hillman. Several months later, though, Crosby and the Byrds parted ways.

Later that year, Crosby was selected to produce the debut album from a new singer-songwriter, known to everyone by her middle name, Joan.

Within two years, the performer, now known professionally as Joni Mitchell, was a significant star, and had settled into a bungalow in Laurel Canyon.

Diltz was hired by her management to photograph her for the 1970 album, Ladies of the Canyon. As he approached her house with his partner, Gary Burden, “[Joni] was leaning in the window waiting for us. Luckily Gary got into a conversation with her which allowed me… to just keep clicking away while she was talking.” The landmark LP included “The Circle Game,” “Big Yellow Taxi,” and “Woodstock.”

One of the pivotal figures in the Laurel Canyon landscape and in the documentary is Cass Elliot. “She saw herself as a hip Barbra Streisand,” says Michelle Phillips of the Mamas & the Papas. “Her house was at the center of everything, open twenty four hours a day [with] a very wide circle of friends.”

“Cass loved introducing people,” Henry Diltz adds. “She was always on TV programs. Once it was Cream and she invited Eric Clapton to her home. She called me and said ‘I’m having some friends over. Come on up.’ David Crosby brought Joni and said to her, ‘Play us a tune,’ so she sang the entire album!

“Clapton was staring at her fingers. This legendary guitarist had never seen that [style of playing] before!”

Part two of the documentary includes extended segments on historic events that unfolded in 1969 and 1970 that took place well beyond the scope of what was going on in Laurel Canyon. Two occurred within weeks of each other in August 1969: the murders by the Manson family, and Woodstock.

“We were in this beautiful bubble,” says Graham Nash. “Those murders put a pin right in that bubble and it exploded. It was too close, too real.”

At the time, Diltz was already in Bethel, New York, preparing to shoot the 1969 Woodstock Music & Art Fair. “My friend, Chip Monck [the lighting designer who would double as the festival’s primary PA announcer] introduced me to Michael Lang. He sent me a round-trip plane ticket on TWA and $500 to shoot the festival.

“I had the Golden Pass from the producer and stayed on stage with the best seat in the house.”

Part two also introduces us to several members of the so-called “second generation” of Laurel Canyon musicians including Linda Ronstadt.

She had recorded the 1967 hit, “Different Drum,” with her band the Stone Poneys. Diltz adds, “She was on the scene, one of the gang. No airs. We all loved her.” He recalls another unique quality. “She was always barefoot. Even on stage.”

As a solo artist, her first singles stalled on the chart. That all changed with her cover of “You’re No Good,” which reached #1 in 1975.

“Every songwriter wanted to get something to her,” says her early producer and manager, John Boylan. “She took over those songs.”

Jackson Browne was another prominent member of the “second wave.”

“I was writing songs and playing open mic night at the Troubadour,” he says. Browne was introduced to the artist management team of David Geffen and Elliot Roberts. “We knew songs, and we knew artists. But we couldn’t get a deal for Jackson,” says Roberts. “No one wanted him. So we started our own [label, Asylum Records] for artists that we think are great.”

Browne’s debut album and lead single, “Doctor My Eyes,” became big successes when they were released in 1972. “Jackson was a mentor to all of us because he had broken through first,” says one of his friends, a singing drummer. “We all aspired to write like that.”

His voice and his words and his melodies,” Diltz tells us. “That plaintive, yearning voice. It just kills me.”

When Glenn Frey and J.D. Souther dissolved their group, Longbranch Pennywhistle, Frey took advantage of an offer from Ronstadt to join her touring band. “I told Glenn he was a hotshot and he was going to do something someday,” she says.

At around the same time, she and Boylan saw a band called Shiloh perform. Impressed with their singing drummer, they invited Don Henley to audition for her band. The two new members discovered they were kindred spirits.

“[Glenn] had this very detailed plan of this band he wanted to start,” says Henley. “After we got back from Linda’s tour, we started the recruitment process.” The pair were soon joined by Bernie Leadon and Randy Meisner to form the Eagles.

The first single from their 1972 self-titled album was “Take it Easy,” a song that Browne had been unable to finish. Frey presented some initial suggestions and the pair collaborated on completing the lyrics.

With three hit singles, the Eagles debut was a big success. They followed it up with a concept album centered around the Old West, which lacked a pop hit. Enter Ronstadt, who recorded one of the album’s Henley-Frey compositions for her own 1973 LP.

“‘Desperado’ wasn’t a hit for us until Linda recorded it,” says Henley. “She gave it wings.” It became one of the band’s signature songs.

“The whole California country rock thing exploded with Crosby, Stills, Nash and Young, Poco, Linda, Jackson Browne, and the Flying Burrito Brothers,” says Boylan. “But the Eagles took that to the next level. It was the dominant musical format of the 70’s in this country.”

The series is not associated with 2019’s documentary Echo in the Canyon, which took a different approach to explore the same, fertile 60’s music scene. Music fans will find Laurel Canyon to be worth the wait.

I’ve seen the entire program and really enjoyed it. The Echos In The Canyon docu completely missed Joni Mitrchell, which to me was a crucial error. How could you do a documentary about Laurel Canyon and leave out Joni?

Part one perfectly gets the essence. Dolenz lived up the canyon from Frank Zappa (who definitely deserved a lot  more screen time) and next to Alice Cooper. Me, I would have loved to have heard more about that! Like how Dolenz was asked to join Zappa’s Mothers Of Invention, or how Alice used to babysit for Dolenz’s daughter.

Part two is a bit more Eagles-driven, but is a strong presentation. Must-see viewing for sure. Watch the trailer here

SHORT TAKES — Brilliant article from Deadline’s Pete Hammond on the future of live premieres and events. Read it here: https://deadline.com/2020/05/premieres-red-carpets-oscar-emmy-campaigning-new-normal-1202941922/ … Bob Dylan turned 79 Sunday. On the even of his first new album in years (Rough And Rowdy Ways) our colleague Roger Friedman gave a wonderful tribute to a rare 1969 gospel album he did with Merry Clayton. Check out here: https://www.showbiz411.com/2020/05/24/happy-79th-birthday-bob-dylan-flashback-to-a-rare-1969-gospel-album-of-dylan-songs-featuring-the-great-merry-clayton … And, I personally had my first night out – dinner with 2 friends – in weeks! Amazing night for sure!