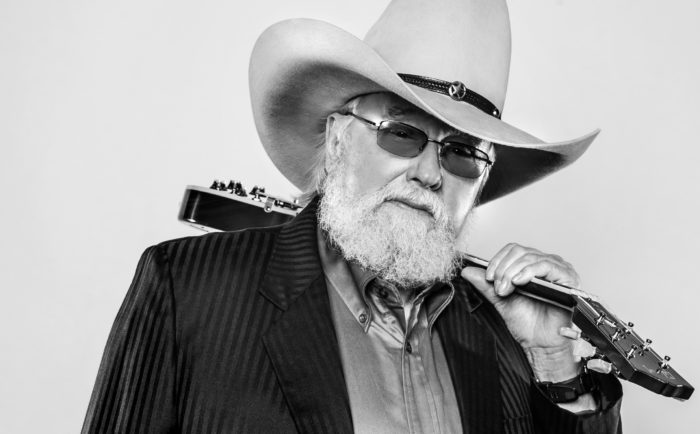 Daniels was a member of the Country Music Hall of Fame, and his best known recording was his 1979 single “The Devil Went Down To Georgia,” which was released with The Charlie Daniels Band.

Born in Wilmington, N.C. in 1936, Daniels grew up listening to Pentecostal gospel music, bluegrass and country. In the mid-to-late-1960’s, he worked as a session musician in Nashville. During that time, he played on three Bob Dylan albums (providing guitar and electric bass work), as well as playing fiddle on the Marshall Tucker Band’s early albums.

In 1973, Daniels reached number 9 on the Billboard Hot 100 with the novelty song “Uneasy Rider.” Two years later, he would reach the top 30 (with The Charlie Daniels Band) with “The South’s Gonna Do It Again.” Finally, in 1979, he reached number 3 on the charts with the aforementioned “The Devil Went Down To Georgia,” which also earned Daniels a Grammy Award for Best Country Vocal Performance.

In 2008, Daniels was inducted into the Grand Ole Opry, and in 2016, he became a member of the Country Music Hall of Fame.

“Charlie Daniels was a reverential innovator. He was a fiddle-playing bandleader, like King of Country Music Roy Acuff. His music fused the immediacy of Southern Rock with the classic country storytelling that he heard as a child in Wilmington, North Carolina,” said Kyle Young the CEO of the Country Music Hall of Fame and Museum . “He brought new audiences to country music, pointing people to the sources even as he explored the edges. He was also a delight to be around, always with wife Hazel at his side. Just as fiddler Johnny did in the famous song, Charlie Daniels beat the Devil.”

Daniels is survived by his wife, Hazel, and son Charlie Daniels Jr.

Never met him, but always enjoyed his antics and presence. He played on the Ringo Starr Beaucoup of Blues and from what I hear, was the last to leave a venue. Sad for sure.

NICK CORDERO — Another sad, sad ending here. 95 days in the hospital; relentless support from his wife Amanda and all the Broadway community. Just downright bad all around. I loved Nick’s work and met him briefly at Donnie Kehr’s Rockers On Broadway last year and he was a shinning star.

THE MAESTRO— Ennio Morricone, one of the world’s best-known and most prolific composers of film scores notably for spaghetti westerns, died in Rome on Monday at the age of 91.

Tributes poured in for the man who composed the music for about 500 films, including his old childhood friend Sergio Leone’s 1966 epic The Good, the Bad and the Ugly and Quentin Tarantino’s The Hateful Eight for which he finally won an Oscar in 2016.

Morricone died in hospital where he was being treated for a fractured femur following a fall, according to a statement from lawyer and family friend Giorgio Assuma.

Ennio Morricone “passed away in the early hours of July 6 with the comfort of his faith”, the statement said.

He remained “fully lucid and with great dignity right until the end,” it added.

Tributes began pouring in for the maestro soon after his death was announced.

“He made us dream, he moved us and made us think, writing unforgettable notes that will remain forever in the history of music and cinema,” he said on Twitter.

Italian film actress Monica Bellucci said that “there are people who have the ability to make the world better because they know how to create beauty,” while Gilles Jacob, the former head of the Cannes film festival, described him as the “emperor” of film music.

Famed Italian conductor Riccardo Muti called Morricone “a master for whom I nurtured friendship and admiration,” describing him as an “extraordinary musician” who could jump with ease from film scores to classical music.

Born on November 10, 1928, Morricone began composing at the tender age of six, and at just 10 he enrolled in trumpet school at the prestigious Saint-Cecilia conservatory in Rome.

He played in jazz bands throughout the 1940’s before beginning to ghost write for film and theater.

Born on November 10, 1928, Morricone began composing at the tender age of six, and at just 10 he enrolled in trumpet school at the prestigious Saint-Cecilia conservatory in Rome.

In 1961, at the age of 33, he collaborated with director Luciano Salce in Mission Ultra-secrete before going on to gain fame with the score for A Fistful of Dollars starring Clint Eastwood in 1964.

Before winning the elusive Oscar for best film score at age 87 in 2016, the Rome-born son of a trumpeter had been nominated no fewer than five times. The Academy of Motion Picture Arts and Sciences — embarrassed that such a talent had not been recognized sooner — presented him with a lifetime achievement award in 2007.

Although he is most closely associated in the public mind with Leone’s westerns starring Eastwood, Morricone’s composition for Roland Joffe’s Jesuit drama The Mission is considered by many critics to be his cinematic masterpiece, an epic and eclectic reflection of South America’s musical melting pot.

Throughout his career, Morricone worked with some of Hollywood’s most acclaimed filmmakers as well as arthouse directors. After his collaboration with Leone, he worked with Italian screen legends Federico Fellini and Pier Paolo Pasolini and later with the likes of Pedro Almodovar, Bernardo Bertolucci, Brian De Palma and Oliver Stone.

Lawyer Assuma read a final statement from Morricone outside the Rome hospital where he died, La Republica reported.

“There’s only one reason why I want to say goodbye like this and have a private funeral — I don’t want to bother anyone,” read the statement, which went on to express his love for his friends and family.

Congrats to Brad LeBeau of Pro Motion on his company’s 37th anniversary … HBO’s Perry Mason seems to be growing on me. Its third episode unspooled Sunday and even though it’s still somewhat unclear what’s going on, it is moving towards a resolution of some sort. I can’t think of another re-booted series that has endured such cataclysmic reviews, with some reviewers calling it a  modern-day classic, while others lament it as a travesty. Honestly, after all the plaudits universally for their Succession; this reaction must be a revelation over at HBO … After some early false-starts, Hollywood is really (and, I do mean really) cornered about when they can really get back to business. Mandy Moore, on the Today Show  Monday, said that the This Is Us cast usually goes back to work right after July 4. Not this year for sure. Zoom is great, but because everyone has a somewhat different internet speed … those annoying false starts and frozen moments happen all the time … Ringo Starr turned 80 Tuesday … At 87, Yoko Ono is in fragile health. She’s in a wheelchair and confined to her home at the Dakota in NYC … Check out the trailer for the forthcoming documentary on the splendid Gordon Lightfoot, If You Could Read My Mind:

and, still no word from Macmillan’s Molly Ellis. Hello Molly?