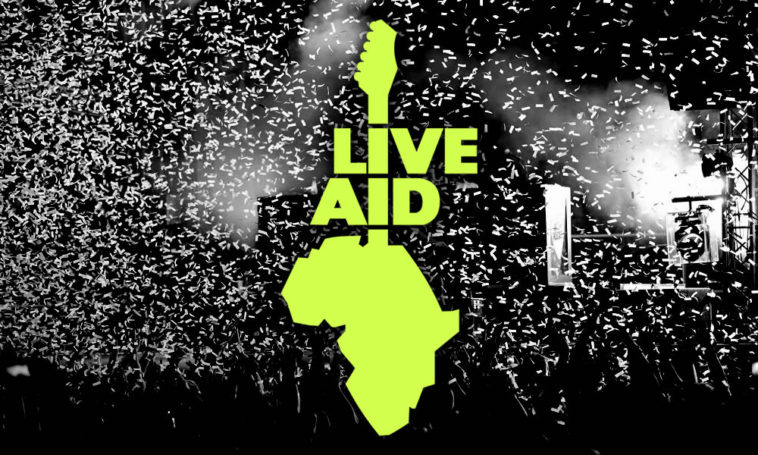 LIVE AID AT 35 — Can’t quite believe Monday was 35 years since Live Aid at JFK Stadium in Philadelphia. I was there and it was simply a wondrous time on all fronts. I drove down there with producer Joel Diamond and two others and as we approached the stadium, there were just tons of people lining up. It was a true musical event. Unprecedented for sure!

We parted company once we entered, as we had different seats, but I sat stage right and the view was just sensational.

It was an amazingly well behaved crowd on a sweltering Philly-day; the air was filled with good cheer as the SRO crowd was terrifically well behaved and if you watched the event, at one point, they literally began to hose down the crowd. Well, believe it or not, we were one or two rows removed from where they stopped watering the crowd. Truth be told, I well recall that when the water stopped, I was a tad disappointed. It was that hot!

As a die-hard music fan, each act was just splendid, but Eric Clapton to me, was just stellar. As I’ve remarked over the years, that when Eric and band (with the stellar Chris Stainton on keys) did “Layla,” it was decidedly much faster than the original recording. Clapton said himself, that when he stepped up to the microphone and grabbed it, he immediately got a massive electrical shock. Whether that had anything to do with the speed we’ll never know. He was just sensational; with the late Donald ‘Duck’ Dunn on bass.

Hometown heroes Hall & Oates were superb as well; Hall as good as I’ve ever seen him; just seeing Bob Dylan was amazing, though it was not one of his best remembered performances. Tina Turner with Mick Jagger was awesome and watching Phil Collins, who had just jetted in on the Concorde from the London-event, was amazing. He did join Clapton and was just captivating.

I don’t remember how long the Philly-show was, but I can tell you I was physically exhausted by the end. Wisely, I had made hotel reservations and we walked to the hotel. I can’t say how long we walked, but it was not a sprint. Talking with the other concert-goers along the way was great too. We actually stopped and got some food (hoagies!) and ate them in bed, freshly showered and thoroughly exhausted. Just a wonderful day and evening.

PR-wizard Randy Alexander, then a scribe for the Trenton Times, remembers Live Aid’simpact this way:

“That’s a loaded question. As a concert event, it will never be repeated. And that’s a real shame, because we could sure use something like that once we finally get fully and completely back to the other side of normal – if that is indeed possible.”

“The global awareness, to rock for a cause, was truly unprecedented, and I think the cause itself, of feeding the world, was eventually overshadowed by the transcontinental gathering of so many pillars of classic rock. Thirty-five years on, many of those pillars are no longer with us, and the state of rock itself, has certainly lost its dominance amid a shaken foundation. The 80’s, to me, was the last great decade of superstar rock acts, before “alternative” and grunge kicked in and changed the game pre-Napster and the internet. And Live Aid brought together the best of the 60’s through the 80’s, speckled with one-time-only reunions of the likes of Black Sabbath, CSNY, and of course, Led Zep.”

“Joan Baez was right when she said ‘this is your Woodstock.’ And we’ve never been able to truly repeat Woodstock since, despite the sequels that devolved from ‘94 to ’99 resulting in an inability to do a 50th Anniversary edition last year, which is most telling about the state of the universe. So the lasting impact, I suppose, was that it was the last monstrous example, that rock had immense possibilities to heal the world. And tragically, that’s becoming more and more nostalgic Whether rock still has those possibilities or not is a whole ‘nother discussion.”

Alexander also agreed that the Jagger/Turner pairing was amazing: “A real tough one, but the electricity of Mick & Tina at the end of the night was undeniable. A glorious house quake that exploded deep into the darkness.”

I sure could use one of those days right now … along with everyone else.

FRAMPTON LIVE — Peter Frampton has teamed up with former Rolling Stone editor Alan Light for a memoir, Do You Feel Like I Do?, set for release on October 20th.

“This is my journey,” Frampton says in a statement. “All I ever wanted to do was play guitar and it’s taken me many different places – physically and mentally. I’ve been to the moon and back without a rocket, but also to the depths of despair. You never stop paying your dues. Failure has been my greatest inspiration. I brush myself off and then I want to ‘do it again.’ Do You Feel Like I Do?”

According to a press release, the book will touch upon his work with childhood friend David Bowie, his struggles with substance abuse, the “blessing and curse” of his breakthrough album Frampton Comes Alive! and the inflammatory muscle disease that is threatening to end his career as a live performer.

“Peppered throughout his narrative is the story of his favorite guitar, which he thought he’d lost in a plane crash in 1980,” reads a statement. “But in 2011, it mysteriously showed up again – saved from the wreckage. Frampton will tell of that unlikely reunion here in full for the first time, and it is emblematic of his life and career as a legendary artist.”

Last year, Frampton launched a farewell tour after announcing he’d been diagnosed with Inclusion-Body Myositis. “If I’m going to do a farewell tour, I want to play good,” he told Rolling Stone. “I want to rock it. I know that this tour, I will be able to do everything I did last year and the year before. That’s the most important thing to me. I want to go out screaming as opposed to, ‘He can’t play anymore.’”

Two Frampton tidbits: First. I hope he discusses manager Dee Anthony is the book. Sure, the music was superb and so is Frampton, but Anthony’s handling and packaging of Frampton’s talent made all the difference. I knew Anthony and his mantra of always leave the audience wanting more was right on the money.

Second. Frampton’s version of “While My Guitar Gently Weeps” is one of the best covers … ever. Simply phenomenal.

HANKS ON A GREYHOUND — After some minor trouble dialing up Apple TV+ (why oh why are these streaming services so difficult to get working?) we screened Tom Hanks’ Greyhound; which we really enjoyed.

Now, I don’t share the same fascination with WWII history that Hanks clearly does, even though I loved Saving Private Ryan (and, cannot for the life of me, turn it off when it’s on every other hour) and certainly applaud every thing Hanks has done. For me, WWII history is one tough pill to swallow.

This movie, which Hanks wrote, adapted from C.S. Forrester’s novel The Good Shepherd, briefly languishes in narrative hell in the opening moments. Hanks meeting up with his girlfriend, Elizabeth Shue, then being abruptly boarded onto the Greyhound escorting a convey of 37 ships through some real, dicey waters. One of which is called the Black Pitt!

Literally ten minutes into the movie, you’re on the high seas and there’s an immediate attack. It’s almost as if everyone involved knew, that they might as well get the facts immediately out the way and head straight towards the action-parts … as they’re that good.

The movie’s production – obviously shot against a green screen on a huge sound-stage – holds up.  There’s even a near collision with U-boat that you can practically feel. Director Araron Schneider has done a terrific job.

Hanks’ intensity shines through and he comes across as man of the people. Even when a porter, who brings him countless meals throughout the movie, is killed, you can sense his emotions. Many have said it before, but Hanks is every man for sure. I say go see it!

SHORT TAKES — Great response to the forthcoming Time Traveler; Vic Kastel’s album due out 7/31 on Island Avenue Records … Many pundits are wondering if Billie Eilish’s theme song for the next Bond-movie, No Time To Die, was a little tepid. The movie’s been pushed back twice and there’s still time for Adele to come in. Stay tuned … Still wondering whatever happened to Joanna Bonaro’s Good ‘n Screwed streaming-series. Needless to say, it would have been viewing for these shelter-in-place days … Look for Micky Dolenz’s forthcoming interview with Dr. Nancy Berk (Entertaining Insights). She just spoke to Tommy James and Justin Hayward from The Moody Blues … And, Happy Bday to Project Grand Slam’s Robert Miller; their new album East Side Sessions is out on July 31.

G. H. HARDINGSeptember 14, 2022
Read More
Scroll for more
Tap
One of T2C’s Recommendations For Best Musical Broadbend, Arkansas To Live Stream
What To Watch July 15th To Take Away The Blues