The Golden Apple: The Mincemeat Pie that Triggered the Trojan War

The Golden Apple: The Mincemeat Pie that Triggered the Trojan War 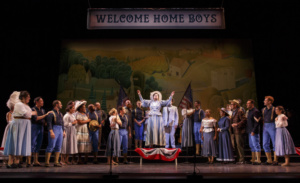 The Golden Apple, which debuted on Broadway at the Alvin Theatre back in 1954 was praised back then for its all American sound and passion (although it only ran for 125 performances). Steven Suskin (Show Tunes: The Songs, Shows, and Careers of Broadway’s Major Composers) wrote: “The Golden Apple benefits from imaginative theatricality in all departments but it was the more-than-glorious score that carried this brilliant musical theatre experiment from Off Broadway to the Alvin”.  The music, composed by Jerome Moross certainly is worthy of the praise. It’s powerful and electric, especially as presented here at New York City Center Encores! with their glorious orchestra lead by music director, Rob Berman (music coordinator:  Seymour Red Press; original orchestrations: Jerome Moross and Hershy Kay). It rolls and flows with a jazzy style and bluesy rhythms that pulse and floats through the crowd. And with this cast of stellar singers, it’s as beautifully sounding as one could hope. I felt grateful for the eclectic tastes of Encores! bringing us a musical that has not seen the the lights of Broadway since, nor, most likely, will it ever again. At least not without some big revisions.

It’s a strange piece of work to say the least, and doesn’t flow forward like a modern musical or even like those classics that are restaged time after time. Overall, it feels at moments as long and drawn out as the epic poems of Homer, namely the Iliad and Odyssey, that it was based upon. Writer John Latouche drops The Green Apple down into a fictional America that is immortalized by the better and more classic musical, Oklahoma. They envelope it with country folk dancing in the town square, a pie baking contest, a ladies’ sewing circle, and a hot air balloon that floats into town carrying a traveling salesman. There are returning heroes, three competitive bakers (Carrie Compere, Ashley Brown, Alli Mauzey), and a dooms-day preaching fortune teller named Mother Hare (N’Kenge). And the golden apple that gets the trouble started. 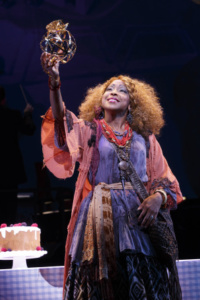 As Greek legend would have it, a golden apple was thrown into a ceremony by Eris, the goddess of discord, and claimed by three others: Hera, Athena, and Aphrodite because of the inscription that read “for/to the most beautiful”. Zeus, not wanting to get involved assigned the task to Paris of Troy so that it would be he that awarded the prize. As each goddess desperately wants the prize, they each offer Paris a gift as a bribe in return for the apple; Hera offers to make him the king of Europe and Asia (money), Athena offers him wisdom and skill in battle (smarts), and Aphrodite offers to give to him as a wife a most beautiful woman, Helen of Sparta, who is already married (sex). Paris chooses Helen, a decision that causes his own destruction and starts the Trojan War.

Center that story around a few pie making women at a contest in small town America, and it becomes crystal clear where the title is derived. With the glorious melodies transporting us from ancient Greece to the rural heartland of Angel’s Roost, on the edge of Mt. Olympus, where nothing much happens, as we are told by the delightful Helen. Played with a wonderful edge of mischief and feistiness by Lindsay Mendez (Significant Others, Dogfight), Helen sings of her boredom in the town in that first great song, but Act I and the beginning of Act II show the falseness of that claim. A tremendous amount happens to the wonderful townsfolk of Angel’s Roost. It’s fun and easygoing, like a good frolic through a field and a fun barn dance. It incorporates a band of returning soldiers, lead by the rich voiced Ulysses, played by the magnificent and handsome Ryan Silverman (Side Show, Chicago) who sings of his love for his faithful wife Penelope, a beautifully voiced Mikaela Bennett (making her professional stage debut) and their home with such power that we actually believe him. As does she. Until she sees otherwise. Ulysses will not be satisfied by the quiet town of Angel’s Roost. 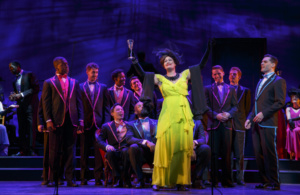 The other soldiers returning home from service in the Spanish-American war are mostly interested in another woman, the legendary vixen of adoration, the sexy Helen. Mendez makes us completely understand why men would do the things legend records them doing for this amazing woman. She’s playful and spontaneous, and with the clever line, “all right, my dear, you talked me into it”, to the ever-silent Paris, the handsome young man who floats into town in that balloon, we totally believe in her ability to be reckless and endearing all in the same moment. Her rendition of the famous (although not to me) ‘Lazy Afternoon‘ is as sultry and sexy as can be, sung with a sensual slowness to the ballet dancing Paris (Barton Cowperthwaite) who interestingly never utters a word. Her performance is not to be missed. 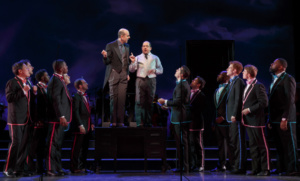 Helen runs away with Paris, and as the story goes, the soldiers must go and bring her back. It doest take much to incite these young men onto their next quest. So off they go. The big city is filled with foolish big city folk that, in some ways, comments very wisely on the easily duped masses of America (i.e. Trump voters). Ulysses manages, fairly easily, to get Helen to return to her husband back in quiet Angel’s Roost, in the chaotic ‘The Taking of Rhododendron’. But once Helen leaves the big city and returns home, the story starts to wear thin. As Ulysses and company are slowly ushered through the sins of the big city by the devilishly fun Hector Charybdis (a wonderfully soft shoe dancing Jason Kravits giving us a glorious Jimmy Durente-esque number, ‘Hector’s Song‘), the parade of vices start to weigh on our senses. I must admit I wanted the soldiers to be dispatched a bit more quickly, so we could return to Angel’s Roost, and catch up where we left off. I think I wanted to return home to Penelope and that glorious voice of Bennett much faster then Ulysses.  The numerous songs that happen after Helen leaves Rhododendron feel as long as his ten year absence; each named after a different hurdle that the original Ulysses survived; ‘Calypso’, ‘Scylla and Charybdis’, ‘Goona-Goona’, ‘Doomed, Doomed, Doomed’, ‘Circe’ to the final ‘Ulysses’ Soliloquy‘.  But once those trials are completed, and one by one the soldier boys disappear (which couldn’t happen fast enough if you ask me), we finally get the reunion we were waiting for. 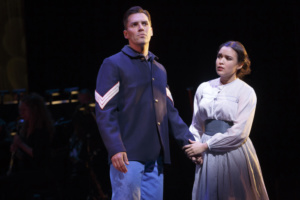 Reviewing an Encores! production is a bit of a challenge because in a way they aren’t meant to be taken in the same way as a fully staged Broadway musical revival.  Their shows are like entertainment mixed with a history lesson, and anyone who reads my blog knows, I love a good bit of theatre history.  To imagine the magnificent Kaye Ballard singing ‘Lazy Afternoon‘ back in 1954 as wonderfully as Mendez does here, is a wonderful experience and gift.  Us New Yorkers are lucky to have this glorious opportunity to see shows like The Golden Apple that would never work in today’s theatrical climate staged as wonderfully rich as this production at New York City Center Encores! It’s not a perfect show, and at times it feels as tedious as a lecture on Homer’s the Odyssey, but the magnificence of the vocal talent collected here to sing this rich music is a gift from the Gods, like that golden apple handed down from Zeus. But this time, I doubt it will cause a war.
So for more, go to frontmezzjunkies.com
Related ItemsAshley BrownBarton CowperthwaiteEncores!jerome morossjohn latoucheLindsay MendezNewNew York City CenterRossthe golden apple
Events