The Good Person of Szechwan – Good, not Great

The Good Person of Szechwan – Good, not Great 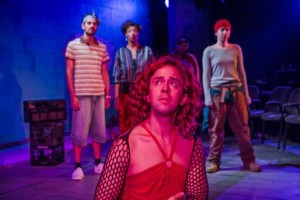 Racially and ethnically diverse casting is the highlight to the wildly uneven, The Good Person of Szechwan. Directed by Ernie Nolan and written by Tony Kushner from a translation of Bertolt Brecht work, with additional song lyrics taken from the poems and writings of Bertolt Brecht, Szechwan tells the story of a hooker with a heart of gold, but this is miles away from Julia Robert’s star making Pretty Woman. Originally performed in the 1940’s, Szechwan has been updated here with a modern back drop of poverty, cruelty and urban decay, that could easily double for almost any random street corner in South Chicago. The final show of Cor Theatre’s season, Szechwan concepts fits in perfectly within their array of sexually charged, edgy and daring productions. The dozen dwellers of this dizzying world, full of gender-fluid cross-dressers, streetwalkers, drug dealers and aspiring rappers, both connect and alienate the audience, which was my biggest issue with the piece.  Comedy? Drama? Cautionary tale? I am not certain what the true focus was intended to be. 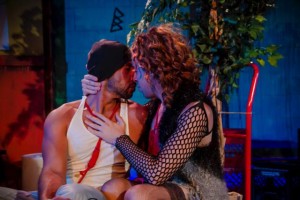 The story began with a triad of god’s (Jos N. Banks, Aida Delaz and Ben Chang) descending upon Earth with the complex task of finding just one good person who would be worthy of their heavenly protection.  They are taken in for the night by Shen Te (Will Von Vogt) the kind-hearted prostitute, who we comically initially meet, mid-trick. Rewarded for her kindness for letting them stay with her, the gods provide her a reward, a gift card with enough money to make a more honorable living, managing her own tobacco shop. Looked to me like trading one seemingly bad habit for another, but I digress. Within moments of her “good fortune” the residents of this seedy street corner  descend upon Shen Te like a cornucopia of self-serving locusts. Quickly taking advantage of her new fortune for their own personal gain, Shen Te morphs into Shui Ta, her domineering male cousin, who abruptly jettisons the troupe of freeloaders and interlopers. Returning to the role of streetwalker, Shen Te meets Sun (Chris Brickhouse) a down on his luck pilot. Proving to be an “an obstacle to my suicide” Sun and Shen Te quickly fall in love. Once again, Shen Te has her hopes dashed when Sun proves himself just another in a long line of opportunists. Inserting real world, modern-day audio clips of Hillary, Oprah, and Donald, the most telling snippet,  “if there are a lot of negative people in your life, don’t look at them.  Look at yourself.” 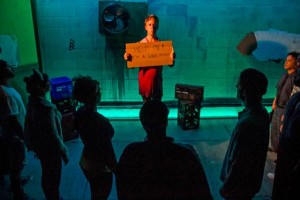 To break up the unfolding drama,  multiple inserted musical interludes, performed in a hip-hop format. Not a traditional musical, this is more a drama with music, featuring titles like “The song of St. Never-to-be” and “The song of a Mother’s Love.” The cast of Szechwan approaches this format with varying success. Dawn Bless as Wang the Waterseller and Jos N. Banks in his multiple roles, emerge entirely unscathed. Lea Pascal’s Jersey whiner and  Jeri Marshall’s Jamaican nosey neighbor are also cast highlights. But with lyrics like “listening to the words of an ordinary whore” and you will not find yourself clamoring for a cast soundtrack as show’s end.  The hip-hop rants land left of center and are mostly forgettable about an hour after you have heard them. 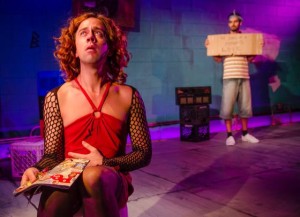 With The Good Person of Szechwan, the gender neutral casting of a do-gooder done wrong, had such potential, only I found the conclusion unfocused and ultimately unsatisfying. Sometimes the bigger the risk, the bigger the reward. I feel this production’s concept really is at fundamental heart of most of Cor Theatre’s risqué productions. For the fleeting moments of laughter and poignant drama on display in Szechwan, you ultimately remember the individual line of the scene, not the entire piece. To continue the analogy, the memorable moments here are definitely just trees, a forest is not fully crafted. Alarie Hammock’s costume design, Matt Reich’s lighting and Tony Buzutto’s violence choreography all deserve mentioning.  Cor Theatre’s The Good Person of Szechwan is a jagged and uneasy as its residents. An intimate look at those normally cast aside from society, but to deserve the audience’s attention for 2 hours, this needed to be great, not just Good.

Cor Theatre’s The Good Person of Szechwan is now playing at A Red Orchid Theatre through September 11, 2016

RossJanuary 2, 2023
Read More
Scroll for more
Tap
Aisle Say On The Square: When No Words Speak Volumes And Too Many Can’t Say Enough
Broadway Gets a Pick Me Up In November With Kristin Chenoweth