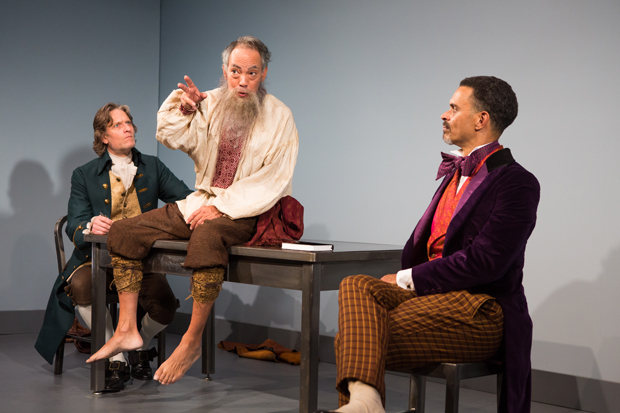 The Gospel According to Thomas Jefferson, Charles Dickens and Count Leo Tolstoy: Discord – Open That Door!

The Gospel According to Thomas Jefferson, Charles Dickens and Count Leo Tolstoy: Discord – Open That Door! 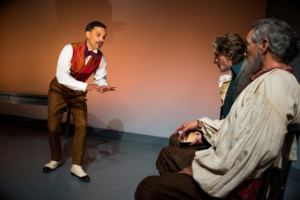 “In the beginning”…Scott Carter, the playwright of the new play at Primary Stages at the Cherry Lane Theatre with the longest title of the season, The Gospel According to Thomas Jefferson, Charles Dickens and Count Leo Tolstoy: Discord, had an idea. Carter (executive producer and writer for “Real Time With Bill Maher“) wanted to explore religion and spirituality using the self curated Gospels of these three great men as a catalyst for this spiritual journey. A reckoning and questioning of the status quo and the bold truth through their eyes, and Carter sure knows how to pontificate on the subject of Jesus and the history surrounding these three famous gentleman. He has so much to say apparently, but sadly, takes far too much time getting to the point. So let me try to do quite the opposite.

One at a time, Thomas Jefferson (1743-1826), Charles Dickens (1812-1870), and Count Leo Tolstoy (1828-1910) find themselves coming through a door into a very plain room that reeks of purgatory and a surreal dimension.  It’s brightly light and sparsely furnished, with scenic design by Wilson Chin (Berkeley Rep’s Aubergine); costumes by David Hyman (PH’s The Treasurer); lighting by Jen Schriever (Broadway’s Eclipsed) with just two chairs and one table and no clear reason for them being there. They have died, this they are aware, and although the years don’t match up, time is irrelevant. One by one, they enter, look around, try to make sense of the situation, and attempt to leave only to find that they are locked in.

There are projections, designed by Caite Hevner (In Transit) and original music and sound by  Lindsay Jones (Public’s Privacy), that add to the drama.  The phrases are only seen by us, reminding me somewhat of the chapters of character-focus in the much better and more precise play, The Doll’s House, Part 2. The writings on the wall give us comical hints and guidance about what’s happening and what is to come. It tells us, “Don’t Close The Door”, but no one abides by that instruction. It also sheds light that these dead souls are “Three Jonahs” in a whale’s belly, and “Dead as Doornails”.  With those clues, we get the picture quite quickly, far faster than the three wise men do.  Squabbling narcissistically, Jefferson (Michael Laurence), Dickens (Duane Boutté) and Tolstoy (Thom Sesma) search and try to ascertain why they are in this room together, and what is the existential purpose. Laurence (Braodway’s Talk Radio) as Jefferson and Sesma (CSC’s Pacific Overtures) as Tolstoy are strong and believable in their characterizations, making us believe they are the souls of these serious men. Boutté (Lincoln Center’s Parade) on the other hand, never really resonates as the flamboyant Dickens. He’s hard to understand his spirited speech and to see as this famous British author. But together, the egotistical three must figure out what they need to do on this day of reckoning in order to save themselves from being trapped in this room pacing for eternity. And if they do, they hope to be granted freedom from this confinement and move beyond. Beyond to what? That’s another question that doesn’t appear to be asked in this slight metaphysical play.

In many ways, I think the director, Kimberly Senior (LCT3’s Disgraced) has some of the same questions to figure out and answer for us.  One of the main ones, is whether there is enough to say by these three philosophers that is captivating enough for this 90 minute play. They speak and speak, clarifying their positions on God and religion but I wonder, are they speaking more out of fear that we might get to the end too quickly, and find out that Carter doesn’t have as much to say as he and we had hoped in the end. “Tales must sparkle,” Dickens insists, but rarely does the play’s bigger picture come close. It’s diverting and amusing but leaves us unsatisfied when the door finally pops open. In some ways, we are just as glad as they are.

Suzanna BowlingSeptember 26, 2021
Read More
Scroll for more
Tap
Time and The Conways or How The Past Always Comes Back To Haunt Us
The Honeymooners: Like a Comfy Ride in a 54 Buick