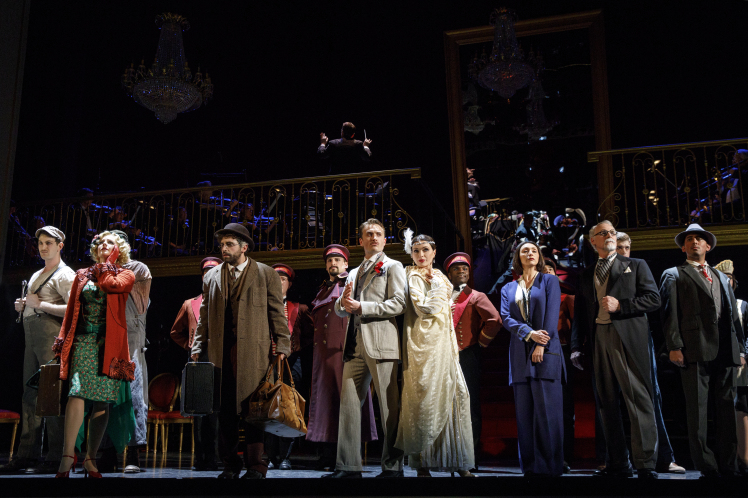 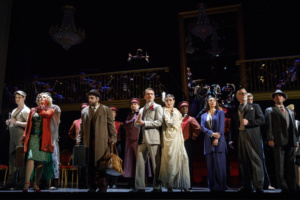 As with any Encores! production, I always find myself swept up in the history of these shows, dying to look them up on Wikipedia and ingest the nostalgia.  The dreamy desire to have been there and seen that can’t be helped. Reading about it now, the 1989 Broadway production of Grand Hotel, the Musical, directed by the legendary Tommy Tune and starring a cast of actors that included Liliane Montevecchi as Elizaveta Grushinskaya, Michael Jeter as Otto Kringelein (winning a Tony and Drama Desk Award), David Carroll as the Baron, and the always amazing and very young new talent, Jane Krakowski as Flaemmchen. It garnered 12 Tony Award nominations, winning five, including best direction and choreography for Tommy Tune, making me want to run over to that museum next door to the Lincoln Center and see if I can watch it (click here), as it sounds like a joy in a bottle. I feel duty bound now, as I was told twice by others around me on the night I saw it, to tell you to watch a clip of one of the best numbers from that Tommy Tune production, showing exactly why Jeter got so much praise for his role, assisted with such handsome grace by the wonderful Carroll. The sad tale in this slice of history belongs to Carroll, who died from a pulmonary embolism relating to AIDS in the recording studio as he was about to record his vocal tracks for the Broadway recording. The phenomenal Brent Barrett, who at the time was playing the part on Broadway, stepped in at the last moment, and graced the recording with his lovely voice.  So here’s that fancy footwork that gave Tune and Carroll their much deserved Tony.

Thankfully, the glory that is Encores! allows us the opportunity to see this production anew, freshly pulled out from the vaults, looking as wonderfully and decrepitely good in that first unveiling of the legendary Grand Hotel as I’m sure it did almost 30 years ago.  It is as if it had literally been locked up for those many decades in some Broadway house waiting to be dusted off with every set piece covered with sheets for its own protection, and the chandeliers lowered to the floor.  Beautiful but ghostly, until the orchestra starts, and the music swirls us back in time to the luxurious world of Old Berlin and its most glorious hotel.

The interior is revealed, and the chandeliers are returned to their rightful place, high about the lobby floor. We see the beautiful patrons parading in, and the men and women down below in the scullery, working hard for the rich above.  It’s gritty and gorgeous, and the music from this passionate Broadway musical, Grand Hotel, is as sweeping and grand as the hotel itself. The Encores! Orchestra, with music direction by Rob Berman (Bright Star) and music coordination by Seymour Red Press (original orchestration by Peter Matz) sounds as rich and engaging as it always does, surrounding the action up above on the second tier of the hotel lobby. This surprisingly Broadway-ready production, thrown together in the shortest of time frames as they tend and like to do at the New York City Center Encores!, looks as polished and ready for its close-up as any show that has graced this series.  It is not filled with the grandest of superstars, something we have all gotten used to with the Encores! series (Jake Gyllenhall and Annaleigh Ashford in Sunday in the Park…, Bebe Neuwirth and Vanessa Williams in Hey, Look Me Over!, Steven Pasquale and Victoria Clark in Assassins, Megan Hilty and Andy Karl in Annie Get Your Gun, just to name a few), but the cast is of the highest calibre, pros doing what they do and have done for years on and off-Broadway. Looking and singing the part at every turn.  It’s wildly entertaining and a joyous blast from the past, even when the book, by Luther Davis, based on Vicki Baum’s 1929 novel and play, Menschen im Hotel (People in a Hotel) gets a bit muddled in its storytelling layering tragedy on top of desperation and desire, with just a glimmer of hope and possibility showing its happy face in the lobby from time to time. The added upstairs/downstairs ideas of class inequality get a bit lost in the shuffle with the other stories getting a stronger spotlight. But we relish the moments of joy, especially in the music and lyrics by Robert Wright and George Forrest (Kismet), with additional music and lyrics by Maury Yeston (Titanic, Nine), and feel the pain, loss, and agonizing discomfort that haunts guests that stroll through the lobby of the Grand Hotel.  All these characters are in need, desperate for something to alter their course.  Some find their salvation, even if it’s just for a moment, while others do not.

From that first moment of “The Grand Parade” when the lineup of characters checking in to the Grand Hotel gather and show their true faces, we are pulled in.  Heléna Yorke (American Psycho), as the Jane Krackowski stand-in (I must admit that I didn’t know she had starred in the original production, but I couldn’t stop thinking about her throughout, it is just so ‘her’) is gloriously hungry for salvation as the typist and wanna-be movie star, Flaemmchen, giving it all in the wonderfully performed “Girl in the Mirror” and dancing marvelously in the numbers, “Maybe My Baby” and “The Grand Charleston” performed by The Jimmys (James T. Lane, Daniel Yearwood).  Her skills, especially in the entertaining and romantic dance numbers with the handsome and dashing Baron Felix Von Gaigern, played by the noble and charming James Snyder (If/Then, In Transit), stealing the breath away from all that surround him are perfect, directed and choreographed with a stunning precision that is reminiscent of Tune’s legendary work. The desperately poor Baron, in the middle of one of his many noble realignments, disappoints Falemmchen quite innocently when he engages with the lovely and talented Irina Dvorovenko (On Your Toes, the upcoming Vineyard’s The Beast in the Jungle), as the prima ballerina Elizaveta Grushinskaya.  Snyder’s rendition of “Love Can’t Happen” is achingly charming and just what Elizaveta needs to hear.  She is flailing, stumbling through her life as the dancing diva aging out of her own glamorous profession. She is dramatically desperate, maybe a bit too much at moments, for salvation and love, even when it exists right beside her in the heart of her confidante, Raffaela Ottannio, played lovingly by Natascia Diaz (tick, tick, BOOM!).

John Bossett (Newsies) delivers his own forceful brand of desperation as the business man whose empire is falling around him. But the true star of the evening, besides the gorgeous tango dancing sequences performed with perfection by Junior Cervila (Tango Argentina) and Guadalupe Garcia (Glorias Porteñas), is the deeply sympathetic and thoroughly engaging Brandon Uranowitz (Falsettos, Prince of Broadway) as Otto Kringelein, the very ill and dying Jewish bookkeeper looking for a bit of life and excitement at the Grand Hotel.  The dying man is looking for life before he checks out, while the living are not so hopefully,. This may be the richest line stated by William Ryall, (Wicked, an original cast member from Grand Hotel that started in a dilapidated hotel ballroom on w43rd st, to the Boston tryout and finally, the Broadway stage), as the narrator and doctor who can’t quite seem to entirely give up with existence at the end of each and every day. Just one more night, he says. And then he’ll depart.

On the other hand, Uranowitz wants more, shining each and every moment, especially in those friendships and engagements that give him a bit more life and joy, something he has never quite found outside of the Grand Hotel.  When he is dancing with Yorke’s Falemmchen to the refreshing and glorious “Who Couldn’t Dance with You?” the level of aliveness and pleasure is intoxicating, but it is really in the show-stopping and most famous number, the one that I linked above with Michael Jeter, “We’ll Take a Glass Together” that Uranowitz clearly is having the time of his life, and so are we. It’s pure champagne, bubbling with fun and frolicking pleasure, seen through the eyes of a man who has never experienced it. Whether this show will ever make the same Chicago-esque transfer to Broadway remains to be seen.  It’s a gloriously lush production, dark but life-affirming, and although slightly cramped below the orchestra on the lavish set designed by Allen Moyer (Broadway’s Grey Gardens), with exquisite costumes by Linda Cho (Broadway’s Anastasia) and solid lighting by Ken Billington (Broadway’s The Drowsy Chaperone), it deserves a longer life, but I’m not so sure this story has a desperate need to be told.  It’s perfectly ready to make the jump, but will enough people care about these glamorous but desperate souls to facilitate a long enough Broadway run? I’m not so sure, but I do feel I’d like one more night at the Grand Hotel to ponder that question. I’m not so ready to leave just yet.