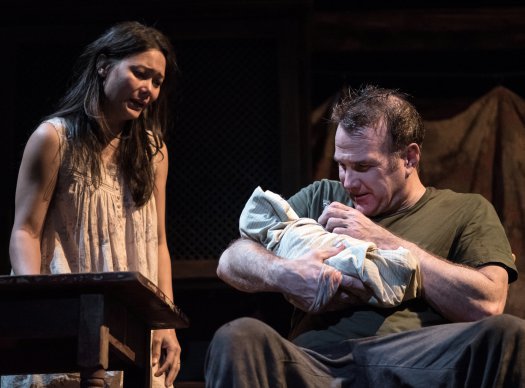 The Gravedigger’s Lullaby Sings To Be Heard

The Gravedigger’s Lullaby Sings To Be Heard 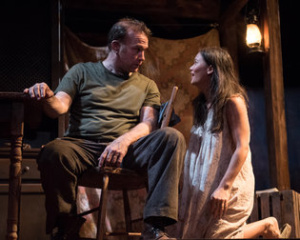 Jeff Talbott’s The Gravedigger’s Lullaby, for TACT, on Theatre Row, speaks to the heart of those people stuck in their lot never being able to escape. 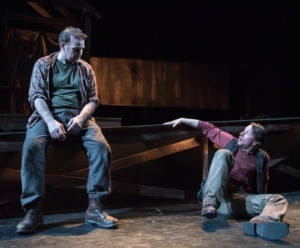 Baylen (Ted Koch) is the gravedigger in question. He lives in a shack, has no food, a wife (KK Moggie) who he can’t really support and a colicky baby, who he thinks is mad at the world. He works from sun-up to sundown for pennies, digging graves like his father before him. His fellow gravedigger and friend Gizzer (Todd Lawson), has been furious with the world since he was a child and his father died as a result of an accident at the local plant. His mother was left with no money and six mouths to feed. Gizzer wants to banter and play, but Baylen, whose house is a never-ending track of his baby crying just wants quiet. Baylon longs for the days when it was just him and his wife, who washes other people’s clothes for a living. Both are tired; yet love each other, despite the horrific conditions of their lot. 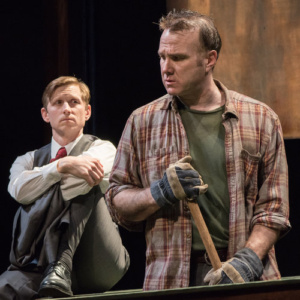 As Baylon and Gizzer are digging, Charles (Jeremy Beck), appears. It turns out he is the son of the man who owns the plant where Gizzer’s father died and Gizzer hates him on site. Baylen tries to navigate the tension. When Baylon learns Charles’s father is dying he offers Charles conversation and what little food he has, but the a vast gap between the two classes ends with a rift.

On the day Charles father dies; he comes to offer Baylon an apology with a large tip, Baylon however wants a job and begs Charles to offer one. The scene is heartbreaking and there is an audible relief when Charles shows some humanity.

Back home Baylon has used the tip money to buy his wife a beautiful new dress. Things are looking up. He still has to tell Gizzer, the news. The two go out drinking and when he tells him, they gets into a fight. Needless to say things do not go well. To say any more would spoil the show.

Mr. Koch, makes you feel for Baylon. His last speech is so powerful and full of truth you just want to sob, but most will tune it out, as it will devastatingly hit home. Ms. Moggie and Mr. Koch have chemistry. The exhaustion they feel from a baby who cries incessantly and from a dead end life shows powerfully on each, yet we all see the human spirit that tries despite all odds. Mr. Lawson brings the pain of never having escaped loss, combined with humor. I have long loved Mr. Beck’s work and here again, he allows you to see a human side of someone who has more than everyone else and how that can be just as of an entrapment.

Jenn Thompson’s direction holds this piece together. She allows the pacing and the character study is fleshed out.

Wilson Chin’s scenic design puts us in the squalor and the desolate life these people live day in and day out. Toby Jaguar Algya’s sound design had you wanting to strangle the baby. Matthew Richards’s lighting design sets the tone, as did Tracy Christensen costumes.

Mr. Talbott’s script has some elements that need a little more subtly, such as the way Charles appears in the end, but there are easy ways to fix that. Also the play takes awhile to get into as nothing much is happening. The scenes between Baylon and Charles and in the end; Baylon and Margot are powerful and worth the wait.

In the end The Gravedigger’s Lullaby offers hope and shows the resilience of humanity despite all odds, instead of the drown it out mentality that is sweeping this country.