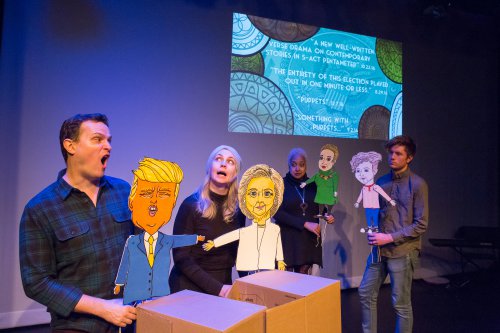 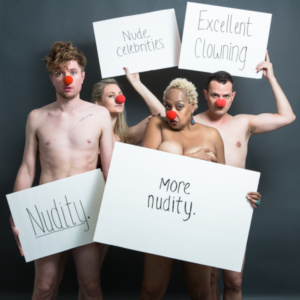 The Neo-Futurists plays are normally out there and geared towards the 20 something East Villager or Brooklynite. It was a complete surprise to inhabit Connor Sampson’s, The Great American Drama.

The show starts off with Lijie a talented singer/songwriter serenading us with positive messages and getting us to interact. This smooth voiced vocalist was pleasing as she played on electric guitar, piano and acoustic guitar. We then meet Connor, Daniel McCoy, Australian Katy-May Hudson and Nicole Hill and learn the plot is derived from an online survey asking people to put into words what they like best and what they’d most want to see on stage. The cast then acts out the results in rather humorous and creative ways. The problem is the results all seem like they came from the people who sneer and look down their noses at anything commercial, except Hamilton, yet are dying and dreaming to get into those Broadway production. The people I described in paragraph one. The goal it seems is to create an ideal performance and show.

The audience is asked to participate and for the most part they comply. What we got from the pollsters was semi typical, Trump and Hillary, nudity, Hamilton of course, puppets and can you believe this “A Fountain of Period Blood.” Seriously what kind of wrapped mind says this? In my travels I can tell you what people are sick of and what they do not want to see “political correctness that changes the play,” bad acting and politics. What they do want is good entertainment that takes them out of thier everyday lives, a plot that has an arc and an ending, actors who are honest and connected and shows that bring humanity together instead of spewing all this hate.

The cast is talented, inventive and energetic, however the best moment is when Connor is left alone and gets real with the audience. In that moment he exposes his truth, his fears and his hopes. That is relatable, that is honest and this makes good theatre.

Director Greg Taubman, mixes scripted material with improve and audience participation for a easy ride through this show that exposes life.

I was confused about the moment when “Soul Bird,” was sung. Though beautifully performed by Ms. Hill, I haven’t a clue where this actually fits in and why she was singing, other than she has a good voice and it allowed for some pretty projections.

I would like to see this piece developed, but with a broader scope of all ages and opinions. This needs to come from people other that artists, like the people who really buy tickets. I woul d suggest standing outside a theatre and doing a survey there. Go to Broadway, Off Broadway and Off Off and then the show will seem more real.