The Great Society Means To Get New York To Vote 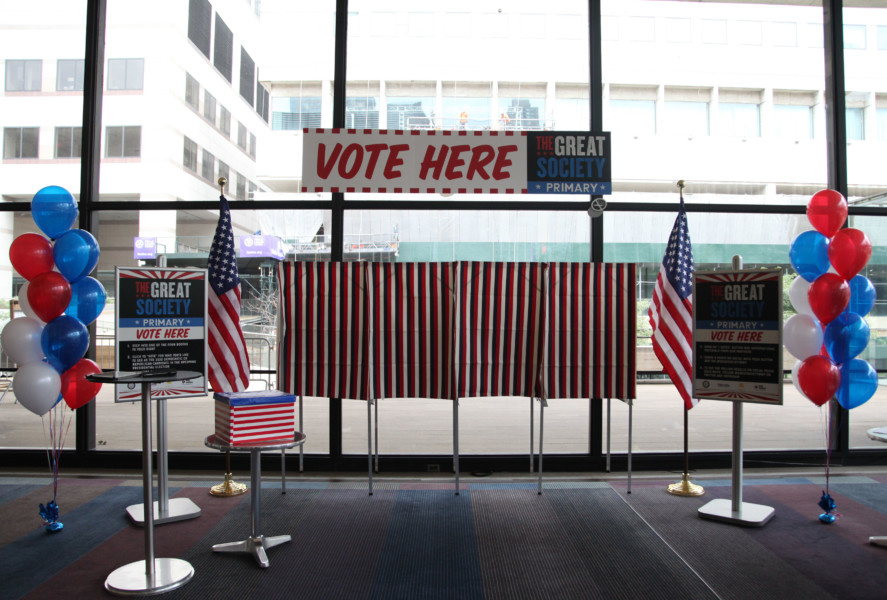 The Great Society Means To Get New York To Vote

The schedule for voter registration events is as follows:

Each event will take place in the lobby of the Vivian Beaumont Theater (150 W 65th Street).

On August 6, 1965, President Johnson signed into law the Voting Rights Act of 1965, landmark federal legislation that prohibits racial discrimination in voting, which took effect during the height of the civil rights movement in the United States. Designed to enforce the voting rights guaranteed by the Fourteenth and Fifteenth Amendments to the United States Constitution, the Act secured the right to vote for racial minorities throughout the country, especially in the South. The Act is considered to be the most effective piece of federal civil rights legislation ever enacted in the country.

In addition to these voter registration events, the ‘Great Society Primary’ is currently running at the Vivian Beaumont Theater. All attendees of The Great Society have the opportunity to ‘vote’ for the candidate they would like to see win either the Democratic or Republican 2020 presidential primary in one of four voting booths in the theater lobby. You can also cast your ballot online GreatSocietyBroadway.com; results will be shared following each performance at Twitter.com/GreatSocietyBwy.

The Great Society is currently in preview performances and will officially open on Tuesday, October 1, 2019 at the Vivian Beaumont Theater (150 West 65th St). This is a 12-week limited engagement.

Tickets to The Great Society are available by calling 800-447-7400, online at GreatSocietyBroadway.com or in person at the Lincoln Center Theater box office. Ticket prices range from $107-157.

FairVote is a nonpartisan champion of electoral reforms that give voters greater choice, a stronger voice, and a representative democracy that works for all Americans. Since 1992 it has been a policy and advocacy trailblazer that advances and wins electoral reforms at the local, state, and national level through strategic research, communications and collaboration. Today we are the driving force behind advancing ranked choice voting and fair representation in multi-winner legislative districts that will open up our elections to better choices, fairer representation and more civil campaigns.

NYC Votes is the nonpartisan voter engagement initiative of the New York City Campaign Finance Board (CFB) and its Voter Assistance Advisory Committee (VAAC). In addition to promoting voter registration, participation, and civic engagement in New York City through its many programs and partnerships, NYC Votes sponsors the city’s official Debate Program and produces the citywide Voter Guide.

Young Invincibles is a nonprofit policy and advocacy organization committed to creating economic opportunity for young adults ages 18 to 34 by amplifying their voices in the political process and elevating their needs in higher education, workforce, civic engagement, and healthcare.

Suzanna BowlingSeptember 14, 2020
Read More
Scroll for more
Tap
Jordin Sparks Takes To The Broadway Stage as Jenna in Waitress Tonight.
The Broadway Blessing Blessed Not Just Broadway But Everyone Who Attended