The Guggenheim Bilbao Museum has announced that from Monday, November 21, members of the public will be able to book tickets for Immersions, a free large-scale light, sound and projection mapping show designed as the grand finale to the Museum’s 25th Anniversary celebrations. This immersive experience will take place in the Atrium between December 3 and 11. It is sponsored by Seguros Bilbao, a Trustee of the Guggenheim Bilbao Museum since its opening in 1997 who thus reiterates its commitment as a long- standing supporter of the Museum’s activity. Seguros Bilbao is part of Grupo Catalana Occidente (GCO), one of leading companies in the Spanish insurance sector and for credit insurance in the world. 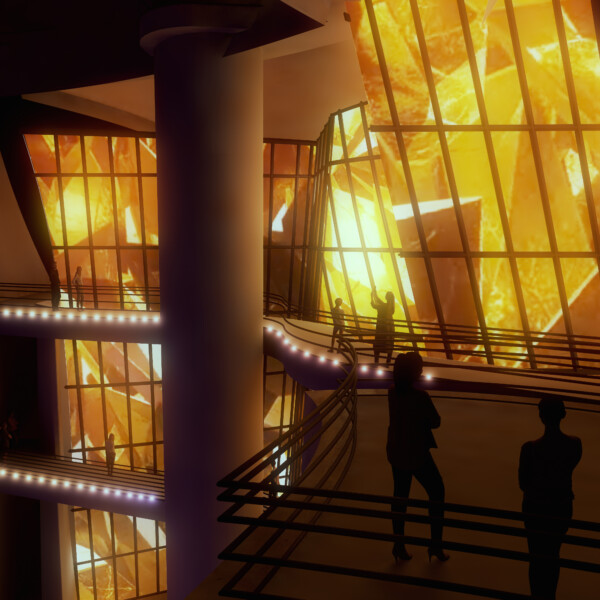 Tickets must be booked in advance through the Museum’s website, https://www.guggenheim- bilbao.eus/actividades/immersions, and members of the general public can book theirs from 9 am on November 21 (Friends of the Museum can book from November 17). Alternatively, you can call (+34) 94 555 1380 from Monday to Friday between 9am and 2pm.

Immersions continues on from Reflections, the spectacular projection mapping show on the façade of the Frank Gehry-designed building, which took place in 2017 to mark the museum’s 20th anniversary. Through Immersions, the history of the museum told on the outside of the building moves inside, using the organic forms of the Atrium as a canvas.

‘The randomness of the curves are designed to catch the light’, said Frank Gehry in reference to the building of the Museo Guggenheim Bilbao.

Tracing the museum’s most important milestones throughout history and driven by the same spectacular soundtrack, Immersions will place the public at the centre of a unique spectacle of captivating sound, light and projection, taking viewers from being mere observers to an all-encompassing, sensory experience.

Immersions is the latest project from the British design studio 59 Productions, which created Reflections in 2017 and has won numerous awards for producing spectacular work for some of the world’s most iconic places, such as the Tower of London, National Theatre and the Royal Opera House in London, The Metropolitan Opera and the United Nations Headquarters in New York, the Sydney Opera House, and the Salzburg Festival.

Its most recent projects in the cultural sphere include audio-visual design and interactive exhibit design at the Bob Dylan Center in Tulsa, Oklahoma; Leonardo: Experience a Masterpiece at the National Gallery in London, an immersive exploration of the genius and practice of the painter; a video-installation on the history of the Baroque at Hampton Court Palace in London; and a projection mapping at Qasr Al Watan palace in Abu Dhabi, commissioned by the Department of Culture and Tourism.