The Half-Life of Marie Curie Radiates a Powerful Glow 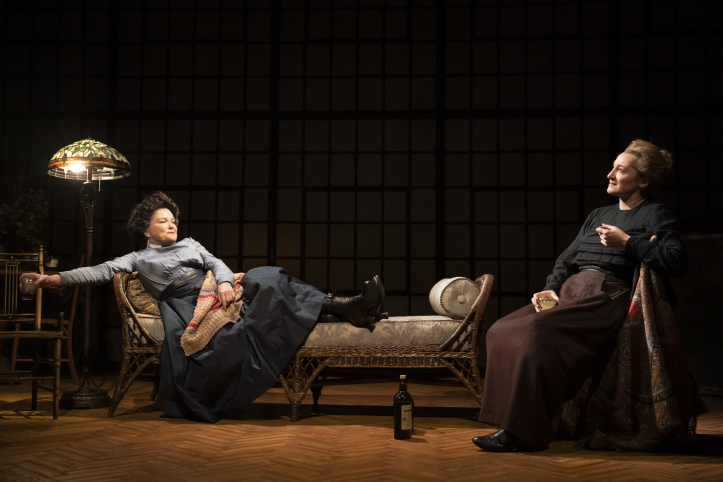 The Half-Life of Marie Curie Radiates a Powerful Glow

“Radioactive is my word“, and with that utterance The Half-Life of Marie Curie, presented by Audible Theater at the Minetta Lane Theatre, sheds its skin to the point of abandonment, giving life and dignity to the two brilliant women at the center of this true to life tale. The focused play is a wise salute to these wise women but almost more importantly to the power of female friendship and how that bond can help them survive an unfair world during a time when these two have to do battle just to sit at the Nobel Prize winning table. It’s within that first fiery monologue delivered ever so strongly by the incomparable Francesca Faridany (Broadway’s Curious Incident…) as the Polish and naturalized-French physicist and chemist. Marie Curie, that the dynamic and engaging slice of history captures our heart almost effortlessly, before spinning forward with a radiant and magnificent glow. She’s heartbreakingly engaging as the woman who changed the world with her Nobel Prize-winning curiosity in Chemistry and Physics, finding the human core within the historic legacy of the first person and the only woman to win the Nobel prize twice, the only person to win the Nobel Prize in two different scientific fields, the first woman to become a professor at the University of Paris, and in 1995, she became the first woman to be entombed on her own merits in the Panthéon in Paris.

The compelling and smart exploration of her and her dynamic friendship with the equally brilliant Hertha Ayrton, as directed with passion and clarity by Gaye Taylor Upchurch (RTC’s The Last Match), marches itself boldly into a scandal, circa 1911. Curie finds herself humiliated and trapped inside her home by an angry racist mob outside. They dishearteningly call her a foreign Jewish home-wrecker (that’s the nicer phrase), as a year long affair with the married physicist Paul Langevin, a former student of Pierre Curie’s, comes to the light of day. And even though he is a married man estranged from his wife, the male scientist, as Curie’s magnificent English friend and brilliant scientist, Hertha Ayrton, most wonderfully embodied by the majestic Kate Mulgrew (2008 Broadway’s Equus) loves to point out, doesn’t get racked over the radioactive coals like Curie does. He walks away, unscathed, while she is basically beaten down and banished from her passion and profession. She is thrown to the dogs for both her bold female-ness and her foreign blood, even with the honors that the French had bestowed upon her throughout her world-recognized career.

Hertha Ayrton, the renown British engineer, mathematician, physicist and inventor, and progressive suffragette, has come to Paris, swooping in to rescue the scandalized scientist who sits cowering on a couch. She is gorgeously positioned in the fetal position on a broad stage designed most simply by the brilliant Rachel Hauck (Broadway’s Hadestown). With detailed costuming by Sarah Laux (Broadway’s The Band’s Visit), strong lighting by Amith Chandrashaker (PH’s Wives), and straight forward sound design by Darron L. West (MCC’s Moscow Moscow…), The Half-Life of Marie Curie drives forward from city to country side, dragging along the glowing vial that will ultimately be the death of Curie. “Love is protest“, and the two discuss and do battle with the unfair status the two brave and determined women have to navigate. The outrage towards her because of her affair is so intense both personally and professionally, that Curie, on Ayrton’s insistence, packs up and flees Paris for her friend’s English coastal home, to recover, regroup, and revive.

Written with clear determination by Lauren Gunderson (I and You), women are “punished for being alive and loving it“, Hertha Ayrton states, most passionately and humorously. They are both beautiful geniuses of the science world, played perfectly by two beautiful geniuses of the acting community, digging in and unpacking their relationship to one another and the world with feisty fun and abandonment. These two make this whole drama so glorious to watch, and even if their engagement and dramatic arc is somewhat carved in standard play-writing tradition and construction, the two make it all work with heartfelt precision. They never give us a moment to look away or wander in our mind to another place or time. The Half-Life of Marie Curie finds the power in their companionship, and keeps us enthralled and thirsty for a swig of whatever it is they are having, as it looks like a party we all would want to be invited to every night possible.