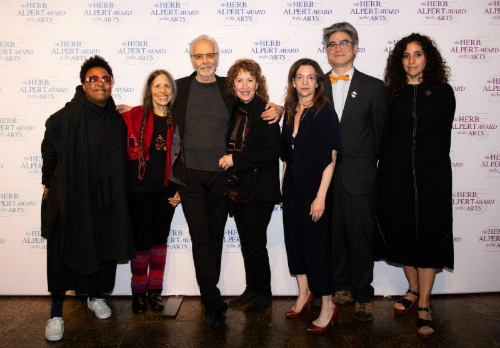 Herb Alpert, his wife Lani Hall Alpert and their Herb Alpert Foundation hosted a celebration at the Caldwell Factory honoring 25 years of the Herb Alpert Award in the Arts (HAAIA).

Prominent artists including Vijay Iyer (panelist/winner) and George Lewis (panelist/winner) and legendary broadcast journalist Bill Moyers paid tribute to the awards program and Herb Alpert for his unwavering support of the arts, his impact on American music, culture and even their own careers.

Past winners Derek Bermel (music), Joanna Haigood (dance) and Bill “Reverend Billy” Talen (theatre) gave performances. Multi-disciplinary panelist Kristy Edmunds gave a rousing tribute to the awards and talked about a recurring theme heard from guests the entire evening – what it meant to receive the recognition, encouragement and funding to continue their important, risk-taking work.

Noted choreographer, dancer and HAAIA panelist Gus Solomons, Jr. summed up the evening’s celebration. “I am awed by Mr. Alpert’s generosity and support of cutting-edge arts in five disciplines. I was honored to be a panelist and to be invited to participate. Thank you for bringing light into an increasingly darkening cultural ecosystem in the current USA in the hands of a culturally tone-deaf administration.

The evening was uplifting and inspiring.” The awards recognize artists working in Dance, Film/Video, Music, Theatre and Visual Arts who are risk-takers using their talent, vision, and labor to make something that matters within and potentially beyond their field. The outstanding candidate in each genre receives an unrestricted prize of $75,000.

“Herb Alpert had a hunch that a prize to artists—artists who took risks—could make a difference to artists, certainly, and maybe even in the world. He said: ‘what if?’ – the core of creativity.

The Herb Alpert Award in the Arts is an unrestricted prize of $75,000 given annually to five, risk-taking, mid-career artists working in the fields of dance, film/video, music, theatre and the visual arts. The prize was initiated and funded by the Herb Alpert Foundation and has been administered by the California Institute of the Arts since 1994. The Award honors and supports artists respected for their creativity, ingenuity, and bodies of work, at a moment in their lives when they are poised to propel their art in new and unpredictable directions. The Herb Alpert Award recognizes experimenters who are making something that matters within and beyond their field.