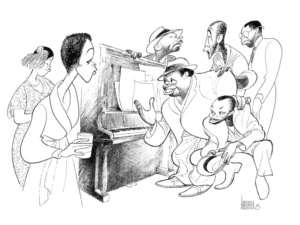 The artist covered nine decades, and each one presents a fascinating look at the popular culture of the times. With the burgeoning interest in the 1990s, this exhibition, the start of a regular series investigating Hirschfeld’s work during different decades, explores what Hirschfeld saw and drew during the ‘90s. Whether it was theater, film, television, music or politics, Hirschfeld captured the most significant figures and productions of the period. From August Wilson’s The Piano Lesson to Jonathan Larson’s Rent we see the American Theatre evolving. On television there are shows from the opposite ends of the spectrum in Seinfeld and Beverly Hills 90210. At the movies, the decade sees the last Hirschfeld movie poster, appropriately for the film adaptation of Noises Off, to the emergence of a new major studio, DreamWorks in a drawing that was featured on the front page of The New York Times. In music, there is a colorful portrait of one of the decade’s most successful pop artists, Madonna, as well as an act that filled stadiums around the world: The Three Tenors. Even the political and media worlds don’t escape Hirschfeld’s pen, with portraits of Presidential contender Ross Perot and a young George Stephanopoulos as he morphed from political strategist to on air personality 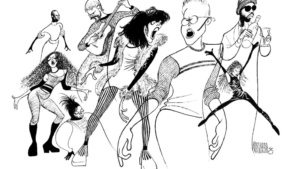 “At an age most artists would be slowing down, in the 1990s Hirschfeld was doing more than ever,” says David Leopold, Creative Director of The Al Hirschfeld Foundation and curator of the new online exhibition. “Hirschfeld continued his unbroken line into his now eighth decade and was inspired by the arts that he saw and heard. In addition to his drawings, which continued to be seen in dozens of publications, album covers, posters, programs, book covers, and prints, this decade saw him as the subject of an Oscar nominated documentary, The Line King, as well as the inspiration for one of the biggest Disney films of the decade, Aladdin.” This online exhibition is the start of a regular series that will explore Hirschfeld works in different decades to not only see what he drew, but how he drew. “It is remarkable that Hirschfeld’s line remained as strong as ever, and that he continued to experiment with new approaches and new media.” 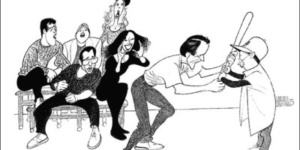 Suzanna BowlingJanuary 26, 2023
Read More
Scroll for more
Tap
You Are There At The Press Event For ¡Americano!: The Interviews
Passionate Bridges At Axelrod Center