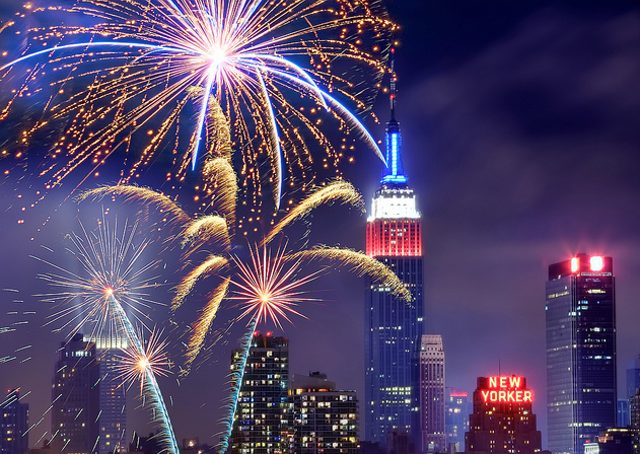 The History of the Macy’s Firework Show

The History of the Macy’s Firework Show

The first-ever Macy’s fireworks show lit up New York skies in 1958, but not on July Fourth. The “pyrotechnic extravaganza” took place over the Hudson River on July 1 as a celebration of the department store’s 100th anniversary. About a million people showed up to watch. That early antecedent was replaced by the show we know today in 1976. Macy’s partnered with the Walt Disney Company to celebrate the nation’s Bicentennial with a fireworks display that became an annual tradition. Since 1977 (save for the 1986, when the pyrotechnics were held as part of the weekend-long rededication of the Statue of Liberty. Those fireworks were broadcast on ABC as part of the coverage) the Macy’s Department Store, whose home base and main store are based in Manhattan has hosted the annual pyrotechnic celebration of America’s birthday with a half-hour show from barges on either the East River or the Hudson River.

Planning a Macy’s fireworks show begins with the musical score. “is the first thing we do,” said Amy Kule head of the department that puts together the “Thanksgiving Parade and The Fireworks. The pyrotechnics are choreographed to mirror the crests and troughs of the score.

Gone are the days when the fireworks were manually fired from the barges by a person with a metal rod, but the on-board preparation of shells and firing mortars still takes up to 12 days, Kule said. “We have 50 pyrotechnicians on the barges that are hand-loading each one of the shells into the mortars and then hand-wiring those shells into the computer,” which is located at a command center in Long Island City. Altogether, it takes 50 miles of cabling and 1,600 lines of computer programmed cues to prepare the synchronized launch of about 2,200 shells per minute.

Lin-Manuel Miranda and Prizeo Offer a Prize To Help Immigrants: We Get the Job Done Coalition
Feeling Patriotic in Style