The Hit Men Meet The Press 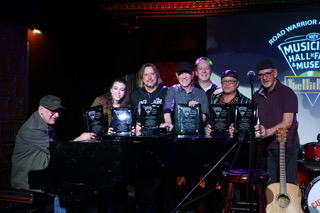 The Hit Men Meet The Press

On Friday April 26, 2019 www.t2conline.com was invited to  a press  preview of The Hit Men’s Homecoming Show they were planning to perform Saturday night April 27, 2019 to a sold out crowd at The Cutting Room. The Press Preview was hosted by Jonathan Clarke,( Q104.3’s “Out of the Box”.) Each member of the group told stories of some memorable moments working on the road.

The Hit Men have been selected by the Musicians Hall of Fame and Museum™ in Nashville to receive a special award “for their years of dedication to the music, and the countless miles … that they have traveled in delivering so many hits throughout the world.”The award was presented to each member of the band by Ariana Gates (daughter of the late  Larry Gates, vocalist, composer, lyricist and former  member.)

Suzanna BowlingMarch 3, 2021
Read More
Scroll for more
Tap
Gem of a Film Westfalia at Tribeca Film Festival
May Events In New York get Ready to Bike and See Some Art, Film and Culture