The Home Place Is Not So Comforting

The Home Place Is Not So Comforting

Brian Friel’s The Home Place at The Irish Repertory Theatre has the lower class rising up. Set in Ballybeg, in the County of Donegal in the late 1870’s, an English landholder has recently been brutally murdered. This sets the tone for the beginning of a land war. Locals are laying claim to the land farmed for generations by English settlers. Christopher Gore (John Windsor-Cunningham), a caring landlord, states, “the doomed nexus of those who believe they are the possessors and those who believe they are the dispossessed”.  The play shows a changing Ireland, where the locals are no longer just going to pay their rent. 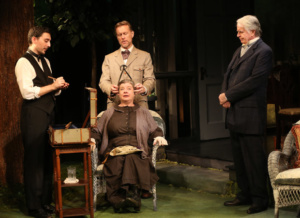 Christopher’s arrogant cousin, Richard (Christopher Randolph), doesn’t help matters. He believes by measuring a nation’s heads he can discover racial characteristics that are predictors of behavior. Richard is chillingly convinced that his technique will allow England “not just to rule an empire”, but “control a whole universe”. In the meantime, local rebel, Con Doherty (Johnny Hopkins), is having no part of it. 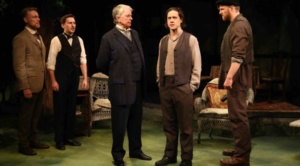 To make matters worse, Christopher and his son, David (Ed Malone), both fancy his housekeeper, Margaret (Rachel Pickup), but she hasn’t chosen who has her heart. Christopher is a man displaced, whose heart is in Ireland and with his housekeeper, and whose life is on the verge of extinction.

The cast is well suited to the piece with Mr. Randolph perfectly devilish. Charlotte Moore does a nice job of directing, but this play plods along. Thankfully, the scenery by James Noone was attractive to look at.