The Homebound Project Lineup For Sixth Edition For No Kid Hungry 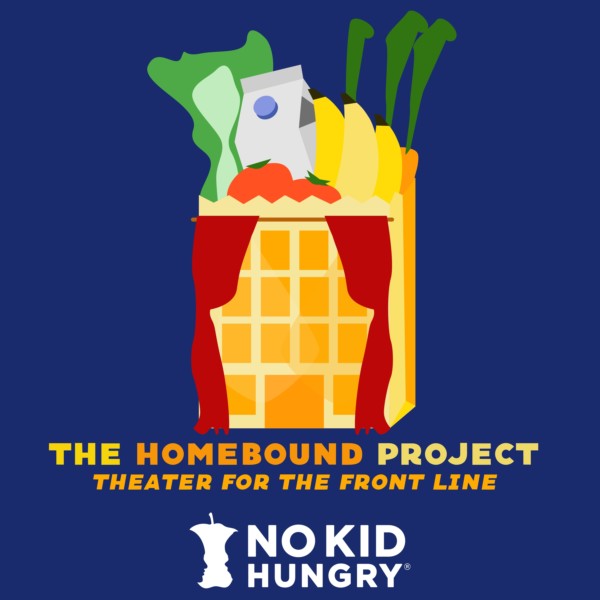 The Homebound Project Lineup For Sixth Edition For No Kid Hungry

Following an “ambitious” (New York Times) debut on May 6, 2020, with an “extremely impressive roster of leading actors and writers” (Time Out New York), The Homebound Project is pleased to announce the lineup for a surprise sixth edition airing January 13–17, 2021. Co-creators Catya McMullen and Jenna Worsham, along with their all-volunteer team, are also pleased to announce that this online theater initiative brought together 137 artists, premiered 56 new theater works, and raised over $150,000 in 2020 for No Kid Hungry, a national campaign working to end childhood hunger.

The Homebound Project is an independent online theater initiative created to help feed hungry children affected by the coronavirus pandemic. All donations made to access the show go directly to No Kid Hungry to support these efforts. Each edition features a collection of new theater works written by homebound playwrights and recorded by sheltering actors. The playwrights in this special edition of The Homebound Project have been given the prompt of: “2021.” Participating actors, playwrights, and directors include:

Christopher Abbott and Deirdre O’Connell in a work by Lucy Thurber, directed by Caitriona McLaughlin;

Dylan Baker and Becky Ann Baker in a work by David Lindsay-Abaire, directed by Paul Mullins;

Jojo Brown in a work by Cece Suazo, directed by Jenna Worsham;

Michael Chernus in a work by Adam Rapp;

Dalia Davi in a work by Ren Dara Santiago, directed by Jenna Worsham;

Nicholas Gorham in a work by Brian Otaño, directed by Tatiana Pandiani;

Rebecca Henderson and Cristin Milioti in a work by Catya McMullen;

Emily Kuroda in a work by Kate Cortesi, directed by Jenna Worsham;

Carolyn Ratteray in a work by Bekah Brunstetter;

Stacey Karen Robinson in a work by Sharon Bridgforth;

A work by Brian Watkins, directed by Danya Taymor;

Babak Tafti in a work by Colette Robert, directed by Taylor Reynolds; and

Daigi-Ann Thompson in a work by Julissa Contreras;
As well as a special guest appearance by Amanda Seyfried.

The sixth edition of The Homebound Project will stream online beginning at 7pm EST on Wednesday, January 13, until 7pm EST on Sunday, January 17. View-at-home tickets are currently on sale at www.homeboundtheater.org and begin at a donation level of $10. Complimentary viewings for first responders and essential workers have been made possible by an anonymous donor. Each collection from this independent theater initiative is available to stream over a strictly limited 4-day period.

“The child hunger crisis needs our attention at this critical and traumatic national moment,” says co-creator Jenna Worsham. “We are very grateful for the exquisite work of our volunteer artists and generous support from audiences around the world. In light of recent school closures, the Homebound Project staff felt strongly that our shared mission to help those most vulnerable during this crisis should continue.”

“Children are living through a devastating hunger crisis in our country,” said Tom Nelson, president and CEO of Share Our Strength, the nonprofit behind the No Kid Hungry campaign. “We’re truly grateful to The Homebound Project team for stepping up again to help feed the 1 in 4 kids who may be facing hunger right now. Actor, producer, viewer or otherwise, it’s going to take all of us to get these children the food they need.”

“As the pandemic continues, children from Manhattan to Maui and everywhere in between are struggling,” said Rachel Sabella, director of No Kid Hungry in New York. “From helping schools purchase food supplies and PPE to fueling national and state policy wins, the incredibly generous donations made through The Homebound Project are truly helping ensure more kids can eat.”

No child should go hungry in America. But in the wake of the coronavirus pandemic, 1 in 4 kids could face hunger this year. No Kid Hungry is working to end childhood hunger by helping launch and improve programs that give all kids the healthy food they need to thrive. This is a problem we know how to solve. No Kid Hungry is a campaign of Share Our Strength, an organization committed to ending hunger and poverty. nokidhungry.org

Suzanna BowlingJanuary 28, 2023
Read More
Scroll for more
Tap
Bernadette Peters and David Hyde Pierce You I Like: A Musical Celebration of Jerry Herman
The Glorious Corner