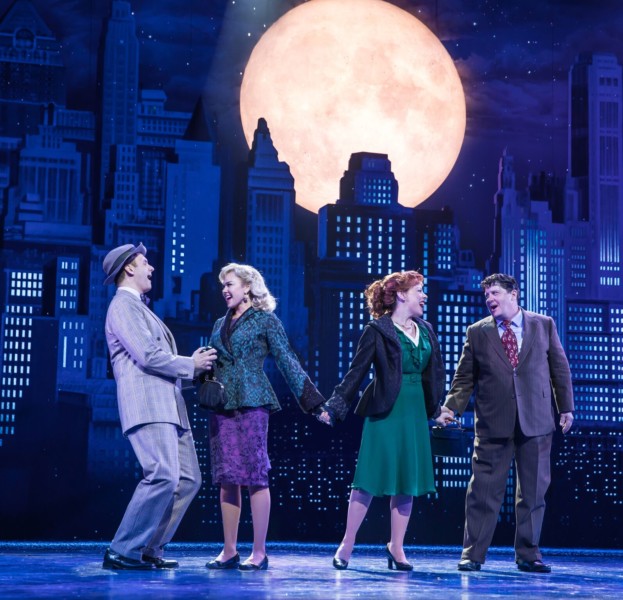 The Honeymooners: Like a Comfy Ride in a 54 Buick

The Honeymooners: Like a Comfy Ride in a 54 Buick 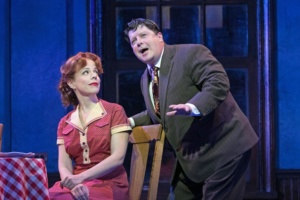 Debuting on October 1st, 1955, “The Honeymooners“, one of the first television shows to portray a working-class married couples in a dull shabby non-idyllic kitchen over in a run-down Brooklyn apartment building, only produced 39 episodes before going off the air. The series was based upon numerous sketches originally airing on the variety series Cavalcade of Stars (which makes a guest appearance in this professional production) hosted by Jackie Gleason, and subsequently, the skits became part of The Jackie Gleason Show. But those characters, Ralph and Alice Kramden (Jackie Gleason, Pert Kelton/Audrey Meadows) and Ed and Trixie Norton (Art Carney, Joyce Randolph), are forever etched most clearly in the minds of many generations of television viewers. Even my own memory-lauded head is filled with clear characterizations and famous quotes of these two couples from watching reruns as a child. And although my memories aren’t as clear and filled with details, The Honeymooners, the new musical comedy playing at the Paper Mill Playhouse in Millburn, NJ is most definitely nostalgic and as much fun as sitting down in front of your television and watching vintage black and white episodes on TVLand.  Directed solidly by John Rando (Broadway’s On the Town, NYCC Encores’ Annie Get Your Gun), it’s a trip down memory lane in an old solid 1954 Buick Skylark, even if the landscape out the rear view mirror is a bit fuzzy in my head. It’s reminiscent, roomy, charming, and a very comfortable ride. Albeit a bit too harmless overall, this sentimental and shiny new show, with music by Stephen Weiner (MTC’s newyorkers), lyrics by Peter Mills (Iron Curtain), and a book by Dusty Kay (ABC’s “Triplecross“) and Bill Nuss (“Hawaii Five-O“), is a smooth ride, and I’m sure it will be seen at every Playhouse and regional theater across America for years to come.

Perfectly cast, The Honeymooners is quick to drive us back to 1955 and the Kramden’s apartment.  In their sparse and shabby kitchen, we find Leslie Kritzer (Something Rotten!) as Alice, the level headed and sturdy wife of Ralph Kramden, played magnificently and with a big loud mouth by Michael McGrath (She Loves Me), who enters like he is stepping right out of your B&W television.  Both are perfect choices for this well remembered couple, they jab at each other relentlessly in a never ending battle filled with famous one-liners and sarcastic responses.  Kritzer and McGrath do a wondrous job recreating the lines and scenarios, while never losing the underlying love that is stitched into every piece of the upholstery. McGrath, found frequently resorting to bellowing insults, and making hollow threats to his wife and best friend, is a most perfect stand-in for the actor, Jackie Gleason, filling out his frame and manners with ease. He gets a worthy opening number that sets up his forever frustration of not making it big with the good old fashioned and fun song, “Going Places“. All the fellow bus drivers down at the fictional Gotham Bus Company join in, marvelously lending great voice and a joyous dance, choreographed solidly by the talented Joshua Bergasse (Charlie and the Chocolate Factory).  This good natured fun and quality performances lasts from beginning to end. 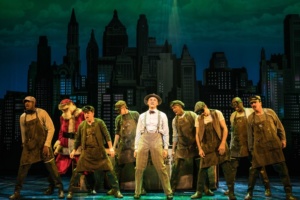 For the other half of this two couple comradery, we have the Nortons.  Ed, played spectacularly by the wonderfully voiced Michael Mastro (Broadway’s West Side Story), with the dynamo Laura Bell Bundy (Broadway’s Hairspray, Legally Blond) as his wife, Trixie are fleshed out in the musical a bit more than then are in those 39 episodes.  Trixie did not appear in every episode of the television show, and was thought to have a less developed character, although references were made to her past burlesque performing days, being a pool-shark, and somewhat bossy toward her husband. The pool shark bossy lady is discarded from the musical, but the back story of the two meeting at the backdoor of a burlesque house is hilarious and very touching, especially in the wonderful flash-back scene, with every precious detailed nugget from the show placed wisely within the dialogue.

Trixie’s burlesque past and the wicked white rose commentary are beautifully retained and inserted. Her two numbers, “Trixie’s Audition” and “Keepin’ it Warm” showcase all of Bundy’s talents both physically and vocally and that is not surprising (but why the flats, Bundy? I’m curious). It’s Mastro, though, who startles us with his voice time and time again, but I do wish his number, “Love Gone Down the Drain” was a good as Mastro. It feels sloppy and a bit confusing at the beginning, but finds some structure after the delightful flash-back. I’m not sure why there is a dirty Santa Clause in the dance number, as it is a bit distracting, but the writers seem insistent to insert a Christmas component whenever they can.  The show makes it up to us later, with the lovely bromance number between the two best friends, “I’ll Miss the Guy” highlighting one of the strongest aspects of the show, the love and devotion Ralph and Ed have for one another. 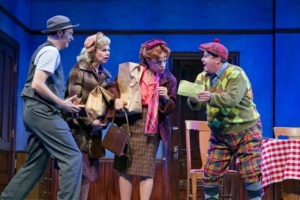 The real number that I was anxiously waiting for, is the one that had to be sung by Kritzer’s Alice.  We get a bit of a preview of her wonder with the delicious “Eigthy-eight Keys“, but I knew a bigger solo number had to materialize, eventually, and you could just tell it was going to be one to remember.  Her character and her performance is so solid and layered, that an Act II number would have to show all of her strength of character, devotion, and determination all rolled up into one big song.  Maybe I put too much hope and anticipation onto a single number, but I have to say, that I wasn’t disappointed (entirely).  Kritzer’s ten o’clock song, “A Woman’s Work” is jazzy and powerful (orchestrations: Doug Bestermann; music direction and vocal arrangements: Remy Kurs), showing just what kind of woman and wife she is, with every bit of the complexities and love that can exist within her marriage. Kritzer’s performance is perfection, more so than the actual song.  Don’t get me wrong, it’s a good piece of swing writing, but won’t go down as legendary.

In some ways, it almost does a disservice to the show, pointing out that some of the other numbers aren’t anywhere close to the well crafted interior of that song. The weakest sadly, is the eleven o’clock number, the last big production number, “Faciamatta Commercial” that sadly is the reason ‘Christmas’ is painted throughout the show’s lush interior. That song, along with every song that has something to do with selling cheese, is, well, I hate to say this, but just plain cheesy. And with the card-board cut-out characterizations of Old Man Faciamatta (Lewis J. Stadlen), the ad man boss Allen Upshaw (David Wohl), and his executive director, Bryce Bennett (Lewis Cleale), the adverting world just feels as funny as canned recorded laugh-tracks, lacking the conviction and pure emotionality that the four talented leads manage miraculously to give off.

The ride that is The Honeymooners is exactly what any old school fan of the show will love to take for a spin. The four leads make it as nostalgically charming and solidly built as one could hope for, with such good moments and lines pulled directly from the television show with precise expertise.  While being fun and following the blueprints of the television show, these four, plus excellent design work from set designer, Beowulf Boritt (Come From Away), costumes by Jess Goldstein (Disney’s Newsies), lighting by Jason Lyons (Hand to God), sound by Kai Harada (Allegiance), and hair, wig and makeup by Leah J. Loukas (Marvin’s Room), create a wonderfully care-free drive down memory lane through old-time New York and Brooklyn. The ending is charming and a bit of meta fun, with a stellar performance by Michael I. Walters as the “Cavalcade” host.  The grit and grime have been softened, the story has been lightly sweetened with a bit of an upgrade, but the engine and its heart is running smoothly without one loud back fire to be heard.  It’s a solid BANG, ZOOM! “To The Moon!” (one of the most sentimental, delicately balanced, and love-filled numbers in the show), and although it might never be the hit on Broadway it might be aiming for (although who knows, take a look at the still running A Bronx Tale), it will have the kind of success Ralph Kamden always dreams about. 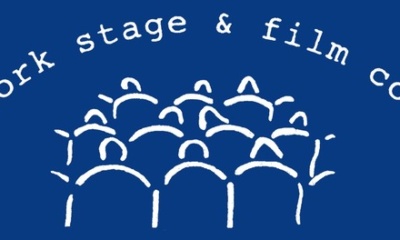