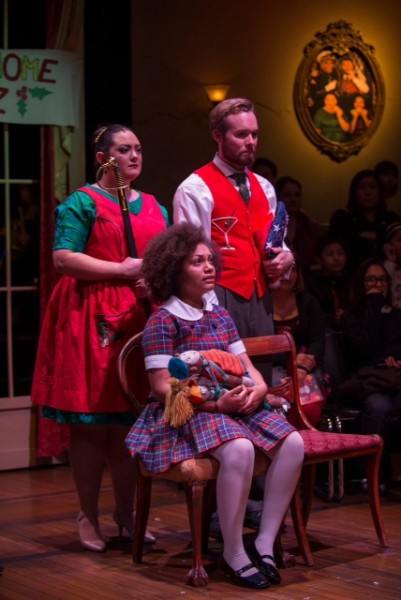 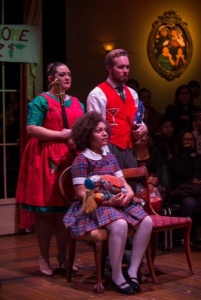 If you are looking for a contemporary holiday themed treat to share with the entire family, look no further than the House Theatre and their delightfully clever annual production of The Nutcracker. Passing on the quintessential Russian ballet tights and jettisoning the Court of the Sugar Plum Fairy, this Nutcracker is filled to the brim with merriment, mirth and a few compelling strums on the old heartstrings. Created by Jake Minton, Phillip Klapperich, Kevin O’Donnell and Tommy Rapley and based on the story by E.T.A. Hoffman, this modern day holiday production wove together bold puppetry, an original soundtrack and a heartwarming story.  Proving itself a powerhouse with artfully crafted and avant-garde storytelling, The House Theatre of Chicago’s 15th season is served well by this troupe, lead by director and choreographer, Tommy Rapley. Witty, wonderful and thoroughly refreshing, unwrap the gift that is the non-ballet Nutcracker while you still can. 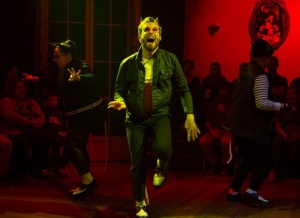 The story centered around young Clara (seventeen year old sensation, Ariana Burks) and her personal journey to save Christmas in the face of tremendous familial grief. Her older brother (Desmond Gray) a fallen solider whose spirit returned in the guise of a magical Nutcracker.  With her assortment of misfit toys along for the journey, including a yarn-haired doll (Rachel Shapiro), a dancing monkey (Ian Maryfield) and intellectual Robot named Hugo (Joey Steakley) this collection of improvisational maestros amused as they entertained. Facing a troika of rotten rodents played by Nicholas Bailey, Amanda De La Guardia and Torrey Hanson, and a magnificently sculpted giant Rat King marionette, crafted by Puppet Master, Lydia Hanchett, Burks’ Clara emerged triumphant, both saving Christmas for her extended family and entertaining an engrossed audience. This young talent continued to engage with both her melodious voice and compelling characterization. Supported by six live musicians at every show, you will wish a soundtrack could be purchased at the story’s conclusion. Sadly, that will remain an elusive stocking stuffer. 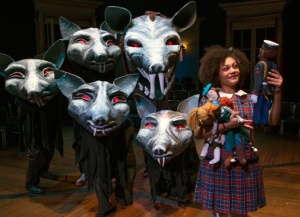 The creative team involved transformed the performance space into the ultimate theater in the round experience.  From front row snow storms to mid-story cracking wall treatments, this play is a delight for the senses. Debbie Baer’s bright costume design,  Collette Pollard’s scenic design and Lee Keenan’s dynamic lighting design will impress. Musical director Matthew Muniz orchestrates a team of six live musicians at every show, including violinists Agnieszka Likos and Jess McIntosh, pianist James Robinson-Parran, cellist Donna Miller, french horn player Marti Kallenberger and Anthony Scandora on percussion. Also, if you are lucky enough to be in the first few rows, you may be selected to enjoy a cookie with the cast at the top of the program. 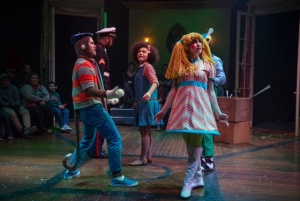 Clever, funny and overall compelling from start to finish, The House Theatre’s The Nutcracker is a proven holiday treat that continues to deliver. A contemporary take on a Christmastime classic the entire family can enjoy together. Combining the thrill of live theater, beautiful original music and extraordinary puppetry, each audience member will be rendered equally awestruck  and mesmerized.  This smaller theater troupe is limited by absolutely nothing, not even their own highly astute imaginations. After last season’s powerful United Fight 232 and the fanciful season 15 kick-off A Comedical Tragedy for Mister Punch, The House Theatre has established itself the premiere art house in Chicago. Groundbreaking, visionary and oh so clever, The House Theatre’s Nutcracker is a gift that continues to give. 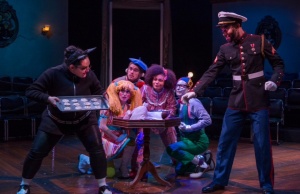 The House Theatre of Chicago’s The Nutcracker is now playing through December 30, 2016