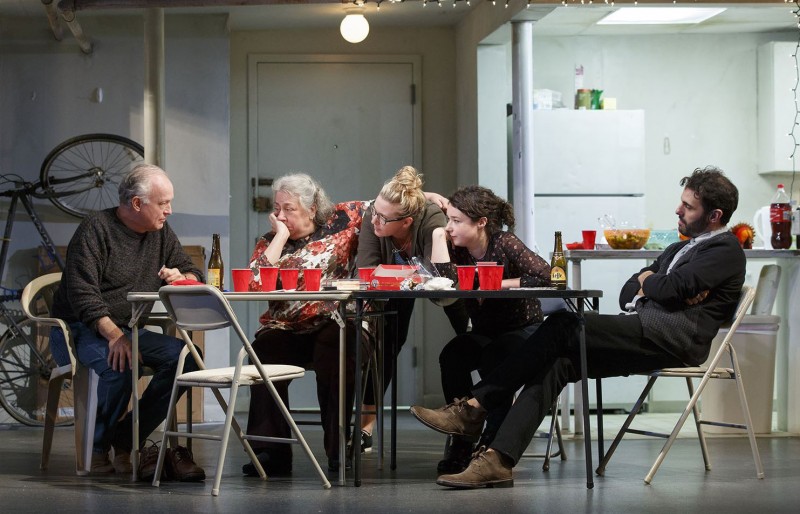 The Humans Now Visiting Family For Holiday Dinner is Drama

The Humans Now Visiting Family For Holiday Dinner is Drama

Stephen Karam’s new play The Humans, at the Laura Pels Theatre, is well acted, but uneventful. I know shoot me now, I heard most everybody loves this play. This dysfunctional family drama has a wonderful actor by the name of Reed Birney, who plays the head of the Blake family from Pennsylvania. The first moments of the play have him standing alone for what seems like an eternity. Why is it with all the new emerging playwrights we are subjected to a character just standing there in a trance? Did I miss the memo that this was supposed to be entertaining? This 90-minute intermission less play seems longer because hardly anything happens. It alludes to a haunting that is more mental than physical. We learn as time goes on that we are in Chinatown apartment of the youngest daughter Brigid (Sarah Steele) and her roommate-boyfriend-fiancé Rich (Arian Moayed) for Thanksgiving. The Blake family has driven all the way from Scranton. Presents are exchanged, as sarcastic remarks are the bows and cards unattached, but very much present.

Brigid, is a musician who tries in vain to be the perfect hostess. Rich is an academic who is living in sin with Brigid. Older sister Aimee (Cassie Beck) is a lawyer. The mother Deirdre (Jayne Houdyshell) takes care of the grandmother (Lauren Klein), in a wheelchair who constantly needs help to use the upstairs bathroom, which can only be accessed by an elevator. As night descends each character reveals the unpleasant truths. Brigid is a starving artist who has to bartend to survive and is angry her father never helped her out to be a musician. Rich, spent years recovering from a mental illness and is too poor to marry Brigid. Aimee is a lesbian whose girlfriend has died. She has quite her job due to illness and grief. Dad has lost his teaching job after 22 years and faces bankruptcy, while his wife jabs him with constant barbs for their loveless marriage. In the end they are haunted by their own realities.

Director Joe Mantello does a fine job bringing this cast together and making them a believable family.

Maybe my problem with this piece is that I have a family like this and yes, I find visiting, even thinking about them a nightmare. I see nothing new here that you won’t find in a character study.

By the way if you feel like me, we actually are not alone. Neither person on either side of me liked this play, nor did a major critic, I talked to who whispered to me of “Did I like The Humans?” When I said no, he breathed a sigh of relief. Why is it we must like the same thing. The acting is fabulous, the material, not my cup of tea, coffee or juice.