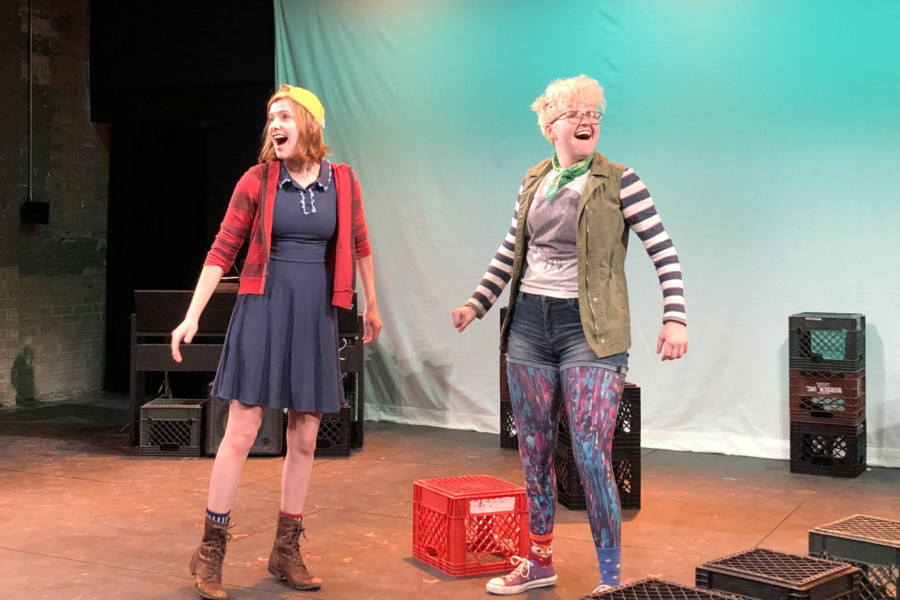 I’m so happy. Finally, I get to wax enthusiastically and unreservedly about a show at this year’s Chicago Musical Theatre Festival. The Incredible Six Thousand Foot Ladder to Heaven: A New Musical Fairy Tale, with book, music and lyrics by Ryan Martin, is the kind of beautifully crafted piece one hopes to find at a festival like this.  Mr. Martin is only a couple years out of Northwestern, where this show was developed in the student run Playground Festival of New Work.  This is its first production since. Clocking in at only seventy minutes in one act, it still feels like the seed of a bigger show to come.  But this intimate, touching musical theater piece, which stands on its own as it is, could grow into something bigger and stronger still.

The central character, Hadley Breaker, is a young tween girl played with ageless innocence by twentysomething Rachel Guth. Ms. Guth was a stand out in the Boho Ensemble production last year of A Little Night Music,  as the far more feminine and frivolous Ann Eggerman. Here she is a petulant and difficult young girl on the edge of womanhood, whose father has died.  She is acting out in her grief, which she makes clear in her terrific opening number, “Turning Around”.

Her Mom (Rachel Whyte) tries but cannot fill the gap in Hadley’s heart, or even be let in by Hadley to share her grief. Ms. Whyte gives a warm, subtle, deeply felt performance of the moving songs provided her by Mr. Martin.

When Hadley brings a long bow (sans arrows) to school, which her carpenter father had crafted for her, she gets sent home by the Principal (Jordan Pokorney, who brilliantly plays all the male roles in the show) for having a weapon in school.  She retreats with her bow to the woods, where she meets another tween girl, Spider (the very funny Maureen Sanderson).  Spider has just moved to the area, and needs a friend as well.  She is bright, geeky, and ready to play whatever game Hadley proposes.

Together, they hatch the idea to build a six thousand foot ladder to heaven, so that Hadley can go see her father again.   The ladder they build is part real, and part shared fantasy.  The adventure that follows is clearly Hadley’s attempt to find closure with her father’s death through the strength of her own imagination.

When the girls imagine that their ladder reaches all the way to Heaven, they begin to climb.  Along the way, they “meet” the Gatekeeper, who offers to bring them into the kingdom of Heaven.  Once inside the girls find that heaven consists of vast nature vistas, stages where dead singers perform, and a distant, gleaming city.  Finally, they meet Hadley’s father, who says he built that city for her and her mother when they get there.   Hadley returns to Earth, finally able to accept her father’s passing, and reconciles with her mother.   That synopsis does little to convey the beauty of the work.  But it is touching indeed.

Director Elliot Hartman does an exceptional job creating Heaven and Earth with only twenty plastic egg crates, artfully rearranged by the actors during the show. He also ensures that the fine performers give the piece the sensitive and well paced production it deserves.

Musical Director Annabelle Revak also does a beautiful job providing accompaniment for the singers which supports but never overpowers them.

This show is performed in the tiny, three quarter arena, black box theater called the Off Broadway space at the Edge Theater. While some shows are using amplification here, these singers go naked, adding to the intimacy of the experience. This kind of in-your-face, emotional power is not only what makes great musicals in general. It’s the kind of intensity for which Chicago theater is known.

It’s a good thing when a developing new musical inspires you to think about ways it can be expanded, without feeling that it needs to be fixed to enjoy watching it. In a longer version, I can imagine there might be more at school showing Hadley in her grief.  Also, there could be  flashback scenes between Hadley and her father, perhaps making that long bow, showing the bond between them. Mom might share adult moments with the husband she loses.  The music stage which exists so dad can see his favorite musicians perform would make more sense perhaps if Dad were a musician himself, and give him the opportunity for more songs of his own.  The fantasy could even get interrupted by reality, forcing Hadley to deal with it. Those are just a few suggestions for the next stage in this show’s development.

But the fine musical theater experience Mr. Martin gives us in this Festival presentation is more than enough reason to climb into whatever few seats remain to see The Incredible Six Thousand-Foot Ladder to Heaven: A New Musical Fairy Tale,while you can.

Suzanna BowlingJune 5, 2022
Read More
Scroll for more
Tap
Get Lucky at the Chicago Musical Theater Festival
An Interview with Marc Sinoway on Snowy Owl’s The Waiting Game at 59E59