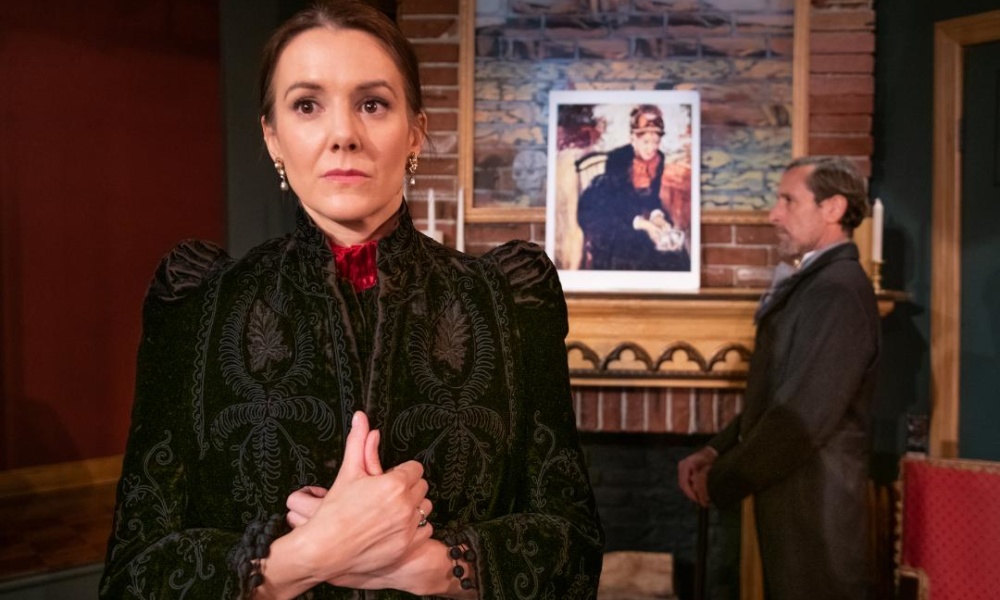 Salon des Indépendants was formed in Paris on July 20, 1884. Some of the most celebrated artists of the day were involved such as Paul Cézanne, Paul Gauguin, Henri de Toulouse-Lautrec, Vincent van Gogh and Edgar Degas (Andre Herzegovitch).

In Christopher Ward’s The Independents we learn how the first women, Mary Cassatt (Natasa Babic) was brought into the group by Degas. Their stormy relationship is depicted in this new work.

Cassatt who was born into a wealthy Pennsylvania family moved to Paris despite her parents objection. Best known for her portrayals of mother and child. Being a women in the art world was rare.

Often considered the founder of Impressionism, Degas hates the term, referring to himself as a “realist.” Few could tolerate the difficult and elitist Degas, but in Mary Cassatt he met his match both intellectually and artistically. Their stormy relationship produced paintings and sculptures that stunned the art world. Through her work with Degas, Mary Cassatt found international success as an artist and Degas found American recognition.

When we first meet Cassatt, she has invited Degas to look at her work. Having been featured in the Salon she is sure Degas will be a “gentle and caring man,” due to his work. The opposite is true. Degas is brief, dismissive and critical. The next day Degas returns unannounced to invite Cassatt to join The Independents. It is choice that means Cassatt will no longer be welcome at the Salon. Cassatt immediately joins.

We see for the rest of the play how Degas taught Cassatt printmaking and the journal they were to complete together, their cat and mouse affection and a friendship that lasted a lifetime.

Christopher Ward who also directed his piece is smart, informative and charming. By then end of the play you will have learned a great deal about these two remarkable artists and will want to know more.

Herzegovitch is highly reminiscent of Degas, and manages to make this gruff man likable. Natasa Babic has a strong presence, but her accent was more European than American and that was off putting, considering Cassatt was American.

The set design by Holden Gunster, lighting design by Matthew Sells and costumes are by Deborah Burke were perfectally period and set the mood.

You will leave the theatre after seeing The Independents, feeling more enlightened about the art world and how women were treated in that day and age.

Robert MassimiJanuary 12, 2022
Read More
Scroll for more
Tap
She Says: Kathleen Chalfant Is Luminescent in A Woman of the World
Soft Power is Irreverent Fun