The Interview: Dimitri Moise Talks About Giving the Public As Much As I Can 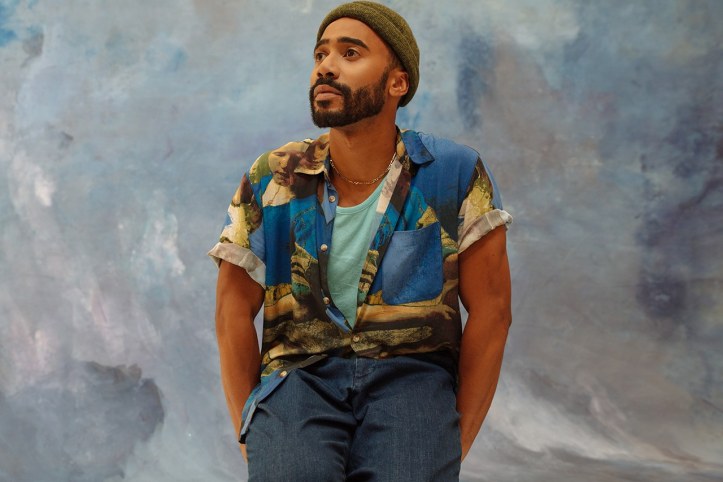 The Interview: Dimitri Moise Talks About Giving the Public As Much As I Can

Dimitri Moise is George in As Much As I Can. Photo credit: Gioncarlo Valentine.

Downtown at the Public Theater‘s dynamic Joe’s Pub, you have just a few more chances to see the unique and powerful Sarah Hall’s As Much As I Can.  The compelling piece of activist, experiential theatre will play a total of 10 performances from September 12-16 (two shows nightly at 7:00 and 9:30 PM). James Andrew Walsh will direct.

One part moral obligation, one part story within a story, one part EXTRAVAGANZA: As Much As I Can asks all of us what part we are willing to play in ending the AIDS epidemic in the United States.

It is equal parts —

As Much As I Can was created in collaboration with hundreds of gay and bisexual Black men from Jackson MS and Baltimore MD who shared their personal stories. Designed to mobilize communities to respond to the terrible fact that Black men have, and continue to be, disproportionally infected and affected by HIV, the show’s original staging was fully immersive; audience members moved from room to room with the actors. At Joe’s Pub, it will be staged to reflect the production’s intent to blur the lines between theatricality and reality. Playwright Sarah Hall said, “The show is designed so that you forget it is a fiction. We want you to feel so much a part of it that it becomes impossible to separate yourself in the way we do when we observe narratives. That could only work if it was a broadly resonant story and if we gave each audience member a role to play.” As Much As I Can was previously presented in Harlem, Baltimore, Jackson MS, San Diego and Raleigh NC.Frontmezzjunkies had the unique opportunity to have a bit of chat with one of its stars, Dimitri Joseph Moise as the clock ticks towards the end of the run at Joe’s Pub. Here’s what he had to say about As Much As I Can:

Ross: Tell me, Dimitri, how you came to be involved with this show, and what intrigued you about it?

Dimitri: This was a show that came to me through one of my agents. Any project I work on or audition for goes through my rockstar agency. I got the script during my final week on tour with Beautiful: The Carole King Musical. I didn’t actually read the script or character sides until my flight back to New York City, the day after Beautiful closed on tour and the day before my first audition for As Much As I Can. As I went through the script, I was shocked to read how vividly close this story was to my own life. When I initially went in for the show, I read for the character Delius. That quickly changed, and on the spot, the creative team asked if I would be interested in reading for the role of George. Two auditions later, the role of George was mine. It was an incredible whirlwind.

Ross: Tell me a bit about what it is like to bring all these characters to the stage and how it came to be?

Dimitri: It is quite cathartic to bring thee characters to the stage. Because this piece is immersive, the lines between reality and fantasy are blurred. My relation as Dimitri to my character George is almost identical. It’s kind of difficult separating myself from my character, which leaves me in a very emotional space, but at the same time, as an actor, this is a moment that you dream of — getting to work on something so close to your life’s story. It’s something I definitely do not take for granted. We worked on the piece for about 9 days at Middle Collegiate Church to set the community atmosphere, show blocking, and work on character development. Fun fact: Middle Collegiate was one of the only churches in NYC taking people in and caring for them during the AIDS crisis in the 80s and 90s. From there, we had tech in Joe’s Pub, and have been running the past few nights.

Ross: Tell me a bit more about your first exposure to the piece? That first reading…

Dimitri: My first exposure to this piece was when I read it for the first time, the day before my audition. It was a dark read, to say the least — I was a puddle by the time I finished. Thankfully, I’ve been able to channel that intense pain and bring it out in the experience of George each night in the play.

Dimitri: The most challenging part of this process for me has been trusting in myself in the work, and allowing myself to access deep places in my emotions and life experience. To lay it all out there is something really difficult to do for so many people, especially when you’re presenting a work that is almost parallel to your own life experiences.

Dimitri: The most rewarding has been finding the spirit of George, through this really painful work — and when I say painful, I don’t mean that in a bad way — I mean it in the cathartic sense. Now that I’ve started to discover who George is for me, I can begin to play in the world of George, how he ticks, his psyche, and his experience in the play.

Ross: What do you want the audience to get from this show and from your character?

Dimitri: I want audiences to first: feel empathy. Once they’ve felt that, I want them to do something about what’s going on. If we don’t fight the HIV epidemic together, we won’t ever see a hope of eradicating stigma or the virus. But once a person feels true empathy for a person or cause, their next step is to do something about it. That’s what I want people to do.

Tickets for As Much As I Can are available here. They are $25, and there is a $12 food and drink minimum. The show plays at Joe’s Pub (425 Lafayette Street).

Suzanna BowlingMay 6, 2022
Read More
Scroll for more
Tap
American Moor Powerfully Projects Forth Wisely
To Poe or Not to Poe