The Invisible Thread Wrapped Around My Heart 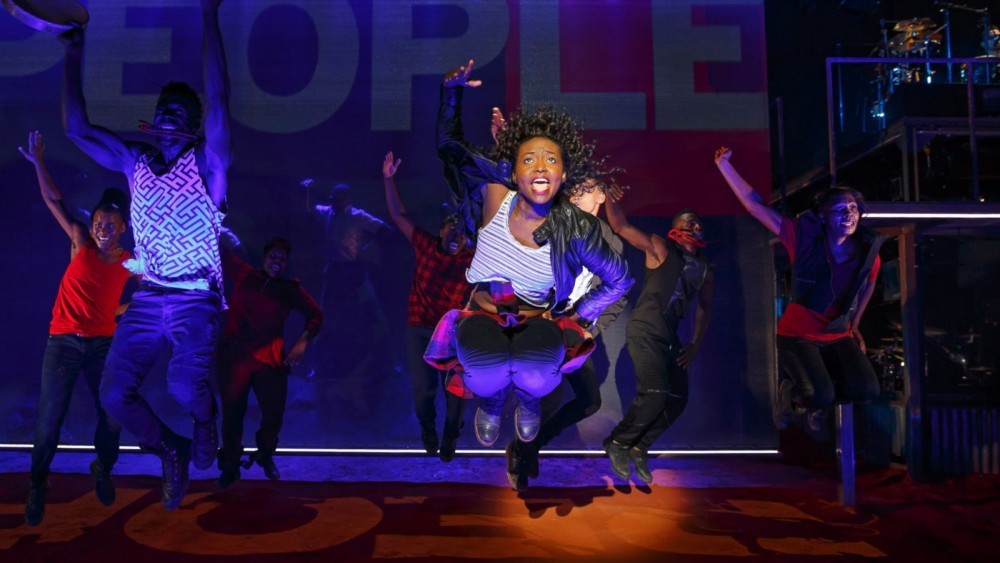 The Invisible Thread Wrapped Around My Heart

In a season inundated with gay and who are we themes Invisible Thread by and starring Griffin Matthews at Second Stage Theater makes us feel. This true story musical begins as Griffin, is being treated badly by his church for telling them he is gay. Unable to speak out loud his relationship with the Jewish Ryan (Corey Mach), Griffin heads to Uganda, instead of closer to home. When questioned Griffin retorts, “I am scared to go to the South Bronx!” 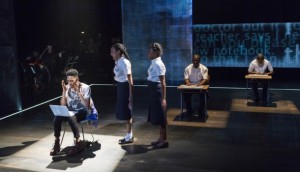 Once in Uganda, Griffin who is there to help build a school, under Pastor Jim, bonds with Jacob (Michael Luwoye) who lives and works in the compound. He informs him the pastor is not all that he seems. His sister, Joy (Adeola Role), just wants to keep the status quo. When Griffin’s backpack is stolen in jest, he hooks up with a group of teenagers Grace (Kristolyn Lloyd), Ronny (Tyrone Davis Jr.), Eden (Nicolette Robinson) and Ibrahim (Jamar Williams), whose parents have all died. They long to learn and cannot afford to go to school. You see the pastor builds these schools not to educate, but to make a profit. Griffin agrees to give them lessons. Ryan missing his boyfriend shows up in Uganda only to learn this is a country that hates and kills homosexuals. When he catches Griffin hugging Jacob, Ryan becomes upset. 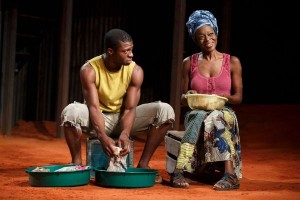 Inspired by the real experiences of Griffin Matthews and his real life partner Matt Gould (the Ryan character and the show’s conductor/ music director), this show will touch you because here is a man who doesn’t even know who he is, where his next meal is coming from, who steps out of his boundaries to help not one but five children. Directed by Diane Paulus (Finding Neverland, Pippin and Porgy and Bess), this show needed someone to hone the script. We never meet the villain of the piece. We never meet the pastor who originally causes Griffin to go to Uganda. The first act you feel as if you are watching a train wreck and you are waiting to figure out which character dies. Ironically this show is not what you think and you will not figure out where it is headed unless you know the true-life story.

The music is infectious and gloriously played and sung. The band, which is joyous, makes this show. I absolutely loved the voice of Melody Betts whose climbing vocals were inspirational. Sergio Trujillo and Darrell Grand Moultrie choreograph with excitement. I especially loved the clapping dance.

Mr. Matthews has warmth and plays himself well as does the entire cast. I was surprised to find out the children he helped were not contemporaries, because in the show they seem that way, but Tyrone Davis Jr., Kristolyn Lloyd, Nicolette Robinson and Jamar Williams make you care for them.

Yes, AIDS, corruption and poverty are semi glossed over but in the end you find out how two men gave so much of them selves that they made a difference in the lives of five people who are now giving back to others. This is a true story of paying it forward and in a season of giving this show will warm your heart.

Stephen SorokoffJanuary 31, 2023
Read More
Best of Miami Art Week
Journey Into The Carnal Side of Christmas With Nutcracker Rouge