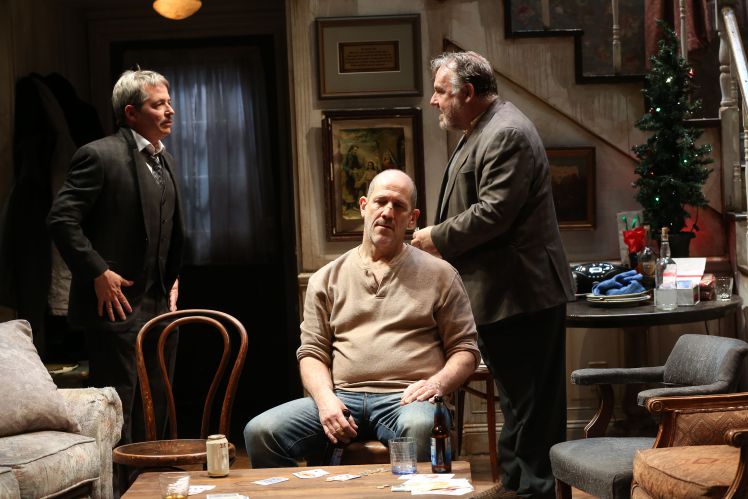 The Irish Rep’s Seafarer Sends Out an S.O.S

The Irish Rep’s Seafarer Sends Out an S.O.S

Playwright Conor McPherson (The Weir) has written a lyrically beautiful play, spoken in a predominantly working-class Dublin idiom, with moments of pure poetry. It’s basically crafted in a naturalistic style delving into a man’s haunted conscience, with echoes of some troubling family dynamics that revolve around heavy drinking, alcoholism, violence, and loneliness. In 2008, it was nominated for multiple Tony Awards; for Best Play, two for Best Performance by a Featured Actor in a Play (Conleth Hill, Jim Norton), and Best Director of a Play (Conor McPherson), with Norton winning a Tony. It also received a 2007 Olivier Award nomination for Best Play, and Jim Norton won an Olivier for Best Performance in a Supporting Role, as well as the Evening Standard Award for Best Play. So The Seafarer, McPherson’s 2006 drama, arrives at the Irish Repertory Theatre with quite the pedigree, and one would think it would be quite the solid boat, sailing over the waves with a magical ease, but sadly, this production has some small leaks in it, making it slowly sink down into the dark waters as the minutes tick by. The cast solidly makes an attempt to stay afloat, but mainly because of the not very rich or menacing portrayal of the mysterious Mr. Lockhart, a man of refined appearance but dark underlying temperament, played with a somewhat too tight control by the miscast Matthew Broderick (Off-Broadway’s Torch Song Trilogy, Evening at the Talk House) the boat keeps taking on water no matter how much is scooped out by the others.

The play centers on James “Sharky” Harkin, played with a solid edge by Andy Murray (LCT’s War Horse), a troubled alcoholic who has recently been let go from his chauffeuring job just before Christmas.  Shaky and filled with a detached veneer of guilt and shame, he hides his loss and returns home to his blind, aging, and needy brother, Richard Harkin, devilishly played, sometimes a bit too broadly, by Colin McPhillamy (Off-Broadway’s House and Garden). The home is in shambles, beautifully cluttered from top to bottom by designer Charlie Corcoran (Shining City), with concise lighting by Brian Nason (Broadway’s The Mystery of Edwin Drood) and perfectly orchestrated costumes by Marth Hally (IRT’s The Field). A burnt out bulb doesn’t do much to laminate the portrait of Jesus looking down on this muddy lot, but the metaphor sits strongly over head.

Directed with a shaky eye for blocking and a lack of lyrical essence by Ciarán O’Reilly (IRT’s Dancing at Lughnasa), Sharky attempts to stay off the bottle over the holidays; a difficult task around his hard-drinking and constantly sniping brother, a man who is both desperate and demeaning all at the same time. Conflict, not surprisingly, arrives when Richard, when he goes directly against Sharky’s earlier plea. He casually invites Sharky’s nemesis, Nicky Giblin, played solidly and slimy by the stellar Tim Ruddy (IRT’s The Weir) to join the men for a harmless Christmas Eve game of poker with Ivan, Richard’s good pal, comically played by the sweet Michael Mellamphy (IRT’s When I Was God) along for the ride in that sinking boat.

Nicky Giblin then arrives, bringing along a mysterious guest, a Mr. Lockhart (Broderick), a man who by all appearances seems polite and kind, but there is something sinister hidden away inside Lockhart’s finely tailored suit. He’s something of an insect, in a way, deaf to the Christmas carols of the night. He’s been looking for a game of poker to satisfy his soul searching. Unbeknownst to the others, he has bounded across time to remind Sharky of a prior poker game, one that occurred twenty-five years ago to the day when the two spent another Christmas Eve playing for big stakes locked up in the Bridewell Garda Barracks. After a disturbingly violent and drunken night that Christmas Eve so many years ago, Sharky wagered something big that night. Luckily he won the game and his freedom, but this Christmas Eve, Lockhart has returned, just like they had agreed to those many years ago, to have an opportunity to play one more time for the same big prize.

It’s an exciting and gripping context, this boat ride down the river Styx. The other men are gambling their pounds in hopes of a financial gain on a Christmas Eve, quite unaware that for Sharky, the stakes are much higher.  Lockhart reveals all in a series of well-written private moments with Sharky, spelling out his Mephistophelian desires and hopes, but sadly, in God’s name, Broderick feels neither poetic nor dangerous in these soliloquies. He’s an electrocuted ghost in a manner of speaking, never stoking the fire nor ratcheting up the heat that seems to be required to pull us into the game deeply. We remain casual observers, watching Ivan’s phony tears from a distance, and rarely getting that ‘last hand’ adrenaline rush. It’s a shame, as the play seems powerfully constructed and poetically engaging. Luckily, even in this middle-of-the-road production, the ending still resonates, surprising us all, even Jesus in the staircase. We can smell the whiskey and the beer from our seats, but our thirst is never quite quenched by The Seafarer.  The boat is taking water, and sinking slowly. He’s “a good man“, that Sharky, as Richard finally says, but even with Ivan’s myopia, this is not the way to pull me in.

Suzanna BowlingJuly 28, 2022
Read More
Scroll for more
Tap
New York Pops’ 35th Birthday Gala Part of His World: The Songs of Alan Menken Was Starry With The Magical Angela Lansbury
You Could Win Free Broadway Tickets For a Year With 2018 Tony Awards Challenge