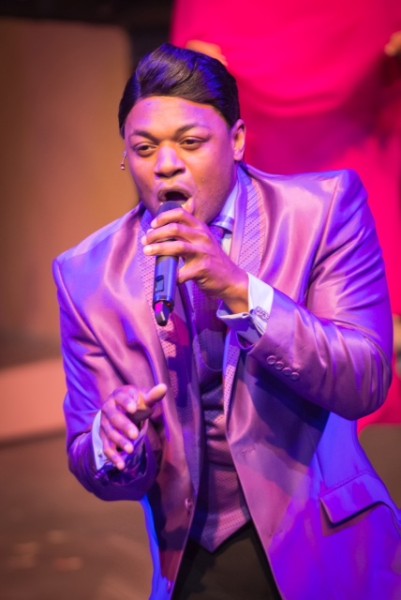 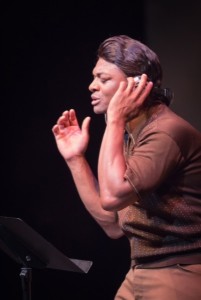 The 40th anniversary season at the Black Ensemble Theater just keeps the nonstop celebration rolling.  Just opened, The Jackie Wilson Story triumphantly returns to the Windy City stage 16 years after it initially debuted. This crown jewel in “The Season of Greatest Hits,” has been a huge hit both financially and critically for The Black Ensemble. There was even a national tour of this production back in 2002. Directed and written by Founder and CEO Jackie Taylor, the story follows the meteoric rise and subsequent fall of “Mr. Entertainment,” as Wilson was frequently christened. A master showman with a four octave vocal range and 54 charting singles to his credit, this singer-songwriter caused a fervor when performing, both on stage and off. Clearly an inspiration to recording artists as varied as Elvis Presley, James Brown and Michael Jackson, Jackie Wilson was an originator (sorry Little Richard) whose life has been given a respectful yet no-holds-barred, behind the scenes treatment, as hot on stage as it is outside during the sweltering August Chicago heat. 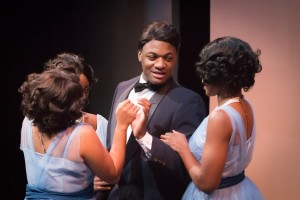 Captivating and electrifying, with rousing vocals and impressive choreography, this particular Jackie Wilson succeeds due to the triumphant, tour de force performance of Kevin Rolston, Jr. His vocals will impress and the choreography from Rueben Echoles, will astound.  Several strong, sexually charged musical routines left the audience literally fanning themselves from exasperation. A credibly stage presence, Rolston’s provocative dance moves and endless flirtation with the ladies, both on stage and in the first few rows of the audience, entertained endlessly. “There are two more buttons, baby” Rolston says beguilingly, while undoing his shirt and simultaneously scooting across the stage on his knees. But I am getting ahead of myself. That was Wilson at the height of his success.  The story follows Wilson from his precocious teen years in Detroit, singing with his mother in the kitchen then hanging out with street gangs members at night, his short stint as a boxer, then follows his rapid ascent in the music industry. It is impressive and somewhat astonishing  the story doesn’t begin to sugar coat the mob’s involvement in the music industry and Wilson’s recording contract, the mismanagement of Wilson’s finances and his addictions, which ranged from women to alcohol. Motown the Musical should have taken a note or two from Taylor’s no-nonsense approach. 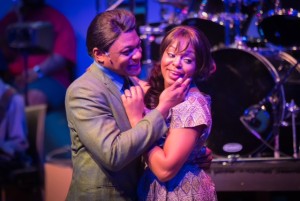 Wilson’s fiery temper and depression after his son was murdered are portrayed front and center. As is his relentless philandering. Melanie McCullough gets the most stage time as Freda Wilson, the superstar’s first wife. Her most effective line, just as she was planning to leave her husband, sharing their two children shout “Mama, here comes Jackie Wilson” as the entertainer returns home from the road. Sadly, his children experienced more of a connection with  their father watching him on the television than in real life. Without question, the most influential relationship in Wilson’s life was the one he shared with his mother, Eliza. Played with quiet authority by Kora Green, an electrifying presentation, highlighted during the soulful ballad “A Mother’s Love,” a show stopping, passionate performance from a woman on the verge. 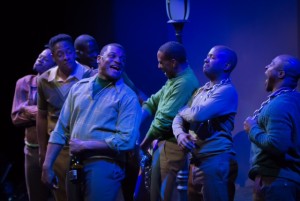 As the story progresses, we remained in the presence of a man as talented on stage as he was cursed with demons off. His “act” was clearly stolen by Elvis Presley, right down to the hip swivel. Working on the road is what brought the money in when the records sales started to dwindle. The longer Wilson stayed out on the road, the more he drank. The more he drank, the more he went through women. This vicious cycle took its toll on every significant relationship in Wilson’s life but one. BB (Rueben D. Echoles) a charming combination of best friend, enabler and savior, who never lost faith in the singer. It was BB who expressed the not so subtle nod to the idea it was the mob who put something in Wilson’s food which caused the massive onstage heart attack in 1975 that put Wilson in a coma for the better part of a decade. Coinciding with the time Wilson was about to testify against them in a Federal case. While Wilson had abused alcohol for years, this is not disputed, he had cleaned himself up at the end, which made the heart attack so much more suspicious in the mind of BB. This never ending tragic carousel  ride between fame and drug use continues to echo through the entertainment industry, even today. Just look at the untimely passing of so many greats including Jimi Hendrix, Amy Winehouse, Whitney Houston and most recently Prince. Another cautionary tale of drug abuse hidden behind the shimmering and glamourous surface world of success. A hard lesson no one appears to learn until it is far too late. 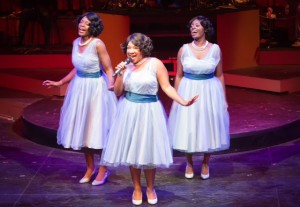 Musical director Robert Reddrick and his talented Black Ensemble Band supply the essential melodious backbone behind Wilson’s most popular hits. “Lonely Teardrops,” “To Be Loved,” “A Women, A Lover, A Friend” and a particularly rousing, soul and gospel tinged version of “Danny Boy” are all worth the price of admission alone. Some of Wilson’s chart rivals also get the opportunity to shine, including Frankie Lymons’ (Kyle Smith) be-bopping “Goody Goody” and girl band, The Crystals (lead by Jessica Seals) “Dah Do Run Run.” Ruthanne Swanson’s brightly colored costumes certainly take a lickin’ as Rolston’s Wilson frequently does the splits at the conclusion of his robust numbers.  The seams on his trousers must be as resilient as the performer himself. Denise Karczewski lighting and set were capable as well, although there were repeated lighting snafus the day I attended.  All was forgiven as soon as the ensemble began singing “(Your Love Keeps Lifting Me) Higher and Higher.” A doubly fitting ending, first with the troupe singing the 1985 Commodores hit “Nightshift” a #1 charting pop song written in loving memory to Wilson and Marvin Gaye and Jackie Wilson’s own son, Thor, being in the audience on opening day. To quote BET writer and director Jackie Taylor “You never know what will happen at the Black Ensemble Theater.”

The Black Ensemble Theater’s The Jackie Wilson Story is now playing through September 4, 2016