The Kingmaker a One Sided View of Imelda Marcos 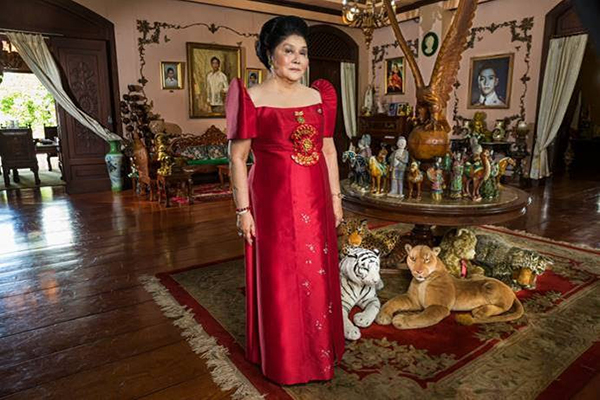 The Kingmaker a One Sided View of Imelda Marcos

Politicians are corrupt no mater where they are. In Lauren Greenfield’s The Kingmaker, a one sided view of Imelda Marcos, former first lady of the Philippines is shown. She is trying to get her son Ferdinand “Bongbong” Marcos Jr. elected vice president. Imelda is eager to pass her family’s power to a new generation and it seems like this is a probability.

Dressed to the nine’s and immaculate makeup, Marcos now 90 tours the streets handing out money to the poor children. She refers to herself as the mother of this country. She’s rubbed shoulders with Richard Nixon, Fidel Castro, Mao Zedong, and Saddam Hussein. She was shipped around the world so Marcos could maintain his affairs, but while that happened she made the Philippians the center of the world, something she is not given credit for.

Ferdinand Marcos murdered and tortured his citizens after declaring martial law. The family had and still has hidden wealth, real estate and a hoard of shoes and clothes. Under Marcos’s rule the Philippians increased industrialization and the creation of solid infrastructures nationwide, such as the North Luzon Expressway and the Maharlika Highway. Marcos did this by appointing a cabinet composed mostly of technocrats and intellectuals, by increasing funding to the Armed Forces and mobilizing them to help in construction. Marcos also established schools and learning institutions nationwide, more than the combined total of those established by his predecessors. Much of this is in disrepair or gone now. The Philippine’s Gross Domestic Product quadrupled from $8 billion in 1972 to $32.45 billion in 1980 and enjoyed its best economic development since 1945. The Philippine government also borrowed a significant amount of foreign debt in the early 1980s. The Marcos family stands accused of siphoning around $5 billion to $10 billion from the country. Though many of their treasures were confiscated by the Presidential Commission on Good Government (an entity established by Marcos successor Corazon Aquino), they’ve stashed a number of valuable artworks that can be sold whenever they need an influx of cash.

There are many odd images in this film. We see the preserved body of Ferdinand Marcos in his mausoleum. Imelda leans over her dead husband, kissing the body. The film reveals how she has continued to seek power for herself and her family. She states she “misses the clout of being first lady” and wants “to vindicate the family honor.” She speaks like a broken record to suppress reality and comes off as delusional. It seems this started when she had a nervous break down and need to find a way of coping.

The saddest part of the film is how the Marcos’s displaced 250 families from an island to make way for African zebras and giraffes to be transported there. These animals have not been taken care of nor shipped back to where they belong. The whole situation is a disgrace.

One wonders where Ms. Greenfield gets her entire point of view. Even now Imelda Marcos has been elected four times to the House of Representatives. Her son Bongbong ran for and was elected Governor of Ilocos Norte in 1998. Later on, he was elected as Representative of the Second District of Ilocos Norte from 1992 to 1995, and again from 2007 to 2010. In 2010, Marcos was elected as Senator of the Philippines under the Nacionalista Party. In 2015, Marcos ran for Vice President of the Philippines in the 2016 election. With a difference of 263,473 votes, 0.64 percent difference, Marcos suffered a narrow and controversial loss to Leni Robredo. For a family so hated, how did the end up getting elected by the people?

I took a relative of the Marcos’s and though she has faults with her relatives, she told me for the first time the Philippines were clean, drug free and you could be proud to have other countries visit. This was no longer the case under the rule of Corazon Aquino. They were just as corrupt and the country’s programs were taken away. How else do you think the family could still be elected. The Philippians like this country is torn.

“Perception is real, and the truth is not,” states Imelda Marcos steeped in  her vanity and ambition. During the film the current Presidente Rodrigo Duterte, is seen with a series of bloody street shootings, captured by local still photographers and Greenfield’s cameras. What it doesn’t say, was this was the gang members and drug dealers that flourished under Aquino.

Imelda speaks about how she smuggled diamonds in diapers when the family was forced to go into exile. The film talks about the poverty of Philippine’s. What I could not understand is why doesn’t the goverment just put all those shoes and gowns on auction at Christie’s, or at least sell them on e-bay.

In the end of the film, who you feel sorry for are the wild exotic animals who are heartbreakingly in need of rescue. Where are the animal activist and how was this allowed to continue? Now that’s a documentary.

G. H. HARDINGJanuary 19, 2021
Read More
Scroll for more
Tap
The Glorious Corner
Martin Scorsese’s The Irishman Took Over The Belasco Theater and is Selling Out Despite Problems.